On Passing by the Precious Blood 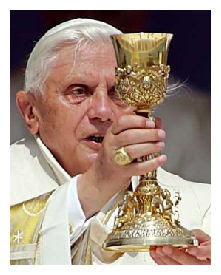 Today I was scheduled to be the EMHC (Precious Blood). As I stood there, I noticed that those folks not receiving from the Chalice passed right by without acknowledging Jesus with a bow. Now I won't speculate whether or not they believed He is truly present. I hope it was just an oversight on their part.

The reason for this post is because a few months ago one of my friends in Hawaii emailed me that their Pastor had instructed the parishioners to bow when passing by the Chalice containing the Precious Blood, whether or not they were receiving. She asked if I had heard of this.

Think about it. If Jesus was standing there in His human form. Would you walk right passed Him without acknowledging Him with at the very least a nod? It's the same thing. When we pass right by without any small acknowledgment, aren't we ignoring our God?

As we left the Cathedral following Confession yesterday, Joey posed a question in the similar vein. He asked whether or not we should cross ourselves when passing a Catholic Church, each time we passed, even though we may have just passed it. He was afraid of falling into an OC type of automatic response.

So I told him to imagine his Dad standing there. Would he ignore him the second time he passed by him? Of course, he replied "No".

It's in these little occasions we have to acknowledge the living God, that we will start to understand the awesomeness of having our God living with us.
Posted by EC Gefroh Posted 8:45 AM

Thank you, Esther for posting this. It is so true and I wish all pastors and priests would make mention of this because I see this problem at every Mass myself - people passing by the Chalice of the Precious Blood without any form of acknowlegement to Jesus.

This is an interesting one. I often could not receive the Precious Blood due to my migraine's. (Transubstatiation did not prevent my reaction.) Our Servers for Precious Blood are a step back to allow us to pass. I am usually 'busy' acknowledging Christ's immediate Presense in me! I am at that moment a human Chalice. A Tabernacle.
In our large Church Christ is actually present in many places. I am facing Him no matter where I turn. But if I stop each time to bow the person behind me might trip--- which is what happened during the 'genuflect before receiving' trend.
A few years before, a very Bleesed franciscan named Fr. Jose Eduardo spoke to us about receiving on the tongue or in the hand. He said it always comes down to what most helps us remember that this is Christ: Body, Blood, Soul and Divinity.
Even though many parishioners changed how they received it brought unity-- we all chose to believe the receiving person had the best of intentions.

It hadn't occurred to me Donna, until my friend emailed me. I guess I just hadn't noticed.

Mary B, I guess we need to use common sense. One certainly doesn't want an accident to occur. One can acknowledge that Jesus is there by just glancing over and saying a private prayer. That is why I am not judging whether or not people realize it is Jesus truly present.

When the GIRM came out a couple of years ago, our priest did some really great catechesis about bowing or acknowledging the Precious Blood. Mary B has a good point about someone tripping behind you - I've been to other parishes, where no one in front of me bows before the Host or the Chalice (except me) and I do what I've learned to do...no big accidents or anything (and I would probably laugh about it right after I died from embarrassment), just near misses. But it makes me sad. That's JESUS there.

I've been EMHC before for the Blood and I am always intrigued by how the people who do not bow seem to not make eye contact either. I wonder, do they feel guilty for not taking the Blood? (The downcast eyes always seem to make me think that, right or wrong.) They shouldn't; it's OK. But really, it makes me sad...there's Jesus, right there. A little bow is the least you can do!

Sarah, the only mishap I have seen involved the Consecrated Host and that is when someone dropped it or the Priest or EMHC dropped it accidentally.

How wonderful that your parish was prepared by your priest like that.