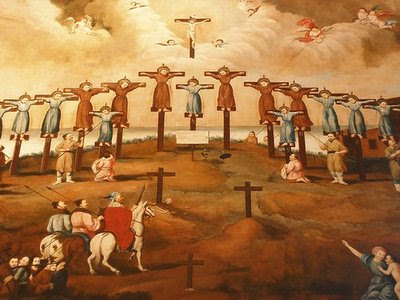 We celebrate the feast of the Japanese martyrs on February 6th.

Father Paul Miki, a Jesuit and twenty-five other Catholics sang the Te Deum as they were forced to walk 600 miles from Kyoto to Nagasaki, where they were crucified on February 5, 1597.  The concentration of Catholic Christians were then in Nagasaki, Japan.

It was thanks to Saint Francis Xavier that the Catholic faith was first brought to the Japanese people. It was from that time, the time of the Samurai until the late 1800's, that a small number of Catholics continued to preserve the faith.  Many times, this had to be done without the presence of a priest. This was the same place that many years later Saint Maximilian Kolbe would come to continue to spread the faith.  It was also the place where tragically, the Atomic bomb was dropped, devastating so many innocent lives as well as their beloved and historic cathedral.

In the book A Song for Nagasaki, Father Paul Glynn relates how the heroic Christians and martyrs in 1864 gave their lives for their Catholic faith.  These true stories of torture came hundreds of years after the twenty-six martyrs but it shows what the Catholics endured for the love of Jesus Christ.

Jinzaburo was the father of the old priest in Nagasaki whose family helped preserve the Catholic Faith.


In the bitterly cold winter Jinzaburo, (22 years old) and other Christians were plunged through the ice of a frozen pond, held under with hooked poles and fished out just in time to stay alive.  Then they were shoved close to a fire.  Then the process was repeated and the victims often passed out.


Twenty-six year old Yasutaro had died in a box too small for him to sit, stand or lie down.  He was nailed up in it and left there in the depths of winter until merciful death took him home to God, 20 days later.

When the commander and former samurai couldn't break Jinzaburo, he went after his 14 year old brother, Yujiro.

The lad was taken down a short distance from Jinzaburo's cell, stripped and whipped mercilessly.  He groaned in pain but held out.  He was tied up naked on a cross, jabbed with bamboo poles and taunted for belonging to a foreign superstition.  He was fastened onto bamboo slats that cut into his knees and ice-cold water was poured over him until he went blue.  For 14 days the lad endured such brutalities on a near starvation diet.  Finally, his body could take no more and he fell into unconsciousness.

There is no question about the cruelty of this commander in order to have the leader denounce his faith.  But God works in all circumstances, good or bad.  Even when there is evil in the works, God's hand guides.  The commander later had deep remorse for what he had done.  His son would later become a Catholic Brother, whose story must have impacted those unbelievers.

Our Catholic brothers and sisters in some parts of the world are experiencing this type of hatred and persecution.  Maybe they are being tortured even worse than the Japanese martyrs.  So we must continue to pray for the conversion of the Islamic terrorists and for the protection and strength for these persecuted followers of Christ.

I leave you with an animated film about a young Christian boy who loved Jesus deeply.  I found it while searching for the old movie. 26 Martyrs of Japan: Ware Yo ni Kateri