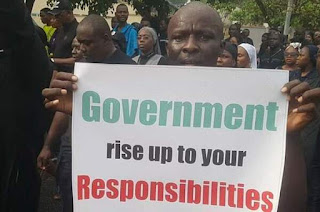 A great number of Nigerian Catholics led by the Country’s Episcopal Conference took to the streets on March 1st, 2020, to protest the high level of insecurity in the country in a bid to draw attention of the federal government and the international community to the plight Christians and to pray for peace in the nation.

The procession which took the form of a peaceful-prayer march saw the bishops, priests and the faithful dressed in black and carrying placards bearing several inscriptions such as, “Thou shall not kill”, “Life is scared”, “Government rise to your responsibility”, and “God hates injustice”.

“We are on this peaceful protest on behalf of the over 22 million Catholics and over 100 million Christians in Nigeria. We are protesting against the brutal killings of innocent Nigerians by Boko Haram, and terrorists’ herdsmen.”

“We are gathered here to register our protest against the kidnapping for ransom in every part of Nigeria. We are gathered to mourn the women, children, babies, and men who have been killed by the terrorists. We are gathered to let the Federal Government of Nigeria know that we are tired of hearing from them that Boko Haram has been “technically defeated” even when they still attack with impunity.”

The Archbishop lamented that the Government’s response to terrorist attacks is far below average. “The failure to protect innocent people from relentless attacks is evil. The lack of prosecution of terrorists is evil,” he said. He challenged the President of Nigeria, Mohammadu Buhari to fulfill his responsibility of protecting lives and property and bring those behind the killings to justice.

“The tears and pains of the helpless persecuted Christians in Nigeria should be well reported in the West. Western Journalists and Western Political Leaders should give Boko Haram the attention they give to other terrorist groups like Al-Qaeda, and ISIS.”

“If the Western media give comprehensive steadfast coverage to the atrocities happening in Nigeria, they will discover that people are dying daily in Nigeria from the hands of Boko Haram about the same way people are dying in Syria.”

Earlier in his homily at the opening Mass of the Catholic Bishops’ Conference of Nigeria’s Plenary Session held few hours before the protest, Catholic Archbishop of Abuja, Archbishop Ignatius Kaigama said that: “We cannot pretend that all is well with Nigeria. We are battling with terrorists, cultists, criminals, kidnappers, economic saboteurs, unscrupulous political leaders, religious bigots and partisan traditional rulers.”

“It seems everyone is just passing by, including those who shape our policies and into whose hands we have entrusted our security, the unity and stability, the present and the future of our children.”

He prayed: “May our prayers wipe away evil from our land, soaked by the blood of innocent citizens and melt the stony hearts of people who rejoice at the suffering of other brothers and sisters whom they keep in captivity.”

Speaking to Aid to the Church in Need (ACN), Fr. Sebastain Sanni, a Priest of the Archdiocese of Abuja who could be seen carrying the placard “Thou shall not kill”, explained: “We are all on black to mourn not only our Christian brothers and sisters that were killed by Boko Haram but to protest the collapse of security in the country, the escalated activities of Boko Haram and the government’s lame response.”

“It is raining now but this does not discourage us. We are in the rain praying the Rosary.”

Also speaking, a lay faithful, Ugochukwu Okereke, who participated in the protest alongside his wife told ACN that he was very pleased with this initiative by the Catholic Bishops Conference of Nigeria, calling it “a step in the right direction.”

He decried the unfortunate situation where Christians are kidnapped and their families asked to pay huge sums of money as ransom, only to be killed after such monies were paid. He hopes for an end to all the evils in the Country.

This is a very difficult time for the faithful in Nigeria as kidnappings and killings of Christians has multiplied in recent months. ACN invites Christians all over the world to pray for peace in Nigeria and other Countries were Christians continue to suffer and die for their faith, as well as for all victims of terror and their families.

With picture of a demonstrator in Nigeria (© ACN) 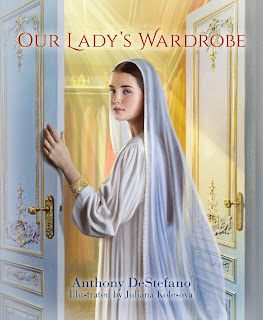 The beauty of this book is only the beginning.  What this lovely book teaches is real virtue.  Our Blessed Mother was poor on this earth and dressed simply.  Now in the splendor of Heaven, she is arrayed in the most magnificent of costumes.  At each apparition she comes splendidly dressed.

But that is not all!  What this beautiful picture book will teach girls and boys alike is modesty!  Our Lady always appeared in dresses;  long beautiful gowns that covered her from head to foot and made her look even more resplendent.

This book is a real treasure and a starting point for many conversations with children about the love of our Blessed Mother, about her exquisite beauty, her sweet and pure modesty and her promise of a Heavenly Home to come.