World Day of Prayer for China - Our Lady Help of Christians, Our Lady of Sheshan 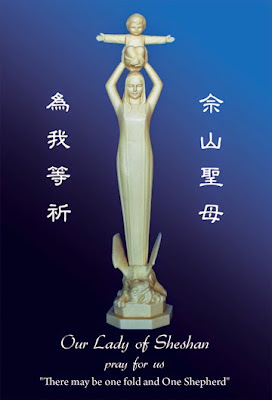 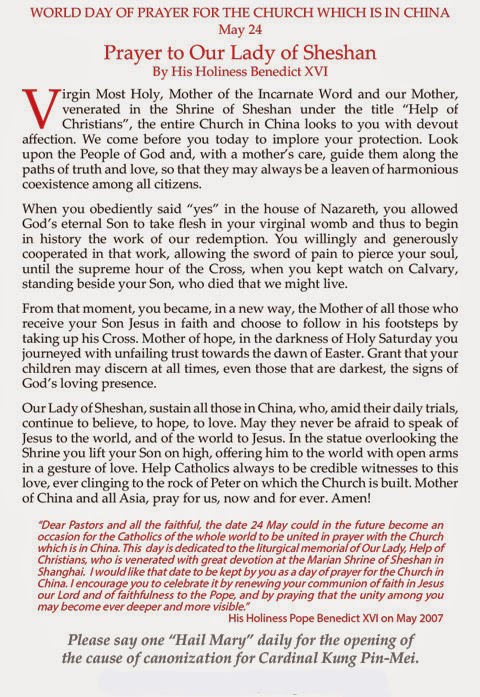 Please join in praying as our Pope Emeritus asked us to, a few years ago.

Labels: Marian: Our Lady of Sheshan

Irondale, AL – This Memorial Day Weekend, join the EWTN Global Catholic Network as we travel to the Holy Land with Pope Francis! The journey begins Saturday, May 24 and continues through Monday, May 26.
“World Over Live” Host Raymond Arroyo will anchor the event with on-site commentary by Fr. Peter Vasko; Rome Correspondent Alan Holdren will report from the Holy Land for “EWTN News Nightly;” and EWTN Rome Bureau Chief Joan Lewis will not only provide EWTN Global Catholic Radio with exclusive reports from the Holy Land, but will also serve up some sure-to-be-memorable blogs with lots of photos for viewers to share!
Watch EWTN via television, radio, live stream, or your mobile device (http://www.ewtn.com/everywhere/) so you don’t miss a moment of the Pope’s historic pilgrimage!
The official motto of this Holy Land trip is “ut unum sint,” which is Latin for “that they may be one.” It’s a fitting choice for a trip that falls on the 50th Anniversary of the famous meeting between Pope Paul VI & Patriarch Athenagoras, then Patriarch of the Eastern Orthodox Church. In addition to meeting with current Ecumenical Patriarch Bartholomew, the papal delegation will, for the first time, include a Jewish rabbi and a Muslim leader, who have been personal friends of the Pope since his days as Cardinal of Buenos Aires.
The Pope is also scheduled to pray with refugees and youth with disabilities and to meet with religious leaders from the Jewish, Muslim and Orthodox faiths as well as heads of state and ordinary citizens from Jordan, Israel, and Palestine.
Expectations for this ecumenical trip are high and, if the past is prologue, we can expect a great deal of news. Instead of getting the secular media’s interpretation of events, watch it live on EWTN for a truly Catholic perspective!
For the latest updates on events and specials surrounding this event, please visit www.ewtn.com/holyland2014/.
EWTN Global Catholic Network, in its 33rd year, is available in over 230 million television households in more than 140 countries and territories. With its direct broadcast satellite television and radio services, AM & FM radio networks, worldwide short-wave radio station, Internet website www.ewtn.com, electronic and print news services, and publishing arm, EWTN is the largest religious media network in the world.
Posted by EC Gefroh Posted 3:57 PM No comments: