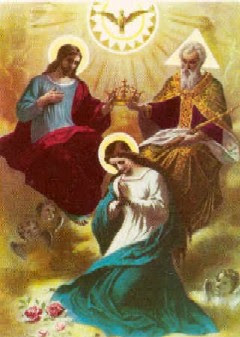 The following was the Gospel reading of the day:


There came to him some Sadducees, those who say that there is no resurrection, and they asked him a question, saying, "Teacher, Moses wrote for us that if a man's brother dies, having a wife but no children, the man must take the wife and raise up children for his brother. Now there were seven brothers; the first took a wife, and died without children; and the second and the third took her, and likewise all seven left no children and died. Afterward the woman also died. In the resurrection, therefore, whose wife will the woman be? For the seven had her as wife." And Jesus said to them, "The sons of this age marry and are given in marriage; but those who are accounted worthy to attain to that age and to the resurrection from the dead neither marry nor are given in marriage, for they cannot die any more, because they are equal to angels and are sons of God, being sons of the resurrection. But that the dead are raised, even Moses showed, in the passage about the bush, where he calls the Lord the God of Abraham and the God of Isaac and the God of Jacob. Now he is not God of the dead, but of the living; for all live to him." And some of the scribes answered, "Teacher, you have spoken well." For they no longer dared to ask him any question.

The question asked by the Sadduccees who did not believe in the resurrection of the body, may seem silly. But like the Pharisees their sole purpose of asking such a question was to trip up Jesus. Jesus never loses his cool and his reply makes an impression on some of the aforementioned scribes.

The gist of their question is interesting. What will Heaven be like for humanity...for souls...for married people? Marriage is a sacrament. When we get married we vow to be there for our spouse in sickness and in health, 'till death do us part". After we die, that will be the end of our marriage as we knew it on Earth.

Just how will Heaven be like? Will it be a place filled with fluffy clouds where everyone is happily gliding along from place to place. Or, will as Father Arminjon in his book The End of the Present World and the Mysteries of the Future Life** describes, there will be a total restoration of creation that "will take place as soon as the ruin of the universe has been consummated." He further quotes Saint Anselm who describes the new earth as: "This earth, which sustained and nourished the holy body of the Lord, will be a paradise. Because it has been washed with the blood of martyrs, it will be eternally ornamented with sweet-smelling flowers, violets, and roses that will not wither." David also wrote: "When You send forth your Spirit, they are created; and You renew the face of the earth."


"The universe will then be subjected to other laws; the sun and the heavenly bodies will no longer execute their revolutions, and the heavens and the earth will remain stable and at rest...."

The following is what awaits the elect in Heaven:


"...There will be no more disease, no more death, and therefore no nourishment, no procreation, and no differentiation of sex. our flesh, at present weak and subject to a thousand ailments, will become impassible, endowed with a strength, solidity, and consistency that will free it forever from all change, weariness, and alteration..."

God in His infinite wisdom has not disclosed what Heaven will be like. But one thing is certain. He has promises us paradise and those of us worthy to be called the elect, will not be disappointed with our true home.

The Crucifixion of St. Peter

Learn the truth about the ACLU.
Posted by EC Gefroh Posted 11:43 AM No comments:

Sophia Institute Press is known as an outstanding publisher of Catholic books, from Catholic classics to contemporary fiction.  Over the last forty years the Press has made a major contribution to what has been called the “John Paul II generation”—people who have returned to the traditional teachings of the Church as the true hope of humanity.

For the past ten years Catholic Exchange has led the way in the use of new media for evangelization.  Screenwriter Barbara Nicolosi has commented: “Catholic Exchange is just what the Church of the 21st Century needs.  It isn’t just a tool of the New Evangelization called for by John Paul II; it IS the New Evangelization.”  Every weekday CatholicExchange.com features stories from the contemporary press and timely articles, columns, blog posts, and podcasts on how the message of Jesus Christ addresses the crucial problems of everyday life and fulfills the deepest desires of the human heart.

Working together, Sophia Institute Press and Catholic Exchange will bring an enriched menu of traditional and new media content to Catholics looking for practical help and inspiration.

Sophia Institute Press is the publishing division of Holy Spirit College in Atlanta, GA and the Thomas More College of Liberal Arts in Merrimack, NH.  Gareth Genner, President of Holy Spirit College, serves as Chairman of the Board, while Thomas More College President William Fahey oversees the Press’s day-to-day operations as its President and Publisher.  Sophia’s Board of Directors is comprised of an equal number of representatives from each college.

Gareth Genner commented: “This is the next step in the creation of a media company dedicated to the new evangelization.  We expect great things from the synergy of the Press and Catholic Exchange.”

“We have already explored,” William Fahey said, “a few of the many ways in which the two enterprises complement one another.  We look forward, for example, to the use of Sophia’s books as the basis of certificate programs in biblical studies, theology, spiritual formation, canon law and other subjects that will be offered through Catholic Exchange.”

Harold Fickett, who has led Catholic Exchange for the past two years, will continue to oversee new media operations, serving as Editor-in-Chief.  “I am tremendously grateful,” he said, “to Sophia Institute Press for providing a stable platform from which Catholic Exchange can grow.  Those who have supported us can now look forward to their efforts bearing fruit for Christ and his Kingdom in the years to come.”