ACN-USA News - From a nun in Syria, a message of hope and faith in the time of the coronavirus 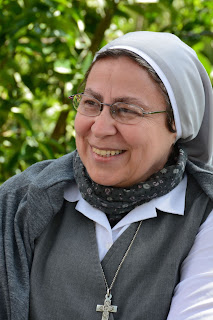 An intrepid nun, who coordinates emergency relief in Syria, has responded to the coronavirus pandemic by sending a message of prayer and solidarity to friends and donors of Aid to the Church in Need (ACN).

In an audio message sent today (March 27), Sister Annie Demerjian, a leading Syria project partner of ACN, tells donors: “do not panic” and “follow the instructions about healthcare.”

A member of the Religious of Jesus and Mary, Sister Annie thanks ACN donors for their near decade-long help providing food baskets and sanitary items, clothing and medicine for the most vulnerable in Aleppo and elsewhere in Syria.

Sister Annie is pledging to pray for donors in this time of emergency.

Sister Annie says: “It is very painful what the world is passing through at this time. In this situation of the coronavirus, do not panic about the news. Follow the instructions about healthcare.”

Describing how she and her fellow women religious are praying the rosary every day “for the world,” she says: “Our faith is not like pressing a magic button and expecting everything to be OK.

“The pain and suffering are there, but we must also not forget that the resurrection is there every day.”

Drawing on her experiences in Aleppo, in northern Syria, Sister Annie adds: “We need to help those who are most in need. We need to help each other, lift each other’s spirits and things will pass.”

Warning of the impact of the virus on a Syria still reeling from years of conflict, she reports: “In Aleppo, our groups of volunteers are continuing, visiting homes where it is safe to do so and taking great care.

“We are helping the old people, especially because so many of them have no other support, and in Damascus our Sisters are helping some old people, buying what they need so they will not have to go out. People have nothing to rely on. How will they survive?”

She goes on to report on progress with a supermarket voucher scheme for 260 families, especially for elderly people dependent on them, and a rent-payment scheme for the most vulnerable.

Sister Annie adds: “To all our ACN donors, we say very sincerely: ‘Thank you for your enormous generosity. You have helped us for so many years and continue to do so.’

“May God continue to bless you and keep you and your families safe and well.”

To listen to the full audio message from Sister Annie, please click here.


This is a beautiful collection of Archbishop Fulton J. Sheen's reflections on prayer.  His lessons on prayers are carefully ordered and arranged to help the reader understand what it means to pray, how best to do so, and what means we may use to foster a deeper relationship with God.

The first chapter gives the Archbishop's sermons on the Seven Last Words of Christ from the Cross.  The mediations are profound thoughts from someone who has deeply pondered the Passion of our Lord.

The second chapter explains the relationship between Calvary and the Mass.  It is a Missal Companion that offers meditations on the main parts of the Mass.

The third chapter explains the importance of the daily Holy Hour, offering seven meditations and reflections that can be used during a Holy Hour.

The fourth chapter includes the Archbishop's beautiful thoughts on each Station of the Cross.

The fifth chapter offers various reflections on different aspects of the spiritual life, such as faith, prayer and sacrifice, the Holy Eucharist and the Blessed Mother.

The sixth and final chapter includes various prayers taken from different saints to be used as starting points for personal prayer and meditation.

This is a lovely and comprehensive selection of Archbishop Sheen's thoughts and counsels on prayer.  It will make a fitting companion to any collection of the Archbishop's books as well as an excellent source of meditation during Lent and Holy Week.
Posted by EC Gefroh Posted 8:28 AM No comments: 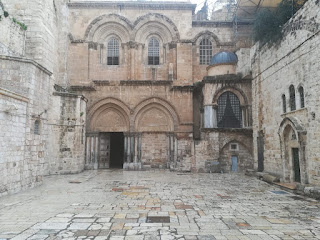 BECAUSE of the COVID-19 pandemic confinement measures, pilgrims are staying away from the Holy Land. The streets of Jerusalem will be quite empty at Easter. The cancelation of pilgrimages will have serious repercussions for the religious tourism industry on which many Christian families in Israel and the Palestinian Territories depend.

The coronavirus in the Holy Land has already forced thousands of pilgrims to leave. Clearly, “many Christians will suffer from this, especially in Bethlehem, because they are employed in the tourist sector,” said Friar Ibrahim Faltas, who is in charge, among other things, of relations with the Palestinian Authority and Israel for the Custody of the Holy Land.

"Without pilgrims, no one works," he told Aid to the Church in Need (ACN). This is the more so since everything is interconnected in the economic ecosystem of Christians of the Holy Land: revenues from tourism fund social and pastoral works carried out by Christian institutions through parishes, shrines, schools, hospices, retirement homes, etc. Many Christians can thus have “a worthy job” to support their families, as Cardinal Leonardo Sandri, prefect of the Congregation for the Eastern Churches, said recently.

At present, “with the forced closure of all hotels, bars and restaurants, most of our employees are at home, out of work. The same happened in the past at the time of the intifadas. We do not know how we will be able to pay everyone for a long while,” said Friar Alberto Joan Pari, also of the Custody.

He said that all the guest houses run by the Franciscans in the Holy Land are now closed. Souvenir and craft shops, as well as transport companies (taxis, buses, car rentals) are teetering on the edge. The small family-run businesses are not strong enough to withstand such a shock.

In the past, when the Holy Land experienced wartime conditions, some people managed to temporarily find an economic niche outside tourism. However, the pandemic measures have affected all business sectors and everything is closed

He is conscious that the situation could get worse for local Christians if the “Good Friday collection” is postponed, as he fears. This collection is meant to show the solidarity of Catholic Churches around the world with the Church in the Holy Land. It is also one of the main sources of revenue for the upkeep of the holy places, the welcoming of pilgrims and the support for the local Church in Jerusalem and the Middle East in their efforts to ensure that Christians remain in their countries.

“For the moment, the Good Friday collection has not been canceled, even though the faithful in Europe and probably in America will not be able to go to their churches to make their donations. There are plans to move the date for the collection the summer, but nothing is certain,” said Friar Alberto. Without a collection, "the loss would represent 80 percent of our income," warned the Franciscan.

On the Palestinian side, the authorities quarantined the city of Bethlehem in mid-March. Schools and universities (including Christian institutions), mosques and churches are completely closed, including, since March 5, Bethlehem’s Basilica of the Nativity, the birthplace of Jesus. “In the past, it was only closed in the event of war or siege [as in 2002],” said Friar Alberto.

Meanwhile, the atmosphere in the Holy Land is gloomy. On March 12, the Franciscan Pilgrims Office in Jerusalem canceled until further notice all Masses booked by pilgrimage tour companies at Holy Land shrines. On March 25, Israeli authorities closed the Holy Sepulcher Church.

In Jerusalem, the streets are mostly empty "Just to think that only a month ago, pilgrims couldn’t find a place to sleep! It was very crowded. But now, no one is left, the last American pilgrims left last week," said Friar Ibrahim.

Everyone hopes to see things get back to normal after the summer for the other pilgrimage high season of the year in September and October. Meanwhile, pilgrimage tours have been canceled through August.