Messages from Our Lady of Fatima

We will be sharing the message on Fatima in a format that can be pinned on Pinterest or shared on social networks.  Our Lady's message has never been more urgent.  Please help us to save souls by sharing Our Lady's messages. 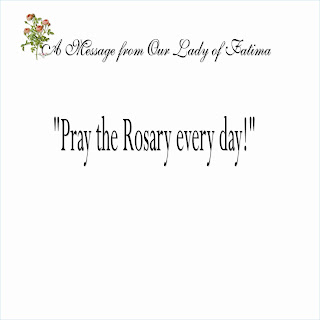 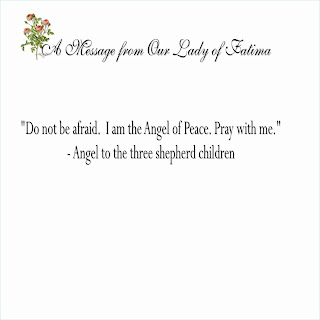 The Most Holy Name of Mary 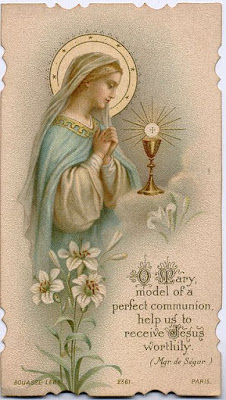 Mary was a common name among the Hebrews because it recalled the memory of Miriam, the sister of Moses and Aaron. For this reason some scholars think this name is related to an old Egyptian word meaning beloved. This understanding certainly fits Mary of Nazareth. She was so beloved by God that she was always in the right relationship with Him. Out of love God chose her to be the mother of Jesus. Love is about the whole person, the entirety of her being, one whose very name is beautiful.

Every September 12 we honor the Holy Name of Mary in our liturgical calendar. St. Bonaventure prayed, “Your name, Mary, cannot be spoken devoutly without bringing with it some grace." We honor Mary’s name because it is a sacrament of the person. To know Mary’s name is to know her. To speak her name with reverence is to be familiar with her who was most familiar with God. In some Asian countries she is known by names that mean one who hears our cries.

May we always honor the name of Jesus’ mother and our spiritual mother. When in need, call on Mary. 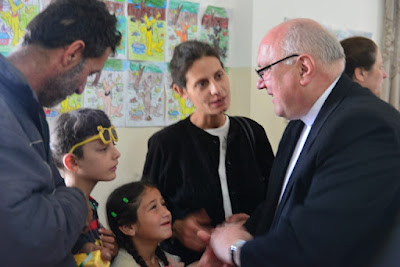 The apparent willingness of major European countries—including Germany—to take in refugees from the Middle East is spurring growing numbers of Syrian Christians to find ways to emigrate, reported an official for international Catholic charity Aid to the Church in Need (ACN).

Currently on a fact-finding mission in Syria, Father Andrzej Halemba, who heads the Middle East desk for ACN, said that “the discussions in Europe have also been noticed here.”

“Many wish to leave, and especially the Christians. I have often been asked if I can help people to move to Germany, for example. But the aim of our work is to facilitate a future for the people in their own country."

The priest acknowledged the “ever greater instability in Syria. The military success of the ‘Islamic State’ causes fear and anxiety especially among the Christians.”

“The future of the city of Aleppo, where many Christians still live, is uncertain."

However, there is success on the part of ACN-supported project partners who are helping refugees and internally displaced people. "They are working for the benefit of the people in an ever more efficient and coordinated way,” said Father Halemba.

He cited the example of the Christian town of Marmarita, near the Lebanese border, where aid has made a huge difference: “One boy, when we met, only said one word in Arabic: shukran, ‘thank you.’ Everyone was very moved by that.”

“An old woman pleaded with me, with tears in her eyes, to go on helping the Christians in Syria so that they could stay,” the priest reported.

The young dentist Sana (name altered) heads team of volunteers in Marmarita—which is bursting with refugees. She said: "Marmarita is safe. We do not hear any bombs or explosions here.”

“But the cost of living has become very high, and the people have hardly any jobs. Our work is focused mainly on helping people pay their rent, as well as providing medical care and tuition subsidies.”

Nearly 300 families are currently receiving rent subsidies from ACN, which is also paying for the travel expenses of 140 students attending universities at a considerable distance from the town.

Father Halemba emphasized that his organization not only provides humanitarian aid, but also continues to put a premium on supporting pastoral projects.

"In the city of Qusayr, for example, we have funded the renovation of a church that was destroyed by jihadists. This gives the people hope that life can go on.”

“The Church must give the people bread with one hand and the Bible with the other. People need material as much as spiritual aid,” the priest said.

He is already concerned about the coming winter. "Fuel and gas are in short supply in Syria and very expensive. But the people rely on these for heating.”

“Last year some 50 people died from the cold. We will therefore need to pay particular attention to aid for the winter,” said Father Halemba.

Aid to the Church in Need has given more than $8M in aid to the people in Syria since the outbreak of the war in 2011. The organization currently supports some 140 humanitarian and pastoral projects in Syria.

With picture of Father Halemba with refugees in Marmarita, Syria (© ACN)