Joachim is the name which tradition has given to the father of the Blessed Virgin.  According to that same tradition, the Blessed Virgin was born during the old age of her parents and in answer to their prayers.  Saint John Damascene says of these parents, "By your fruits are you known; you have given birth to a daughter who is greater than the angels and has become their queen."

Saint Anne... is believed to have given our Lady to the service of the Temple at the age of three.

Posted by EC Gefroh Posted 11:54 AM No comments: 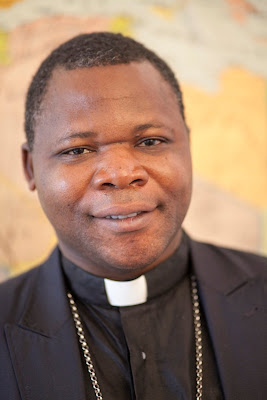 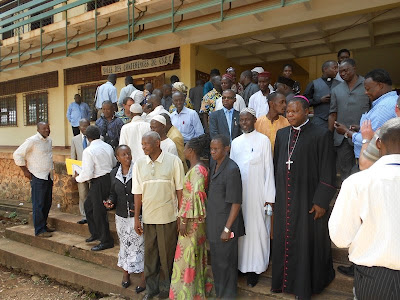 In his sermon last Sunday, 21 July, in the Cathedral of Notre Dame in Bangui the Archbishop of Bangui, Dieudonné Nzapalainga, had clear words to say:

At the same time he forgave those who saw him as a "political opponent" or "wrongly" ascribed to him "political ambitions and power aspirations". He declared: "I am a shepherd, not a political fighter. I dare to hope that one or other person will hear in my voice the Central African people's cry of suffering."

The Holy Mass was being held on the occasion of the first anniversary of his episcopal consecration. On 26 June of this year, Archbishop Dieudonné Nzapalainga received the pallium from Pope Francis together with 33 other Archbishops from throughout the world. Last Sunday was celebrated in the capital of the Central African Republic as "Action of Mercy".  At the same time, services were held in many countries for peace in the Central African Republic. This international day of prayer had been initiated by the order of Carmelites in Italy, which maintains five missions in the Central African Republic. The international Catholic pastoral charity "Aid to the Church in Need" had also invited the faithful throughout the world to pray on this day for the people of this country as it descended into violence and chaos.