On Novenas and Trusting in God 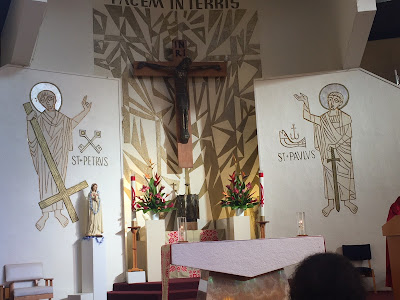 For someone who really did not like to be tied down to praying novenas for nine days,  I have come to love a few of them very much.  The following are some of favorites:

1.  The oldest novena known is the Holy Spirit Novena.  We pray that one for the gifts and the fruits of the Holy Spirit.  The novena ends on the vigil of Pentecost.   That one is the best novena anyone can pray.

2.  The second highly recommended novena is the Divine Mercy Novena which the Church prays starting on Good Friday and ending on the vigil of Divine Mercy Sunday.  We pray for the intentions of many people and the salvation on their souls.  Very powerful and we have Saint Faustina via St. John Paul II to thank for this novena.

3.  Saint Mother Teresa's Express novena is also one that helps a lot especially if you need help right away and don't have 9 days to wait.  You simply pray the Memorare nine times in a row.

4.  One of the newer novenas which is recommended by Pope Francis is the Mary, Untier of Knots novena.  This novena helps with things that complicate our lives or seem impossible to untangle.

5.  My own personal favorite is one that I have been doing for members of my family or my own personal intentions like before I travel.   It is a Mass and Holy Communion Novena and it entails 18 days total with nine in Petition and nine days in Thanksgiving.


Plot out 18 consecutive days hopefully ending with the vigil of a feast or solemnity.

1.  The first nine days are Novena for Petition.

- Mass intentions and attendance at Mass
-  During the Consecration at the elevation of the Precious Blood Chalice I again make the prayer request.
- Offering my Holy Communion for that particular intention

Optional:  Daily Rosary for that intention.

2.  Second 9 days are the Novena for Thanksgiving.

This is important because we should be confident God will answer our prayer request.  Whether He answers it in our time, His time, our way or His way, is up to Him but He will answer it.

- Mass in Thanksgiving and attendance at Mass.  If you can request Mass intentions for Thanksgiving that would be great.
- During the Consecration at the elevation of the Precious Blood Chalice I thank God for answering my prayers.
- Offering my Holy Communion in Thanksgiving. 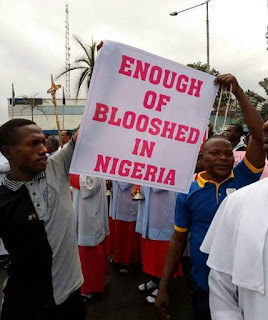 “PLEASE DON’T make the same mistake as was made with the genocide in Rwanda. It happened under our noses, but no one stopped it. And we know well how that ended.” These are the words of Bishop William Amove Avenya of the Diocese of Gboko, in Benue State, where Christians form the majority of the population.

He is only the latest of the bishops of Nigeria’s Middle Belt to have raised his voice to denounce what is an increasingly worrying phenomenon—the attacks by Islamist Fulani Herdsmen on Christians in the region.

In recent days there have been new attacks in the area of Jos, the capital of Plateau State, killing more than100 people.

The Fulani Herdsmen have herded their flocks in parts of Nigeria’s Middle Belt for centuries and there have always been occasional clashes with local peasant farmers, the majority of whom are Christians today, and whose crops were frequently trampled and even destroyed by the herdsmen’s flocks.

Whereas in the past these conflicts were generally either tribal in nature or driven by economics, today they appear to have become increasingly religion-based in character.

According to official data, there have been 492 victims since the beginning of the year in Benue State alone. “They are criminals and terrorists, but they do not do the same things in the majority Muslim areas,” Bishop Avenya charges.

He added: “We are convinced that what is happening is an ethnic cleansing of Christians.”

Bishop Peter Iornzuul Adoboh of Katsina Ala Diocese (Benue State) and Bishop Matthew Ishaya Audu of Lafia Diocese (Nassarawa State) believe that there is a “clear agenda of Islamizing the Nigerian Middle Belt,” a plan that is making use of the Fulani Herdsmen.

“Their aim is to strike at the Christians,” explains Bishop Audu, “and the government is doing nothing to stop them, because President Buhari himself is a member of the Fulani tribe.”

Adding to the suspicions of complicity on the part of the government is not merely the inactivity of the federal police but also the fact that these Fulani Herdsmen are being armed with ever more sophisticated weaponry.

“At one time these pastoralists were armed only with sticks,” Bishop Avenya explains. “But now they are armed with AK-47’s—expensive weapons that they could not possibly afford. So who is supplying them?”

“Besides, in these areas there are checkpoints every mile-and-a-half. Is it possible that armed men and their flocks of cattle could have somehow become invisible?”

On May 22, 2018, all the dioceses of Nigeria took part in a protest march, calling on the government to protect the Christians.

Bishop Avenya insists: “Our faithful are being murdered or forced to live as refugees as a result of the violence, and the West continues to view the matter of the Fulani as merely an internal problem.”

“Don’t do as you did in Rwanda; don’t wait for the genocide to happen before intervening!”

Posted by EC Gefroh Posted 11:28 AM No comments: