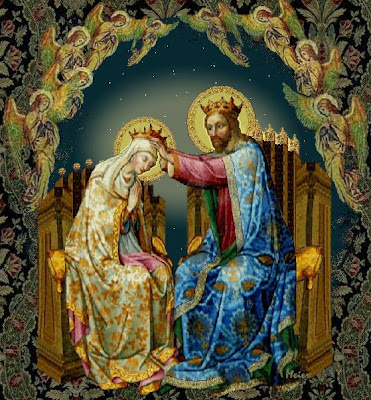 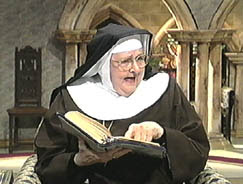 Thanks to Raymond Arroyo for the reminder!

A happy anniversary to Mother Angelica who today is celebrating her 67th year in religious life! It's also the 30th Anniversary of her founding EWTN. Happy feast day Mother.

Please keep Mother Angelica and EWTN in your prayers!
Posted by EC Gefroh Posted 11:57 AM 2 comments:

On Monday, August 8, 2011, Rev. Bohdan Borowec from Winnipeg was acquitted of all charges of kidnapping and sex assault.​

Father Borowec has been detained in Hawaii for six months pending trial. The support and prayers from around the world have greatly assisted him during this difficult time. ​

Read entire article here. Be sure to read "What Really Happened"

The news media did not do their research before reporting. Please pray for Father Bohdan Borowec! Poor Father!

The Borowec Innocence Project
Posted by EC Gefroh Posted 9:52 AM No comments: 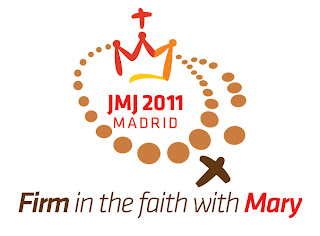 The persecution of Christians is being highlighted by an exhibition which has been organized as part of World Youth Day (WYD) 2011’s cultural program.
The photographic and multimedia exhibition, “Persecuted Christians Today,” takes place in the Royal Church of Saint Jerome in Madrid from the 15th - 21st August, but a special preview was held on Friday, August 12th.
The exhibition has been organized by the international Catholic charity Aid to the Church in Need (ACN).
Javier Fariñas, Head of Communications for ACN-Spain, said, “Many people are surprised to find that freely living one’s faith is still an offence in many countries.”
“We are challenged by the incredible testimony of people who continue living in their country, in their home, despite hostility, violence, discrimination, ridicule or mockery – despite everything they have to endure – because of their Christian faith.”
“What would I do if I lived under the same conditions as them?”
The ACN exhibition tells the story of 15 martyrs from the last 50 years and describes three examples of persecution which have attracted attention in the wider media.
The featured anti-Christian attacks took place in Gojra in Pakistan, in India’s Orissa State and in Tibhirine in Algeria.
The exhibition also features short audio-visual presentations on Nigeria, China, Sudan, Cuba and Iraq.
Visitors are also encouraged to pray for persecuted Christians.
ACN’s Amparo Llobet, who organized the exhibition, said, “Prayer is one of our pillars, we want to transmit to the young people the necessity of interceding for the rest of the Church.”
She added, “What we want is to enter into dialogue with the young people so that they know us and that they know what Aid to the Church in Need is and the various ways they can help the Church throughout the world.”
“We want to sensitize them, to awake their conscience and help them engage with the issues of religious liberty and the persecution of the Church.”
On the 16th and 17th of August, there will be special events with individuals talking about their personal experience of the situation of Christians in Iraq, Cuba and Sudan.
Among those speaking will be 37-year-old Fr. Jorge Naranjo from Madrid, who has worked in Port Sudan, Khartoum and Omdurman in Sudan.
Fr. Naranjo said, “To be Christian is to have disadvantages – it is difficult to get work, to obtain a grant… It is practically impossible to obtain a license to build a Church, even if the Christians are numerous in the region.”
But, the priest said that persecution can lead Christians “to discover that the faith is a true treasure which gives all its direction to the existence and which the largest joy is to be able to divide it…”
“That which perseveres in the faith in spite of the difficulties looks further into it and builds its identity with a more solid base.”
The exhibition “Persecuted Christians Today” is being held at the Church of Saint Jerome (San Jerónimo el Real, Calle Moreto, 4, 28014 Madrid) from the 15th to the 21st of August. It will be open from 10am to 9pm.

Editor’s Notes:
Directly under the Holy Father, Aid to the Church in Need supports the faithful wherever they are persecuted, oppressed or in pastoral need.  ACN is a Catholic charity - helping to bring Christ to the world through prayer, information and action.
Founded in 1947 by Father Werenfried van Straaten, whom Pope John Paul II named “An Outstanding Apostle of Charity,” the organization is now at work in over 145 countries throughout the world.
The charity undertakes thousands of projects every year including providing transport for clergy and lay Church workers, construction of church buildings, funding for priests and nuns and help to train seminarians. Since the initiative’s launch in 1979, 43 million Aid to the Church in Need Child’s Bibles have been distributed worldwide.
For more information contact Michael Varenne at michael@churchinneed.org or call 718-609-0939 or fax718-609-0938. Aid to the Church in Need, 725 Leonard Street, PO Box 220384, Brooklyn, NY 11222-0384. www.churchinneed.org
Posted by EC Gefroh Posted 9:20 AM No comments:

The Assumption of the Blessed Virgin Mary 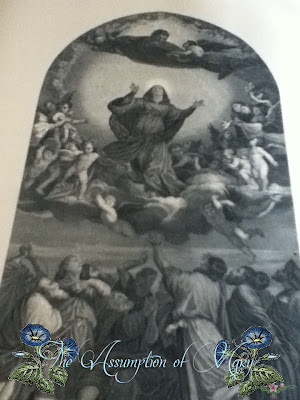 "...It follows that our devotion to His Holy Mother must be a continuation of His devotion to her. We must be filled with the sentiments of respect, submission and affection which He entertained for her on earth and still entertains in heaven. Mary always held and will hold forever the first place in the Sacred Heart of her Divine Son; she always was and will never cease to be the first object of His love after the Eternal Father; and so He wishes tha, next to God, she should be the principal object of our devotion. Fort his reason, after the veneration we owe to the Divine Majesty of God, we cannot render a greater service to Jesus Christ or do anything more ;leasing to Him than to serve and honor His most worthy Mother."

- The Admirable Heart of Mary by St. John Eudes
Posted by EC Gefroh Posted 8:57 AM No comments: 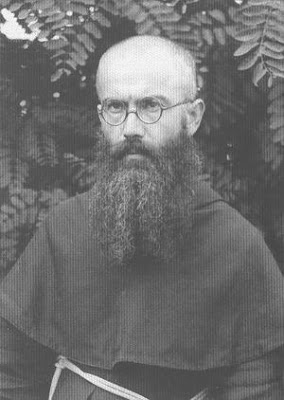 St. Maximilian Kolbe took Francis Gajowniczek's place so that Francis could live instead. 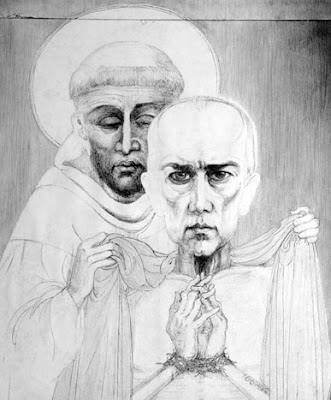 Drawing of St. Francis of Assisi with St. Maximilian Kolbe