Knights of the Holy Eucharist 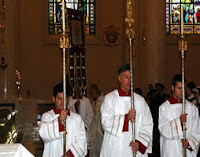 The other night the Knights of the Holy Eucharist were guests on EWTN's Life on the Rock. If you have a chance watch the encore with your sons.

Daily Resolution and St. Alphonsus Liguori's Stations of the Cross

I will receive the sacrament of reconciliation today and also invite someone else to receive it.

Way of the Cross

Posted by EC Gefroh Posted 11:06 AM No comments:

A leading Latin Rite Bishop in Ukraine has reported that relations with the Russian Orthodox are becoming increasingly warm.

Speaking to Catholic charity Aid to the Church in Need (ACN) during a visit to the charity’s international headquarters in Königstein, Germany, Bishop Marian Buczek of the Latin-Rite Diocese of Kharkiv-Zaporizhzhya, Ukraine gave his positive assessment of ecumenical relations in the east of the country. He spoke of the appointment of Patriarch Kirill as good news for ecumenism – despite the hard-line stance the patriarch has publicly taken since his election.

The bishop stressed how the diocese has had excellent relationships with Russian Orthodox in Ukraine – when he first came to Kharkiv-Zaporizhzhya, which shares a border with Russia, one of his first moves was to establish contacts with the local Orthodox Metropolitan.

In his diocese the Latin Rite Church is a minority – the majority of Christians belong to the Russian Orthodox Church (Moscow Patriarchate) and there are many mixed marriages between members of the two Churches. Bishop Buczek said, “For this reason we want relationships between the hierarchies to be good, but there is also a sense of unity which comes through mixed Catholic and Orthodox families.”

Catechesis classes for Catholic and Orthodox couples who are intending to marry are put on to aid mutual understanding between the spouses of the Catholic partner’s faith. While initially the Orthodox partner may be initially apprehensive, “after the course the Orthodox one says thank you to the priest or nun – as it helps them not only to learn about Roman Catholicism, but Christian faith in general.”

The bishop is also keen to arrange a meeting between Russian Orthodox and Roman Catholic youth. He says this would help them to understand each other better, get to know each other, and help them give common testimony of the Christian faith to those who do not go to Church.

Bishop Buczek paid tribute to ACN for the help it had given the Diocese of Kharkiv-Zaporizhzhya, which was erected only seven years ago and covers much of eastern Ukraine. He said, “Since 1991 ACN has supported the Latin Rite Church in Ukraine by building new churches and repairing those churches in need of restoration.”

The bishop underlined how the aid is particularly important in eastern Ukraine, which suffered under Communism thirty years longer than western Ukraine. Speaking of the Communist era, Bishop Buczek said, “It was a spiritual desert – by and large there were no priests here for 70 years.”

There are 20 million people living in the bishop’s diocese, of which 50,000 are Latin Rite Catholics.

Posted by EC Gefroh Posted 10:12 AM No comments:

New Blog for the Spiritual Moms Apostolate in Hawaii 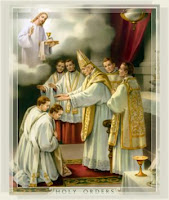 In order to get the word out on the Spiritual Moms Apostolate in the Diocese of Honolulu, Easter and I have started a new blog. Be sure to check back daily for prayers, resources, updates and messages regarding this Apostolate.

If you are a Catholic woman in this diocese and feel called to this apostolate, please contact one of us and we will gladly sign you up.

Right now, there are a few seminarians and priests waiting spiritual adoption.

Posted by EC Gefroh Posted 9:36 AM No comments:

While at our weekly Holy Hour of Adoration I read the following:

O, do not be afraid of exaggerating the divine law of modesty which is the reflection of purity in the social practice of virtue! Make sure that in your homes the sparkling beauty of Christian modesty will always shine from the brow of your daughters. By your care and for My glory make that virtue the glorious endowment of their youth! ... With anger repel far from the family threshold the perverse world...In this struggle never forget that I, I alone, am the only Master in your home! ...A day will come when it will be My turn to judge, and then the laws of this world will give way to My eternal Law...Mothers and wives, remember that I am the only Master, the only Lawmaker in the Church as in the drawing-room, in the private life as in public life, in life as in death...

I will increase my faith in Christ by taking a risk for him in some aspect of my spiritual or apostolic life.
Regnum Christi Daily Meditation

The Forgotten Virtue - Modesty in Dress

“The problem of fashion consists in the harmonious reconciliation of a person’s exterior ornamentation with the interior of a quiet and modest spirit.” Pope Pius XII

The Forgotten Virtue: Modesty in Dress

This is a very good article on modesty and I hope you take the time to read it and pass it along to others.

I have posted on several occasions on the need to dress modestly. This applies to both men and women; boys and girls.

I would also add that we should always dress properly for Mass.

Even though a loose T-shirt is considered "modest", it can be a cause for distraction to others. For example, last Saturday evening we sat behind a very nice Catholic family. The teenage boy was respectful and quiet. However, his T-shirt was very distracting. It was a humorous T-shirt which would have gotten a big laugh out of my family and me in any other setting.

When our son was younger he did not like the fact that we made him dress up for Mass. Here in Hawaii that means an Aloha shirt, dress pants and dress shoes. He thought everyone (translation: his peers) would stare at him. Now at 18 years of age, he dresses properly for Mass on his own without his parents having to remind him of what is and what is not appropriate for Mass.

H/T to Sue of Half the Kingdom

Q & A on Scrupulosity

A very helpful blog for Catholics is Catholic Spiritual Direction.

Q: Father John, I seem to be struggling with scrupulosity. However, when I read St. Teresa of Avila and St. John of the Cross, they exhort that any small sin or attachment can keep us from union with God. How do I know if I am scrupulous or just sensitive to sin? How do I avoid taking sin too lightly? If I am scrupulous, how do I overcome it?

For love of Jesus, I will renew, refresh and invigorate the act of faith with which I begin every day in my morning offering.
Regnum Christi Daily Meditation

I will speak about the joy of receiving the sacrament of reconciliation with someone I meet today, planting in that person’s heart the seed of the desire to receive this sacrament.
Regnum Christi Daily Meditation 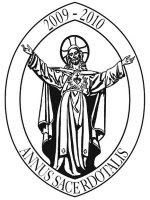 Please check out this new blog created in answering the call for spiritual motherhood.

I composed this Litany of Saint John Mary Vianney for the Novena that begins today and for the Triduum that will be held at Holy Family Cathedral in Tulsa on August 2, 3, and 4 at 6:30 p.m. It will also be included in the prayerbook for the Spiritual Mothers of Priests that is now in preparation.

It is not necessary to pray the entire litany every day. I propose a method of alternating the sections of the litany. One must take care not to "rattle off" the invocations. Allow each invocation to descend gently into the heart, bearing the particular grace it implores.

V. Pray for us, Saint John Mary Vianney,
R. That we may be made worthy of the promises of Christ.

Let us pray.
Almighty and merciful God,
who made Saint John Mary Vianney
wondrous in his pastoral labour;
grant, we implore, that by his example and intercession,
we may win our brothers and sisters for you in the charity of Christ,
and with them be able to attain glory everlasting.
Through our Lord Jesus Christ, your Son,
who lives and reigns with you in the unity of the Holy Spirit,
God, forever and ever.
R. Amen.

Posted by EC Gefroh Posted 9:42 AM No comments:

Feast of Sts. Anne and Joachim 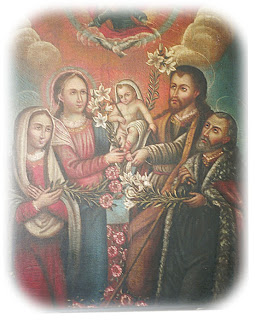 Cuzco Art, 18th Century
Parents of Mary, pray for all parents that they may provide the loving home and faithful teaching that you provided your daughter. Amen
Prayer Source