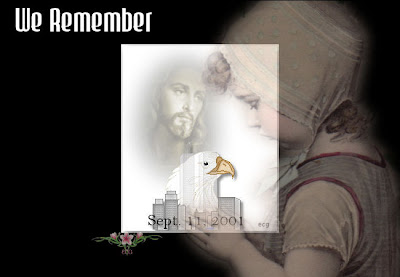 It has been ten years since our beloved United States of America was viciously attacked by cowardly terrorists.  I remember it was early for us here in Hawaii...maybe 7am or so.  I received a call from my mom who sounded very frantic.  She kept mentioning the towers and what she said just didn't register in mind.  Towers...falling down...attack... How could the Twin Towers have been taken down?  They were the iconic buildings of NYC.  When I finally comprehended what had happen, I was in shock.  I then woke up my husband and son.  They too couldn't believe the enormity of the tragedy.

Personally, my family was not really touched by what happened that day.  It was later that we realized there could have been a tragedy in our family too.  My brother-in- law worked in one of the towers.  By Divine Providence, he was home that day with a torn ligament.  I have mentioned before how many of his co-workers died on September 11th.  Remember "Tom"?  His friend and co-worker who many of you prayed for when he battled a valiant fight against cancer.  He relayed the story of being there that day.  People were crowding into an elevator in hopes of escaping with their lives.  Tom was able to squeeze into an already crowded elevator.  A heavy-set man, just could not fit in.  They had to leave that man behind.  The man died.

We as a nation have changed forever and many in bad ways. But today, we remember the victims and honor the heroes.

The scenes of the area surrounding the World Trade Center was one of chaos and looked much like a war zone the morning of the attack. Who can forget the look of anguish on the faces of the people there.

One of the first bodies to be recovered was that of Father Mychal Judge, a Franciscan priest and chaplain of the New York Fire Department. Most everyone would recognize the picture I am referring to.  As you can see from the above photo, Father Judge was proud to be a part of NYFD.  He gave his life for them.

The following are photos are of Ground Zero and the famous cross found at Ground Zero.  They were taken in 2008 after a day trip to New York City. 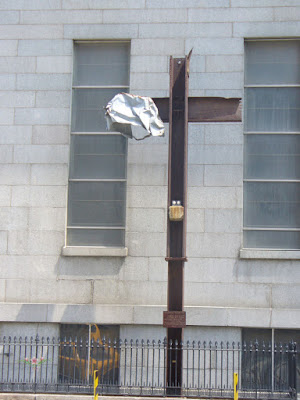 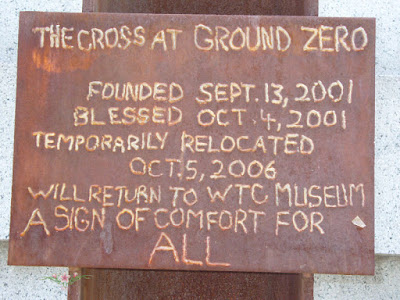 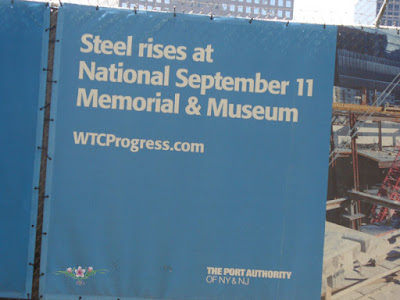 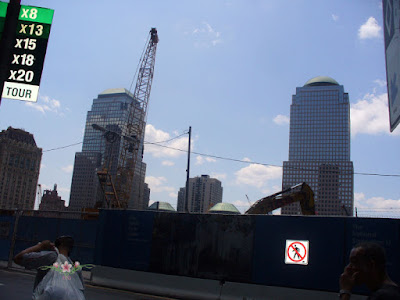 For the past few years I have had the privilege of participating in Project 2,996 as an online way of honoring the September 11th victims.

Mark H. Rosen who worked at Sandler O'Neill and Partners

Samuel (Sandy) Ayala) who worked at Windows of the World

I am very sorry I never knew these men personally. If I had then my tributes would have been more worthy of them and their lives.

It was touching to see that a couple of the family members and a friend read the tributes. They not only read them, they took the time to leave comments.

Hi, Robert Scandole was my Uncle. I think you did a wonderful thing writing about him here. He will be missed by all who knew him but his memory will live on forever, thank you for writing such beautiful things about him.

Eternal rest grant them O Lord
and may Your Perpetual light
shine upon them.
May the souls of the faithfully departed
through the mercy of God
rest in peace.

Esclavo de los esclavos - The Slave of the Slaves 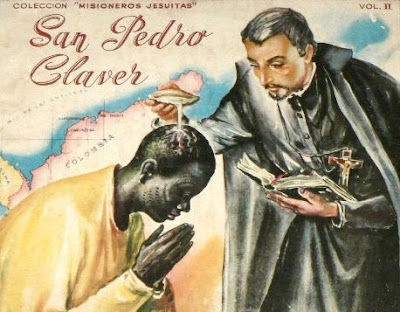 The following is from an inscription on a mausoleum of the American Saints at St. Joseph Cemetery south of Columbus, Ohio.


"Braving the horrible odors, the sickly atmosphere, and overwhelming anxiety within the slave ships of South America, Claver not only gave the slaves spiritual comfort and guidance but cured their sores, bandaged their wounds, and cared for the sick." 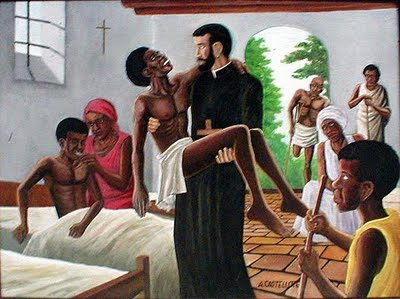 Peter Claver was born in 1580 in Verdu, Catalonia Spain.  St. Alphonsus Rodriguez was instrumental in his decision to travel to Cartagena as a missionary.  Cartagena, Colombia was "the most fearsome slave market in South America.  There he met Father Alonso de Sandoval, a Jesuit priest who had devoted his life to the salves.  Peter was ordained a priest in 1616."  Thus began his thirty-three heroic career. 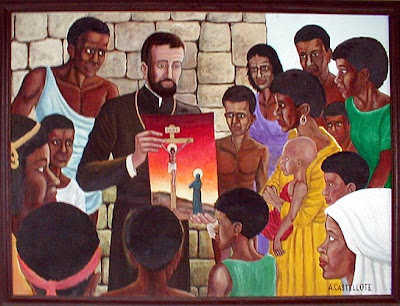 "...the slave ships... packed with men and women wrenched from their homes in Africa, chained together in bundles of six, wedged under decks where neither sun nor moon could penetrate, in a stench into which no white officer could put his head for fear of fainting.  The description comes from Father Sandoval, who had already spent forty years caring for the slaves.  It is estimated that ten thousand slaves were shipped from Africa to the seaport town of Cartagena.  Many of the slaves died during the long voyage; those who survived were starving, stinking, covered with sores, and more than half crazed with fear." 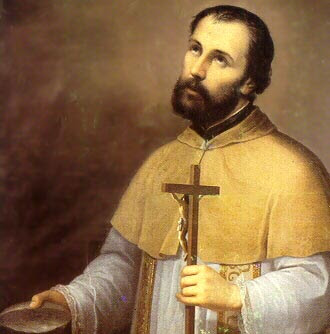 "...Peter's face would beam as he moved gently among them--and they never knew how sick he became at the task, how he almost fainted daily at the horrors of his ministry.  But he did it for thirty-three years.  To conceal his physical disgust, he would kiss the running sores.  Peter Claver baptized the dying, then washed and fed the sick.  As he took them to the yards where they were penned like cattle, the slaves crowded around him with pathetic demonstrations of affection for the one white man in  Cartagena who was kind to them." 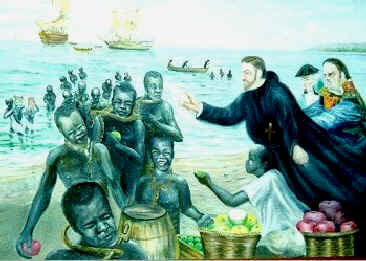 
"The poor outcasts feel on their knees and through a mist of tears worshiped the God who made the slave-trader in his image, the God of the white men who had torn them from their homes; the God of the brutes who had treated them as brutes. God was all this, but he was also the God of Father Claver."

On September 8, 1654, our Lady's birthday, Peter Claver died in Cartagena. In 1888 he was canonized and named the official patron of those who bring the Gospel to their back brothers and sisters.

Source: The Who's Who of Heaven: Saints for all Seasons by Msgr. John P. Kleinz
Posted by EC Gefroh Posted 2:01 PM 7 comments:

Highly recommended by my mom.
Posted by EC Gefroh Posted 3:35 PM No comments:

The Nativity of the Blessed Virgin Mary 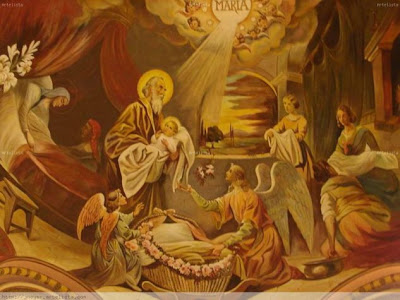 The following apocryphal text is from The Birth of Mary, Glorious Mother of Jesus Christ, according to the Book of James, or Protevangelium. Source: The Book of Mary by Henri Daniel-Rops, Hawthorne Books, Inc., NY.


"...And he remembered the patriarch Abraham, how in the last days God gave him a son, even Isaac. And Ioachim (Joachim) was sore grieved, and showed not himself to his wife, but betook himself into the wilderness, and pitched his tent there, and fasted forty days and forty nights..."

"...And behold, an angel of the Lord appeared, saying unto her: Anna, Anna, the Lord hath hearkened unto thy prayer and thou shalt conceive and bear, and thy seed shall be spoken of in the whole world. And, Anna said: As the Lord my God liveth, if I bring forth either male or female, I will bring it for a gift unto the Lord my God, and it shall be ministering unto him all the days of its life...."

"...an angel of the Lord came down unto him sayings: Ioacim, Ioacim, the Lord God hath hearkened unto thy prayer. Get thee down hence, for behold thy wife Anna shall conceive..."

O Ever Sweet and Blessed Mother, on the day we remember and honor your birth, please bestow on us, your flawed children, a great love and devotion to you, as the Mother of Our Blessed Lord, Jesus Christ and our mother.

May we ever follow your loving example to be sweet, kind, gentle, loving and silent, especially when suffering comes our way.

Beautiful video! Makes one proud to be Catholic! Mahalo to the Anchoress
Posted by EC Gefroh Posted 3:43 PM No comments:

I hope you had a chance to watch that heartwarming Oprah show yesterday on Mattie and his "heartsongs".
Posted by EC Gefroh Posted 9:47 AM No comments:

Labels: EWTN: The World Over

This Sunday will mark the 10th anniversary of the worst unprovoked attack on America soil. So many innocent people lost their lives. So many families were left shattered by the sudden and tragic loss of a loved one.

It is very easy to do. First, visit Project 2996. Choose a name of someone currently not having a tribute and do a little research. Then if you are a blogger, you can write a small post about the person you selected.

On September 11th, I will repost the links of the two individuals I have written about.

Life on the Rock - Rosary Rally -Legion of Mary