Fatima Messages - from the Angel of Peace 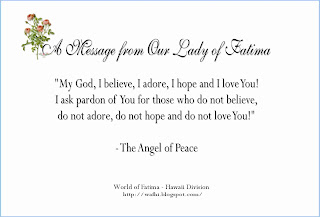 If you really want Catholics in your diocese to know what Pope Francis says and does during his visit to the United State and Cuba, we invite you to link to EWTN’s website for live streaming of the entire visit, www.ewtn.com/america. From the Pope’s arrival in Havana on Sept. 19 through his departure from Philadelphia Sept. 27, the Network will be live on-the-ground with the most experienced news teams and the top experts in Catholicism. EWTN will not only cover, but explain – in English, Spanish, German, Portuguese, and Italian -- everything the Pope says on his journey across North America.

“Covering the Pope is what we do year round on a daily basis,” said EWTN President & COO Doug Keck. “No one else possesses the depth of understanding and the expert commentators like EWTN.”
EWTN will not only cover the Pope’s trip on EWTN television, but on EWTN radio, via its social media sites and news services, and in multiple languages. Viewers can also see it live streamed and get details of EWTN's coverage at www.ewtn.com/america or on their mobile phone with the EWTN app (www.ewtnapps.com).

On the English side, EWTN News Director Raymond Arroyo, who has anchored more papal events than anyone in the industry, will host our live coverage from New York, Washington, D.C., and Philadelphia. The “EWTN News Nightly” (ENN) team, led by ENN Anchor Brian Patrick, will also be on-the-ground providing news and reports during the Pope’s visit to all three U.S. cities, while ENN Producer Susanna Pinto will offer English-language reports from Cuba. In addition, Spanish-language coverage in Cuba will be anchored by EWTN’s Alejandro Bermudez, executive director of the ACI Group, and host of several Spanish-language programs on EWTN Spanish-language television and radio networks.

EWTN President & COO Doug Keck and “Women of Grace” Host Johnnette Benkovic will host coverage of the “World Meeting of Families” (WMOF) in Philadelphia, which airs Sept. 22-25, just prior to the Pope’s arrival in Philadelphia. Keck will also provide regular updates on the Pope’s travels around the U.S. In cases where EWTN’s papal coverage coincides with keynote speeches and Masses at the WMOF, EWTN will live stream the events at www.ewtn.com/wmof2015. 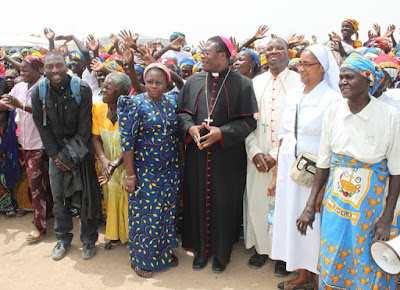 Last July, Boko Haram suicide attacks killed more than 30 people and injured hundreds in the town of Maroua, Cameroon. In the wake of that violence, the open-air celebrations of Mass in the Diocese of Maroua-Mokolo are surrounded by a human chain protecting congregations as large as 3,000.

Despite the fear of terrorism, Bishop Bruno Ateba told international Catholic charity Aid to the Church in Need (ACN), the people have retained their sense of joy.

“We like to sing and dance during Holy Mass, for the Lord is our refuge,” the prelate said, adding, “We feel as though it is Good Friday. Yet we are not giving up hope.”

Boko Haram is stalking Cameroon, especially in the northern region close to Nigeria. On Sept. 3, 2015, two women blew themselves up in a crowded market place, causing a bloodbath.

Bishop Ateba reported that there are more than a 100,000 people in the area who have been driven from their homes. Half of them—mostly refugees from Nigeria—are stranded in a camp some 25 miles from Maroua.

Some 50,000 Cameroonians have been driven from their home; most have sought refuge with relatives or found shelter in public building.

The bishop has withdrawn foreign missionaries from the frontier region. “Life is too dangerous there for people with white skin,” he said, adding that tourism, an important source of income for the region, has also taken a hit.

“We‘ve been brought to a standstill,” he said, calling on especially on the West to “help us to achieve peace. Without peace we can do nothing.”

“The international community has all the resources to put an end to the terrorism of Boko Haram.”

To ultimately stop Boko Haram, said the bishop, dialogue between Christians and Muslims is essential. The Catholic Church has a good reputation in Cameroon, where 70 percent of its population of 20 million people are Christians; Muslims account for about a fifth of the population.

The bishop said that Muslims make regular use of Catholic health centers and also send their children to Catholic schools.

In 2014, Aid to the Church in Need (ACN) spent more than $1M in support of the pastoral mission of the Church in Cameroon, including the training of seminarians in the Diocese of Maroua-Makolo.

A big project underway is the construction of a cathedral in Maroua. ACN also recently helped build a multi-purpose hall close to the refugee camp outside Maroua, where Catholic refugees can come for prayer and Mass.

TO THE MOTHER OF SORROWS

Most holy Virgin and Mother,
whose soul was pierced by a sword of sorrow
in the Passion of thy divine Son,
and who in His glorious Resurrection
was filled with never-ending joy at His triumph;
obtain for us who call upon thee,
so to be partakers in the adversities of Holy Church
and the sorrows of the Sovereign Pontiff,
as to be found worthy to rejoice
with them in the consolations
for which we pray,
in the charity and peace of the same Christ our Lord.
Amen.

3.  The Loss of the Child Jesus in the Temple.

4.  The Meeting of Mary and Jesus at the Way to Calvary.

6.  The Descent from the Cross.

Posted by EC Gefroh Posted 10:07 AM No comments: