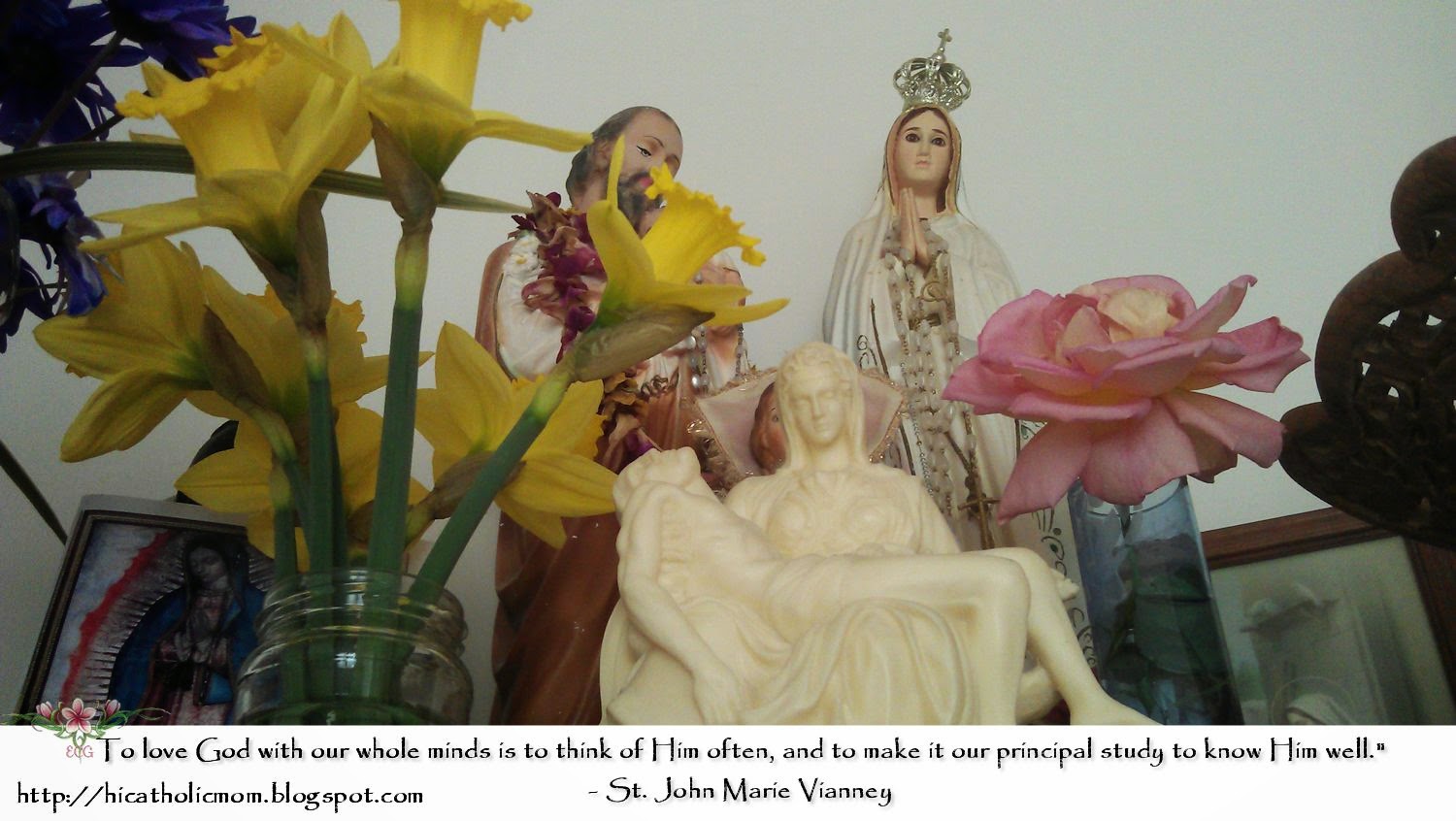 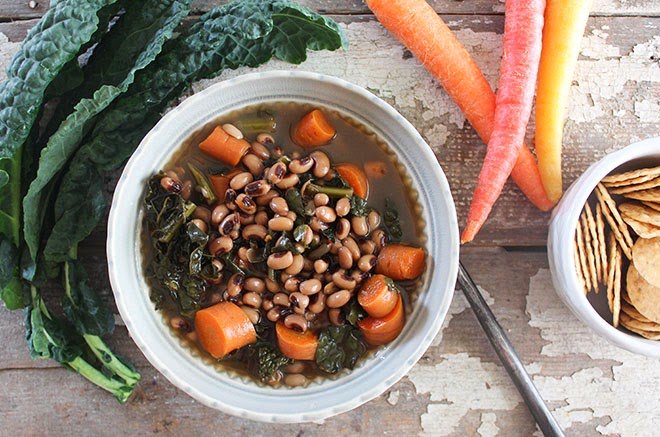 Picture source and recipe for this soup can be found HERE

After the heavy rains, the garden was alive and green!  The kale was ready for picking and I had black-eyed peas in the pantry.  I heard a lot about Hoppin' John but I did want to incorporate kale with the beans.  A little search yielded a recipe that was not only very delicious but very nutritious as well.  NOTE:  I did make the following adjustment to the recipe...extra virgin olive oil instead of coconut oil.

Interview with Rita A. Simmonds on the Sacrament of Marriage

I was so moved by the cancer patient's video in the previous post that I did had to do a little more searching. The name of his wife seemed very familiar to me. It dawned on me that she is a contributor to Magnificat magazine. In my search I came across an interview by another Magnificat contributor, Heather King. She interviewed her friend Rita in such an appealing way and exactly like it was, two friends sharing.  Even though the interview is a couple of years old, it is still much worthy of a good read.  POET RITA A. SIMMONDS ON THE SACRAMENT OF MARRIAGE.
Posted by EC Gefroh Posted 10:01 AM No comments:

A Journey through Lent with a Cancer Patient

You will hear some pretty powerful and inspirational words from this dear man. From A Stage Four Cancer Patient: "Never Have I Felt So Accompanied in My Life". via: Association of Catholic Women Bloggers.
Posted by EC Gefroh Posted 9:19 AM 1 comment:

Catholic charity Aid to the Church in Need (ACN) has announced that it will open new offices in Mexico and South Korea later this year.

ACN’s presence in both countries, including its first in Asia, means that the charity will have 19 national offices dedicated to encouraging prayer for suffering Christians, raising awareness of their plight and collecting donations in support of the charity’s mostly pastoral projects around the world.

The charity is also strengthening its connections with benefactors in Malta by staging a conference there on religious freedom.

Commenting on the new offices planned for Mexico and South Korea, Baron Johannes Heereman, the Executive President of ACN, stated, “Further countries can contribute to the expansion of ACN’s commitment to its service to the evangelizing, needy and persecuted Church.”

“On the initiative and with the assistance of our office in Madrid, we have decided to make a start in Mexico.”

“And, with the agreement of the local Bishops’ Conference, we have also decided on South Korea because it is an economically developed country in which the Catholic Church is growing, and because to date we have absolutely no representation in Asia.”

The preparations for the new offices are in full swing and both are scheduled to open in the second half of 2014.

Baron Heereman said, “Our Spanish colleagues advocated the opening of an office in Mexico because our charity receives many communications and requests from that country.”

The Executive President added that the preparations are now reaching their conclusion following the agreement of the Archbishops of Mexico and Guadalajara in the country’s Jalisco state.

He pointed out that legal questions are still being clarified and that staff recruitment is underway.

ACN’s existing national offices are in different countries across Europe as well as in Australia, Canada, the U.S., Brazil and Chile.

Building on the close contacts it has built up with benefactors there, the UK office, based in Sutton, is supporting the charity’s development in Malta.

An ACN congress on international religious freedom will be held in Malta on May 12th, 2014, in the presence of the President of ACN, Cardinal Mauro Piacenza.

The conference will bring together benefactors and supporters from Malta and from around the world to hear expert speakers on the challenges of persecution and oppression of Christians in the Middle East and parts of Africa.

ACN, which was founded by the late Dutch Norbertine priest Father Werenfied van Straaten, has supported the Church in need for more than 65 years.

The charity receives no public or Church funds for its work and is dependent on the generosity of donors. The work of ACN is supported by 600,000 benefactors around the world.

Last year the charity supported more than 5,000 projects in 130 countries around the world.

Patriarch Gregorios III, head of the Melkite Greek Catholic Church, broke the news to a team from Aid to the Church in Need (ACN), who had just arrived in Lebanon to visit projects supporting refugees from Syria.

The Damascus-based Patriarch told members of the Catholic charity for persecuted and other suffering Christians that the nuns had not been harmed during their ordeal and that their release was “a sign of hope in this time of crisis.”

Gregorios III said, “I think they were not treated too badly as it is not in the interest of the kidnappers to do this.”

He said that the freedom of the nuns had been secured following the intervention of Greek Orthodox Patriarch John X.

Patriarch Gregorios added that the release had apparently been mediated by the secret services of Qatar and Lebanon.

Describing the plight of the nuns, who were seized from a monastery in the Syrian town of Maaloula, Patriarch Gregorios said yesterday (Sunday): “[The nuns] had to travel [80Km] from Yabroud [where they were being held] to the border of Lebanon and I don’t know where they will go this evening,” although it is expected they will now settle in Lebanon.

According to media reports, the release of the nuns had been agreed as part of a deal in which the government would free scores of women prisoners.

The Sisters were seized in December from the Greek Orthodox monastery of St. Thecla in the predominantly Christian town of Maaloula, about 40 miles north of Damascus.

Later that month (December), the nuns appeared in a video obtained by Al-Jazeera television, saying they were in good health, but the circumstances in which the video was made were unclear.

Soon after their capture, they were reportedly moved 15 miles north to the rebel-held town of Yabroud.

The British-based Syrian Observatory for Human Rights monitoring group identified the rebels who took the nuns as militants from the Nusra Front, Al-Qaeda’s affiliate in Syria.

In the three days that they held the town, 12 people were killed, including three men who refused to renounce their Christian faith.

The Patriarch described speaking to the nuns’ Mother Superior shortly after the town was taken and being assured by her that all the Sisters were unharmed.

Weeks later, the Islamists struck again and took the nuns.

In the meantime, children who fled Maaloula in September are being supported and educated by the Church in Damascus.

ACN has provided ongoing emergency help for the victims of the violence and unrest in Syria, including food, shelter and medicine.

Up to nine million people are either internally displaced within Syria or living as refugees abroad.

Of Syria’s pre-war Christian population of 1.75 million, it is now understood that 500,000 have fled their homes.