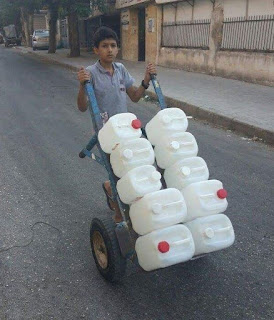 “We Christians are determined to stay on in Syria and continue to give our witness.” Grim-faced and speaking with determination, this is how Chaldean Archbishop Antoine Audo of Aleppo, Syria, addressed the media in Rome earlier this week.

The archbishop commented on the mass exodus of Syrians, particularly in response to the open welcome shown by some European countries. He said, “All those who were able to leave have already left, while the others are still trying to leave the country.”

“Above all our young men, who fear being called up for military service and don’t want to take part in a senseless war that has brought nothing but destruction.”

Most first head for Turkey, where they then try to board vessels for Greece or Italy.

“So many of them have met their deaths at sea,” the archbishop added, speaking at a press conference sponsored by international Catholic charity Aid to the Church in Need (ACN) and Rome’s Foreign Press Association.

The mass emigration has not spared the Christian community in Aleppo, a place where the Christian minority has long formed a sizeable and visible presence.

“There is a real fear that our community might disappear altogether,” the archbishop said.

After going on five years of war the situation in Aleppo has become desperate. “The rich have gone, the middle classes have become poor and the poor have become destitute.”

“More than 80 percent of the population is now unemployed,” said the prelate. Moreover, for over two months now, the city has been without water and electricity.

“One of our churches has a well in its grounds, and we try to distribute water to as many people as possible. On every street you can see children and youngsters carrying empty bottles, searching for water.”

Meanwhile, bombs continue to fall every day. Said the archbishop: “One part of the city is controlled by the government, while the rest is in the hands of fundamentalist groups who are constantly attacking the area controlled by the Syrian army—and that’s where the majority of the Christians live.”

“The situation in Aleppo is one of the most critical in Syria, because we are just 25 miles from the border with Turkey, which is continuing to arm and welcome the fundamentalists.”

Archbishop Audo charged that the protracted nature of the Syrian conflict is a reflection of a tangle of international interests. He said: “We have been waiting for years for a political solution, for some glimmer of hope that the war might end.”

“But there seems to be a desire on the part of the international community to see the war continue—just as was the case in Iraq and Libya.”

“It is a determination linked to strategic interests in the Middle East region; as Pope Francis has reminded us more than once, commercial interests linked to the arms trade are in play.”

With picture of a boy transporting water in Aleppo, Syria (© ACN)

The Spiritual Life - The Confidence of a Simple Soul 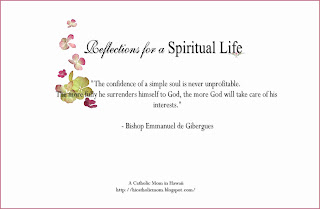 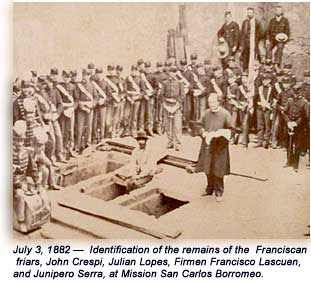 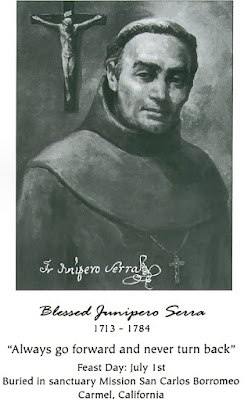 Saint Junipero Serra (1713-1784), the first apostle and colonizer of Alta California was a model evangelizer and is a benchmark for the missionary spirit for spreading and renewing the faith.  The church celebrates his feast on July 1.

When Pope Francis visited the USA in September 2015 he canonized him at the National Shrine of the Immaculate Conception in Washington, DC.

Although some Spaniards were guilty of abusive treatment, Padre Serra had never been guilty of mistreatment.  On the contrary, he defended them from harm.   In 1784 Father Serra died at Mission San Carlos Borromeo, and later he was buried in the sanctuary of its church. When St. John Paul II beatified Junipero Serra on September 25, 1988, he praised the Apostle of California as “an exemplary model of the selfless evangelizer, a shining example of Christian virtue and the missionary spirit.”  These are the traits we are challenged to exhibit.

Saint Junipero Serra witnessed to the holiness of the Church and its concern for all people.  As an extraordinary missionary and an exceptional example of the Church’s apostolic calling to preach and exemplify the Gospel to everyone, he personifies the spirit of the new evangelization that characterizes our times.

November 24 is the feast day of Saint Junipero Serra, Apostle of California.  The son of Antonio and Margarita Ferrer, he was baptized Miguel Jose and took the name Junipero as a Franciscan.

This is part of the documented legacy of Blessed Junipero Serra to the Church in California.

·       He walked an estimated 4,000 miles in California on his missionary journeys with an injured leg.

·       He baptized 98% of the adult converts at Mission San Carlos Borromeo in Carmel.

·       The records of The Early California Population Project indicate that his efforts supporting the 21 missions, the Los Angeles Plaza Church, and the Santa Barbara Presidio resulted in 101,000 baptisms, 28,000 marriages, and 71,000 burials.
Posted by EC Gefroh Posted 10:06 AM No comments:

The Spiritual Life - Jesus the Friend 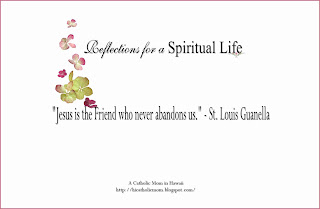 Reflections for a Spiritual Life - Cooperating with the Holy Spirit 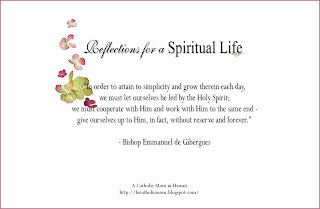