On Honoring Mary, the Blessed Mother of God 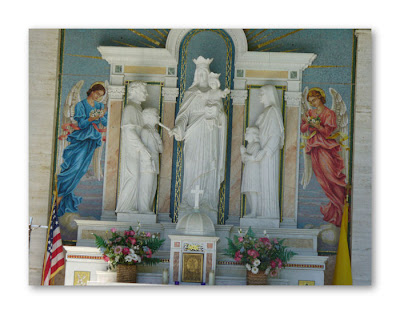 
"We never give more honour to Jesus than when we honour his Mother, and we honour her simply and solely to honour him all the more perfectly. We go to her only as a way leading to the goal we seek - Jesus, her Son."
-Saint Louis Marie de Montfort 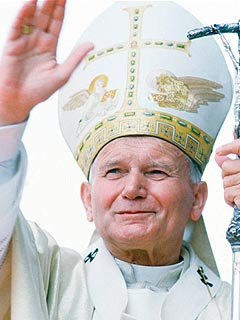 John Paul II was born to lead and to inspire, to bridge the human and the divine. More than one observer characterized him as “man of the century” during his lifetime. And even before his passing to eternity some commentators were assigning to him the encomium “John Paul the Great.”

But John Paul II also drew a considerable share of criticism
and a wide variance of opinion. Then what can we say with certainty, in the absolute, about the 264th successor of St. Peter. Looking beyond doctrine and politics we see a truly extraordinary person.

Above all, he mattered in his period of history. He changed the face of Europe, stopped several wars and protested others, traveled the equivalent of three-and-a-half times to the moon. He has been seen in person by more people than anyone else in history. John Paul II most certainly must be numbered among the titans of his times. This pope was a magnet for humanity.

As a “sign of contradiction” and one who mattered in human and church arenas, he also divided. The wide range of varying opinions might be the most convincing sign of his impact. John Paul II made over 100 trips outside Italy, canonized about 500 saints, beatified about 1400, authored more than a dozen landmark encyclicals and numerous other instructions. The list of his activities seems endless. He exhibited boundless energy for work and for engaging people. All of this made him famous, but it also made him controversial. His was a bruising, polarizing pontificate.

In the final analysis, we can confidently say that John Paul, deeper than his politics and his Polish Catholic cultural formation, was an extraordinary person of sterling character, a genuine mensch. He was a strong, intelligent, caring human being. His integrity and dedication to duty present a standard by which other leaders can be measured.

Above all, John Paul was a selfless human being in a me-first world. Cardinal Roberto Tucci, who planned the pope’s trips and briefed him hundreds of times on trips long and short, observed that never did the pope ask what conveniences or creature comforts to expect. That indifference to himself was noticeable every time he entered the public stage. The very motto of this dedicated apostle of Mary indicated this: “Totus tuus” (I am all yours).

This is the key to his personal magnetism that drew enormous crowds everywhere, even in places where his political or doctrinal stands were unpopular. Deeper than either secular or religious concerns was his personal integrity -- goodness and holiness, the qualities we prize most highly in others. A person may be regarded as liberal or conservative, avant-garde or traditional, but let that person be decent, and that suffices.

John Paul II’s authentic humanity was the source of his appeal. The most important lesson he offered is the coherence of his own life. When he urged Christians, in the words of Jesus, “duc in altum” (set off into the deep), that resonated even with those who sought different shores.

John Paul’s admirers and critics alike can say of him what Shakespeare’s Hamlet said of his father: “He was a man. Take him for all in all, I shall not look upon his like again.”

From Brother John: The ... article was published to mark the fifth anniversary of his death in THE INSIDE PASSAGE, biweekly newspaper of the Diocese of Juneau, Alaska, April 9, 2010, page 7.
Posted by EC Gefroh Posted 9:29 AM No comments: 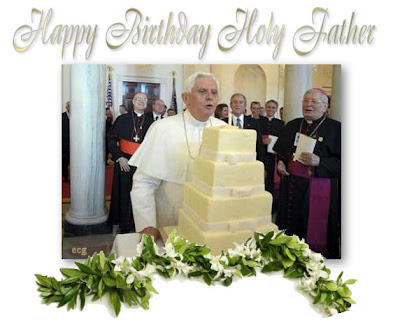 Prayer for the Pope
Lord Jesus Christ,
you willed to build your Church on Peter the Rock
and the Popes who have succeeded him through the ages.
Pour forth your grace on our Holy Father
that he may be a living sign and an indefatigable promoter
of the unity of the Church.

Help him to proclaim your message to all people
and to listen to the message that comes to him
from the consensus of all its members
and from the world that yo made.
Make him serve others after your example
and in accord with his traditional title:
"Servant of the servants of God."
Unite us closely to him
and make us docile to his teachings.

Letter on End of Priestly Year

"The Church Loves You, Admires You and Respects You"

VATICAN CITY, APRIL 15, 2010 (Zenit.org).- Here is the letter sent to all priests by Cardinal Cláudio Hummes, prefect of the Congregation for Clergy, in anticipation of the closing of the priestly year.

The Year for Priests brings great joy to the Church and she thanks the Lord for having inspired the Holy Father to announce it. All the information which is presented here in Rome concerning the numerous initiatives taken by the local Churches throughout the world, in order to put this special year into effect, are proof of how this Year has been so well received and -- we can add -- how it has responded to a true and deep longing of priests and the entire People of God. It was time to give special attention, acknowledgement and commitment to the great, hardworking and irreplaceable presbyterium, and to each individual priest of the Church.

It is true that, albeit proportionately small in number, some priests have committed horrible and most serious crimes of sexual abuse upon minors, deeds that we must condemn and rebuke in an absolute and uncompromising manner. Those individuals must answer for their actions before God and before tribunals, including the civil courts. Nevertheless, we also pray that they might achieve spiritual conversion and receive pardon from God. The Church, for her part, is determined neither to hide nor to minimize such crimes. Above all we are on the side of the victims and want to support their recovery and their offended rights.

On the other hand, it is absolutely unacceptable to use the crimes of the few in order to sully the entire ecclesial body of priests. Those who do so commit a profound injustice. In the course the Year for Priests, the Church seeks to say this to human society. Anyone possessed of common sense and good will knows it to be the truth. ...

Read the rest of the letter here at Zenit
Posted by EC Gefroh Posted 2:39 PM No comments:

"First They Came for the Socialists..."

This is a good reminder to all of us who want to defend against injustices and an the ever growing intolerance of God. Wake up Christians! Defend what is right. We no have the luxury of keeping silent.


First they came for the Socialists, and I did not speak out --
Because I was not a Socialist.

Then they came for the Jews, and I did not speak out --
Because I was not a Jew.

Then they came for me -- and there was no one left to speak for me.

Labels: Fighting Back Against Attacks on the Catholic Church

H/T to Jean at Catholic Fire
Posted by EC Gefroh Posted 9:40 AM No comments:

Have a Mass Offered for Our Holy Father on Friday, His Birthday 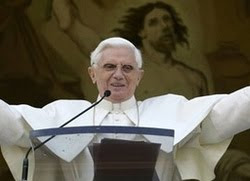 Our Holy Father will celebrate his birthday on April 16th.

Wouldn't it be a good idea to have a Mass offered for him at your local church?  You can then send him a Mass Card letting him know and also wishing him a happy birthday.  That is what my family and I are doing.