EWTN Helps You Put the ‘Holy’ in Holy Week

Irondale, AL – Did you miss your parish’s Lenten mission? Feel like you could have tried a little harder to be a better person this Lent?
Then, tune into EWTN this week as we enter into the holiest week of the year. Below are just a few of the great programs EWTN will air. (Note: Times are subject to change so please check our website for updates and the complete schedule at http://bit.ly/GXO74x. For a complete schedule of programs on the EWTN Radio Network, click here: http://bit.ly/Hn4sQ8.)
Palm Sunday Specials:
Palm Sunday Masses:
Holy Week Specials: Suffering and Death in Our Own Lives
Among the dozens of Holy Week specials, here are three that are especially relevant to those who are suffering and need support:
Holy Week Retreats
Children
Holy Thursday Masses:
Good Friday
Holy Saturday
Easter Sunday
Pope’s Easter Message to the World
Programs may be seen or heard on EWTN television by cable or satellite (www.ewtn.com/channelfinder), streaming audio or video on the Intranet (http://origin.ewtn.com/audiovideo/index.asp), shortwave (http://www.ewtn.com/radio/freq.htm), and EWTN mobile (http://www.ewtn.com/mobi/). You can also listen to many great Holy Week programs on the EWTN Radio Network via our affiliates (http://www.ewtn.com/radio/amfm.htm), or on satellite radio (http://www.sirius.com/ewtn).
EWTN Global Catholic Network, in its 30th year, is available in over 200 million television households in more than 140 countries and territories. With its direct broadcast satellite television and radio services, AM & FM radio networks, worldwide short-wave radio station, Internet website www.ewtn.com, electronic and print news services, and publishing arm, EWTN is the largest religious media network in the world.
Posted by EC Gefroh Posted 1:03 PM 1 comment: 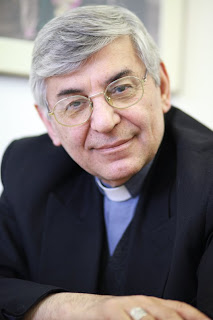 A local bishop in Iran has encouraged Western Christians to value their freedom, but also to put it to good use.
In a meeting with international Catholic pastoral charity Aid to the Church in Need (ACN), the Chaldean Bishop of Tehran, Ramzi Garmou, had a message for Christians in the West, saying, “Be aware of the value of the freedom that you enjoy.”
He then challenged Western Christians to “make good use of their freedom,” asking, “How do you use it in your countries?”
He emphasized that they must not become “the slaves of a culture that seeks to drive God out of people’s hearts,” but rather that they should use their freedom to “propagate respect for human life.”
A culture without God leads to “death” and has “no future,” he said.
Christians in Iran only represent a small minority, yet “their vitality does not depend on their numbers but on the quality of their faith and their living witness.”
In their “day-to-day dialogue” with the Muslims, the Christians in Iran “give authentic witness to the values of the Gospels,” he continued.
The substantial emigration of Christians from Iran for political, economic and religious reasons represents a challenge, but Bishop Garmou emphasized that the Christian community in Iran does not let itself become discouraged.
“Although we are our mothers’ children, in truth we were sent to this country by God.”
He continued by saying that it is often forgotten today that the suffering endured for the Church is the “source of the life of the Church.” He went on to say that such trials lead to the renewal and strengthening of the Church.
Up to 99 percent of the population of the Islamic Republic of Iran is Muslim. Conversions from Islam are forbidden and punishable by death.
Christians represent a minority of some 80,000, three-quarters of whom are Armenian Orthodox.
The 20,000 Catholics living in Iran belong to three different Rites. They are permitted to practice their religion within their congregations at their places of worship, but they are not allowed to profess their faith openly, and missionary activity is forbidden.
With picture of Archbishop Ramzi Garmou of the Chaldean Church in Iran (Tehran) (© ACN).
Editor’s Notes:
Directly under the Holy Father, Aid to the Church in Need supports the faithful wherever they are persecuted, oppressed or in pastoral need.  ACN is a Catholic charity - helping to bring Christ to the world through prayer, information and action.
Founded in 1947 by Father Werenfried van Straaten, whom Pope John Paul II named “An Outstanding Apostle of Charity,” the organization is now at work in over 145 countries throughout the world.
The charity undertakes thousands of projects every year including providing transport for clergy and lay Church workers, construction of church buildings, funding for priests and nuns and help to train seminarians. Since the initiative’s launch in 1979, 43 million Aid to the Church in Need Child’s Bibles have been distributed worldwide.
For more information contact Michael Varenne at michael@churchinneed.org or call 718-609-0939 or fax718-609-0938. Aid to the Church in Need, 725 Leonard Street, PO Box 220384, Brooklyn, NY 11222-0384.  www.churchinneed.org
Posted by EC Gefroh Posted 12:59 PM No comments:

Posted by EC Gefroh Posted 9:21 AM No comments: