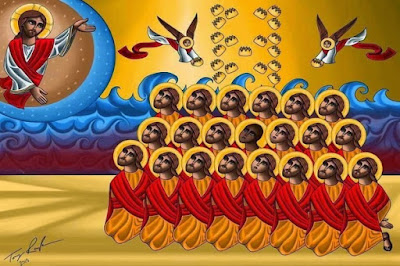 THE SHRINE to the 21 Christian men beheaded by ISIS on a Libyan beach in February 2015, will hold an exhibition on Feb. 15, honoring the men and marking the fifth anniversary of their death.

The exhibition documents the men’s story, from the time of their abduction to the return of their bodies to the village of Al Our, in Egypt’s Minya province, where the shrine is located.

Visitors will be shown the orange jump suits the men wore when they were beheaded, tools with which they were caught, some sand on which their blood was spilled, and the specially made coffins that hold their remains.

In an interview with Aid to the Church in Need, the mother of two brothers, Samuel and Beshoy, 22 and 24-years-old, who were among the 21 martyrs, said: “I’m the mother of martyrs, I’m proud of them. They intercede for me and their father in heaven.”

She said she is praying for ISIS followers, calling on “God to give them the light and open their eyes to the truth and the good.”

Before the release of the ISIS video “that showed the killing of my brothers and their colleagues, our family and the church in our village of Al Our had spent 45 days praying for them, as we knew of their kidnapping,” said Basheer, the brother of Samuel and Beshoy.

He added that “God talked through their cries of ‘oh Jesus,’” as recorded in the video.

“Our martyrs were praying before they died; it was obvious that they were calling on Jesus. That gave us comfort and made us proud.”

“Those 21 were fortunate to be martyrs for Christ and our community is honored” to have custody of their bodies, Basheer said.

He continued: “My father and mother felt relief when they became sure that their sons had kept their faith in Jesus Christ, who gave us much relief and comfort. My brothers have given us courage in the face of persecution; we are never afraid and never worry anymore.”

“The Coptic Church has a long history of martyrdom and has gone through many ages of persecution throughout its history.” Said Father Abu Fanus Unan, who serves at the shrine, which is housed in the newly built Church of Faith and the Homeland.

He told ACN: “We are proud of the blood of these martyrs who refused to recant their Christian faith.”

The Coptic Church honors many martyrs who died in centuries past, but the priest testified to the powerful impact of the witness of “contemporary martyrs who refused to recant the name of Jesus Christ. Their example strengthens our faith.”

The shrine is preparing to publish a book documenting miracles that are attributed to the martyrs’ intercession.

“There are many miracles in the village attributed to them. A woman with cancer was cured after her prayer at their shrine,” reported Father Abu Fanus, who added that many people were baptized and became Christians because of the example of the 21 martyrs.

“The Coptic Church survives thanks to the blood of her children,” the priest said.

The remains of Matthew Ayariga from Ghana are still in Libya. The Libyan ambassador to Egypt has promised the body will be transferred to Egypt once the political situation in Libya stabilizes.

Posted by EC Gefroh Posted 10:26 AM No comments: 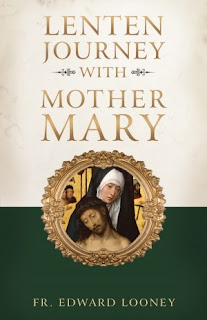 A Lenten Journey with Mother Mary is a beautifully written book to guide you through each day of Lent.  Fr. Looney has written the book based on the many Marian apparitions of our Lady.  Noting that our Blessed Mother brings to each apparition important motherly requests, Father focuses on a different aspect of her messages for each week of Lent as well as Holy Week.

While the book can be used any time of the year, it is particularly geared toward the season of Lent.  There is a meditation, prayer and action for each day.  Following the daily readings will offer practical advice to help one grow spiritually during Lent.

The book explains the message of many of Mary's apparitions, some well known, like Lourdes and Fatima, and some not as well known, such as La Salette and Beauraing.  Tying the apparitions with each day and week of Lent, this book offers a unique way to walk the Journey of Lent with our Mother Mary.  It will help the reader grow closer to our Suffering Lord as he draws closer to His Mother.