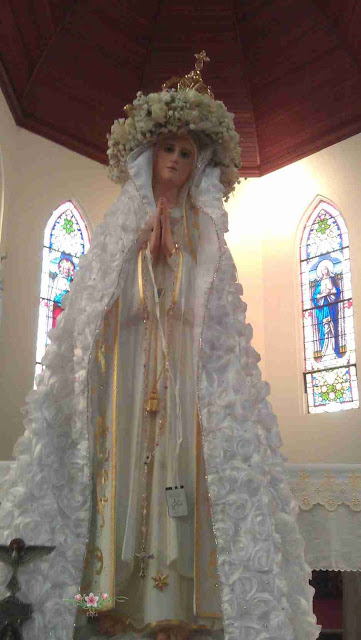 The message of Fatima which springs from the apparitions of Our Lady, is a solid blueprint for life.  It cries out to be put into practice for the good of the world, and the salvation of souls.

Its teachings are in harmony with the Gospel, calling to mind the following elements with new emphasis:

-  The mystery of the Blessed Trinity;

-  The providence of God, which directs and governs the world and presides over the events of human history;

-  The omnipotence and omniscience of God, Who knows and realizes all things according to His exalted designs.  It foretold future events and revealed miraculous signs to prove the truth of God's predictions;

-  God, Who rewards or punishes, according to the good or evil done, though He is ever merciful towards sinners;

-  The reality of heaven, hell and purgatory;

-  The existence of Guardian Angels, not only of individuals but also of nations;

-  Sanctity as a condition of true happiness even on earth, and docility and correspondence to grace, the mysterious mixture of divine action and human effort;

-  The reality of sin as an offense against God with its tragic consequences for sinners and nations;

-  The flight from sin and amendment of life as an indispensable condition of the sate of grace;

-  The Christian solidarity of the Mystical Body of Christ;

-  The intercession of the Mother of God as a powerful mediatrix and dispenser of grace;

-  The necessity of penance and prayer, with their value of atonement and intercession;

-  The love of the Heart of Jesus and of the Immaculate Heart of Mary - the great revelation of Fatima;

-  The importance of Marian devotions, particularly, the excellence and efficacy of the Rosary, the new devotion of the first Saturdays, and the value of Consecration of the Immaculate Heart of Mary;

-  The powerful action of grace, which so transformed the three little children at Fatima and led them to such a close union with God.

-  Russia, simultaneously a scourge that punishes the sins of the world, and the object of Divine Mercy, by the promise of its conversion through the intermediary of the Heart of Mary;

-  The sanctification of the family, in imitation of the vivid scene of the last apparition;

-  Devotion to the Holy Father and the and the necessity of purity and modesty;

-  The final triumph of the Immaculate Heart of Mary.