WAY OF THE CROSS 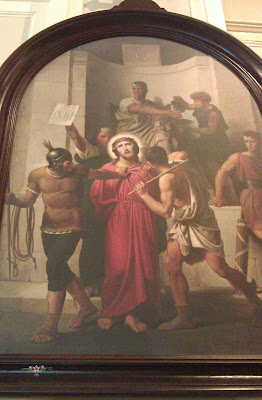 Christians have never been required to make a pilgrimage to Jerusalem as Muslims have been required to visit Mecca to commemorate Muhammad's hegira or flight.  Rather Christian holy places have been transported to churches  across the world in the form of the stations of the cross.  "Making the stations" requires only moving from one station to the next.  The stations themselves, although often accompanied by elaborate artistic depictions, are simply small wooden crosses.

A tradition holds that the Virgin Mary daily retraced the steps of the way of the cross.  However, only in the Middle Ages did this devotion flourish.  In the earliest centuries of Christianity the focus was on the risen Christ.  Medieval Christians emphasized the passion and death of Jesus and wished to tread in his very footsteps.  Those who could afford to do so made a pilgrimage to the Holy Land.   Others had the Holy Land brought to them in the form of the stations of the cross, reproductions of the holy places of Jerusalem erected in their locales.

When the Franciscans were given custody of the holy places of Jerusalem in 1343,  they aroused in the faithful an active interest in the passion of Christ.  In the eighteenth century the Franciscan St. Leonard of Port Maurice, "preacher of the way of the cross," spread the devotion widely, making it possible for non-Franciscan churches t0 have the stations.  Previously this was not allowed.

Originally fourteen stations were the norm.  In 1975 Pope Paul VI approved a fifteenth station, the resurrection.
Posted by EC Gefroh Posted 8:57 AM No comments:

Labels: Devotions: Stations of the Cross

A Lenten Reflection - The Story of a Prince 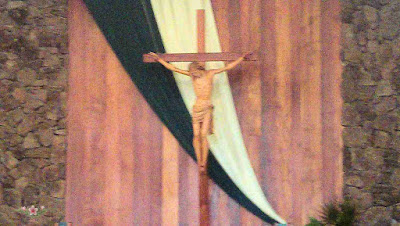 "There was once a king, lord of many kingdoms, who had one only son, so beautiful, so holy, so amiable, that he was the delight of his father, who loved him as much as himself. This young prince had a great affection for one of his slaves; so much so that, the slave having committed a crime for which he had been condemned to death, the prince offered himself to die for the slave; the father, being jealous of justice, was satisfied to condemn his beloved son to death, in order that the slave might remain free from the punishment that he deserved: and thus the son died a malefactor's death, and the slave was freed from punishment."

The “people live in fear.” That was the thrust of an urgent pastoral appeal issued by South Sudan’s seven bishops, who charged both government troops and the armed opposition with using force against civilians as part of an ongoing civil war in the country.

A copy of the bishops’ pastoral letter was obtained by international Catholic charity Aid to the Church in Need.

The prelates wrote: “Some towns have become ‘ghost towns’, empty except for security forces and perhaps members of one faction or tribe. Even when they have fled to our churches or to UN camps for protection, they are still harassed by security forces.”

The bishops insisted that the humanitarian crisis that grips South Sudan is mostly due to insecurity and poor economic management: “Millions of our people are affected, with large numbers displaced from their homes and many fleeing to neighboring countries, where they are facing appalling hardships in refugee camps.”

The Church leaders, expressing concern that “some elements within the government appear to be suspicious of the Church,” affirmed that the Church does not take sides in the conflict.

The wrote: “We are FOR all good things - peace, justice, love, forgiveness, reconciliation, dialogue, the rule of law, good governance – and we are AGAINST evil - violence, killing, rape, torture, looting, corruption, arbitrary detention, tribalism, discrimination, oppression.”

The bishops expressed their readiness to meet with any party “who we believe has the power to change our country for the better.”

The bishops called on Catholics in South Sudan to “work for justice and peace; reject violence and revenge.” They also asked for prayers that Pope Francis’ intention to visit the nation later this year will become a reality.