Reviewed by Rosa Sautner, a Catholic  homeschooling mother of two.

In a letter to Cardinal Carlo Caffarra, then Archbishop of Bologna, Italy, Sister Lucia dos Santos, one of the three seers of Fatima said, ‘The final battle between the Lord and the kingdom of Satan will be about Marriage and the Family.’ (CNA. (2016). Fatima visionary predicted 'final battle' would be over marriage, family.  https://www.catholicnewsagency.com/news/fatima-visionary-predicted-final-battle-would-be-over-marriage-family-17760)

It is no surprise then that we are seeing such unrelenting attacks on marriage, the family, and children.  We are in a warfare, the battle between good and evil, between Christ and the devil.

Kathleen Beckman has done families a great service by compiling this resource of strategies and prayers for protecting families against the attacks of the devil.

In this book the reader will find "Five Common Entryways for Demons" (p. 54), "The Six Categories of Demonic Activity" (p. 91), "The Ten Commandments and The Diabolical Counterparts" (p. 127), and "Unmasking Diabolical Disguises" (p. 173.)

Chapter 8, "Unmasking Dangerous Diabolical Disguises" is exceptionally useful in explaining some common ways that the devil insinuates himself into the lives of unsuspecting people who sometimes unwittingly play the devil's game.

A particularly instructive and rather chilling part of the book is Appendix B "Family Deliverance Case Histories," where Kathleen Beckman explains how certain sins can draw down the influence of the devil in a family.

This book is highly recommended and I would go so far as to say that it should be required reading for every family today. 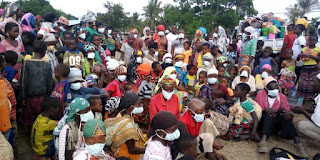 CABO DELGADO, the northernmost province of Mozambique, has been going through great turmoil ever since October 2017. In a series of more than 600 brutal attacks in nine separate districts, armed insurgents, who claim allegiance to the Islamic State, as well as in counter attacks by the national security forces, it is estimated that more than 2,000 people have been killed, while over 310,000 others have been forced to flee their homes.

The most recent massacres by the group calling itself “Islamic State in Central Africa” (ISCA) are just now coming to light: on Nov. 8, alleged jihadists are reported to have attacked the small town of Muidumbe, beheading and dismembering the bodies of dozens of people in a local football stadium.  Also reported is the massacre of more than 15 children and young people, along with their adult tutors, who were preparing them to take part in the traditional initiation rites of the Makonde tribe.

“It seems as though they are trying to evict the entire population of the northern part of Cabo Delgado province, expelling the ordinary people without the slightest vestige of compassion,” Sister Blanca Nubia Zapata told Aid to the Church in Need (ACN). She was speaking from Pemba, the capital of Cabo Delgado Province.

“More than 12,000 people have arrived here in the past two weeks. We cannot keep up. Women and children are arriving, and older people who have been walking for days. Some have died on the way, on the roads and the forest tracks.”

“It is 115 miles, but you can’t imagine what our ‘roads’ are like; it’s terribly difficult walking along these tracks, and across the countryside, three or four days on end without food, without water, carrying their children on their back. There are women who have given birth on the road,” said Sister Blanca, a member of the Theresian Carmelites of Saint Joseph.

In the last few weeks hundreds of small boats have been arriving by sea. Whether in boats or canoes, the people are desperate to escape the barbarous killings. “We are doing all we can. Very often we can do no more than listen, ask how they are feeling and listen to them. They’ve left everything behind, hoping to escape with their lives,” said the sister.

“All they want to do is to get away from there; they are simply terrified. Many of the families have asked our help, and we have rescued the families of the children at the school, with immense difficulty, with private vehicles and the help of third parties,” Sister Blanca recounted.

Around a week ago, in a video by Caritas Mozambique that was sent to ACN, Bishop Luiz Fernández Lisboa, the bishop of Pemba, describes the situation as seen from Paquitequete, a suburb of Pemba, on the coast: “Already there are around 12,000 refugees who have arrived and they are continuing to arrive. Some are coming in the wake of the attacks they have suffered, while others have fled in advance because they are afraid.”

“When they arrive here, they have nowhere to sleep; there are just blankets and makeshift shelters, and still there is no place that has been designated for accommodating them. Some people have been taken in by local families, whether because they have relatives here or simply because people are moved by their situation and have taken people into their homes.”

“It is an extremely difficult situation and hundreds of people are simply sleeping here on the beach. Sadly, there have been some people who have died on the journey, in some cases because these people spent two or three days in boats, at sea, and arrived sick and dehydrated.”

“This is a desperate humanitarian situation, for which we are asking, indeed begging the help and solidarity of the international community,” Bishop Lisboa said.

“Following this appeal from the bishops, we want to help the Diocese of Pemba and the neighboring dioceses with emergency aid—for a total of $120,000 for the victims of Cabo Delgado, on top of the projects we are already sponsoring in the dioceses for its priests and religious.”

“In addition to this aid, for blankets, clothing, food, basic hygiene products, and also seeds and tools—whatever is needed—we want to help ease the worst of the suffering and trauma. So, we have already set up a program for diocesan teams to provide psychological support and counseling to the traumatized refugees in the parishes,” said Regina Lynch, head of the projects department at ACN International.

“It looks as though there is finally some international attention being paid to this long-running and largely forgotten tragedy over many long and painful months. Already back in February, ACN published an exclusive interview with Bishop Fernández Lisboa about the crisis and the fear the people were suffering. They have burned down churches and destroyed convents, and also abducted two Sisters.”

“Almost nobody has paid any attention to this new focus of terror and jihadist violence in Africa, which is affecting everybody, both Christians and Muslims alike. Let us hope that there will finally be a response to this crisis in northern Mozambique, for the sake of the poorest and most abandoned,” said Ms. Lynch.

With picture of displaced people in Cabo Delgado (© ACN)