From the USCCB - White House Misrepresents Its Own Contraceptive Mandate

The Obama administration, to justify its widely criticized mandate for contraception and sterilization coverage in private health plans, has posted a set of false and misleading claims on the White House blog (“Health Reform, Preventive Services, and Religious Institutions,” February 1).In what follows, each White House claim is quoted with a response.

Read this text in its entirety here.
Posted by EC Gefroh Posted 2:31 PM No comments:

‎"With what humility should we assist at Mass, if we realized that our guardian angel was kneeling besides us, prostrate before the majesty of God!" - St. John Vianney

"When our dear savior left this world, he did not wish to leave us alone, and therefore he devised a means of remaining with us in the Holy Eucharist to the end of time, that even here below we may enjoy his sweet company." - St. Alphonsus de Liguori

"O Lord!, all our troubles comes to us from not having our eyes fixed upon you. - St. Teresa de Avila

"To separate Christ from His mother in our piety is to divide Christ...Where the mother is left out, the Son is no longer understood." - Bl. Columba Marmion

"...It is one thing to love God, and another thing actually to feel the happiness of His presence." - Ven. Elizabeth LeSeuer

"O Sacred Heart of Jesus...May every beat of my heart be a prayer to obtain mercy and pardon for sinners." - St. Mary Euphrasia Pelletier

"My God, may everything I do and suffer today be for love of you." - St. Bernadette

"My Jesus, may all men ever know, adore, love and praise you, every moment in the most Holy and Most Divine Sacrament."

Sources of these quotes are from various books I have read as spiritual reading.
Posted by EC Gefroh Posted 2:19 PM 2 comments: 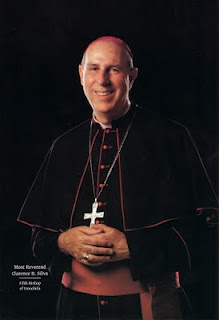 Reprinted with permission of our bishop, His Excellency Bishop Larry Silva, Diocese of Honolulu

LETTER TO THE FAITHFUL

Dear Brothers and Sisters in Christ:

I write to you concerning an alarming and serious matter that negatively impacts the Church in the United States directly, and that strikes at the fundamental right to religious liberty for all citizens of any faith. The federal government, which claims to be “of, by, and for the people,” has just dealt a heavy blow to almost a quarter of those people — the Catholic population — and to the millions more who are served by the Catholic faithful.

In so ruling, the Administration has cast aside the First Amendment to the Constitution of the United States, denying to Catholics our nation’s first and most fundamental freedom, that of religious liberty. And as a result, unless the rule is overturned, we Catholics will be compelled either to violate our consciences, or to drop health coverage for our employees (and suffer the penalties for doing so). The Administration’s sole concession was to give our institutions one year to comply.

People of faith cannot be made second class citizens. We are already joined by our brothers and sisters of all faiths and many others of good will in this important effort to regain our religious freedom. In generations past, the Church has always been able to count on the faithful to stand up and protect her sacred rights and duties. I hope and trust she can count on this generation of Catholics to do the same. Our children and grandchildren deserve nothing less.

And therefore, I would ask of you two things. First, as a community of faith we must commit ourselves to prayer and fasting that wisdom and justice may prevail, and religious liberty may be restored. Without God, we can do nothing; with God, nothing is impossible. Second, I would also recommend visiting www.usccb.org/conscience, to learn more about this severe assault on religious liberty, and how to contact Congress in support of legislation that would reverse the Administration’s decision.

Sincerely yours in Christ,

Prayers for Our Pets: St. Blaise: Bishop, Martyr and Healer of Wild Animals
Posted by EC Gefroh Posted 11:57 AM No comments:

Prayer to Obtain the Love of the Infant Jesus

O adorable Infant,
I should not dare to present myself before thee,
did I not know that Thou Thyself invitest me to approach Thee.
It is I, by my sins,
who made Thee shed so many tears int he stable of Bethlehem,
but since Thou art come upon earth to pardon penitent sinners,
vouchsafe to pardon me.
I sincerely repent of having despised Thee,
my Lord and my God,
who art so good and hast loved me so much.
The grace that I ask is that I may love Thee
henceforth with all my heart;
inflame my soul entirely with Thy holy love.
I love Thee,
O my God, who hast become an Infant for me.
Grant that I may never cease to love Thee.
O Mary , my Mother! Thou art all-powerful by thy prayers;
I ask but one favor of thee, namely, that thou wilt pray to Jesus for me.

Labels: Presentation of the Lord

EWTN This Week: How did the Culture of Death Make Such Gains? How Should Catholics Approach the Bible? What are the Four Threats to Marriage?

Irondale, AL – Have you ever wondered how the culture of death gained such a foothold in society? What happened to make things go so wrong – and what can you do in your own country to build a culture of life? Find out in “The Thomistic Response to the Culture of Death,” part of a larger series “Thomas Aquinas in Today’s World” airing exclusively on EWTN. Download the entire series – for free -- to your desktop or MP3 player from EWTN’s audio library at http://bit.ly/yKbPH5. You can also purchase the DVD from EWTN Religious Catalogue at http://bit.ly/wExEaZ. Want to know more? Purchase “50 Questions on the Natural Law,” available from EWTN Religious Catalogue at http://bit.ly/w4ei2Q.
Discover a very successful Catholic drug rehabilitation center in Knock, Ireland. Watch “Cenacolo: From Darkness to the Light.” Airs 1 p.m. ET, Tuesday, Jan. 31; 5 a.m. ET, Thursday, Feb. 2; and 6:30 p.m. ET, Friday, Feb. 3 – exclusively on EWTN. Find EWTN at www.ewtn.com/channelfinder.
Would you like to understand more about the inner workings of the Vatican? Watch “EWTN’s Vatican Report.” Airs 5:30 p.m. ET, Tuesday, Jan. 31; 3:30 a.m. ET, Friday, Feb. 3; and 6:30 p.m. ET, Saturday, Feb. 4 – exclusively on EWTN. Find EWTN at www.ewtn.com/channelfinder.
If you missed EWTN’s “Life on the Rock” this week, which featured highlights from the “Walk for Life West Coast,” you can still see it on EWTN’s website! Click here, http://www.ewtn.com/audiovideo/index.asp, scroll down to “Life on the Rock” and click audio or video. We suggest video since the video package is especially awesome this week!
How should Catholics approach the Bible? Father Mitch Pacwa begins his explanation of Pope Benedict XVI’s encyclical, “Verbum Domini.” Airs 2 p.m. ET, Tuesday, Jan. 31 – exclusively on EWTN. Find EWTN at www.ewtn.com/channelfinder.
Has any place on earth given the world more saints than Europe? Yet many of the churches there today are virtually empty. John Hogan and Fr. Owen Gorman, S.T.L., the hosts of EWTN’s series “Forgotten Heritage and Europe,” visit Fr. Mitch Pacwa on the set of “EWTN Live” to talk about re-discovering Europe’s amazing heritage. Airs 8 p.m. ET, Wednesday, Feb. 1 – exclusively on EWTN. Find EWTN atwww.ewtn.com/channelfinder.
Get introduced to three of G.K. Chesterton’s best works! Dale Ahlquist, President of the American Chesterton Society, and host of EWTN’s series “G.K. Chesterton: Apostle of Common Sense,” visits “Bookmark” Host Doug Keck to discuss “Lepanto,” “The Catholic Church and Conversion,” and “The Well and the Shallows.” Find out why Chesterton’s views are as relevant to this generation as they were in Chesterton’s own lifetime. Airs 5:30 p.m., Wednesday, Feb. 1 – exclusively on EWTN. Find EWTN at www.ewtn.com/channelfinder.
Never has a series on marriage been more important than it is now – with marriage under attack on all fronts! Don’t miss EWTN’s Home Video Highlight “Love and Life in the Divine Plan.” This multi-part series on the four threats to marriage is packed with eye-opening lectures. Purchase it from the EWTN Religious Catalogue at http://bit.ly/xv7S8d.
“Shock and Awe.” Don’t miss EWTN Rome Bureau Chief Joan Lewis’ blog on the Jan. 20 decision by Health and Human Services, which requires that sterilization, abortifacients and contraception be included in virtually all health plans. Lewis provides the links you need to protest this decision. Find her blog at http://bit.ly/bFl5ze.
“Suffering Puts Love to the Test.” This truth is the title of a recent address by Pope Benedict XVI to the 26th International Conference organized by the Pontifical Council for Health Care Workers. The Council was founded by Pope John Paul II whose later years were marked with constant suffering. If you or someone you love is suffering, you might want to check out what Pope Benedict has to say in EWTN’s on-line library, http://bit.ly/yu4dYP. If life is good right now, you may want to print this out and save it for a rainy day.
Moms! Need a little inspiration and encouragement? Check out “Everyday Blessings for Catholic Moms.” These short spots air throughout the day on EWTN or you can find them all anytime of day on EWTN’s YouTube channel at www.youtube.com/ewtn. Just type “everyday blessings” in the search box. God bless you – and thank you for choosing life!
Posted by EC Gefroh Posted 11:25 AM No comments:

Prayer to St. John Bosco for the Protection of Young People