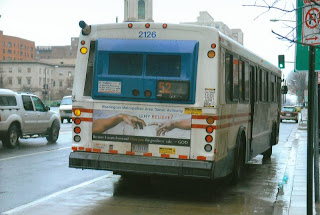 I received the following in an email from Cindy S.

Remember in December JoEllen Murphy, whose response to a humanist who-needs-God? ad campaign on Washington DC's Metro buses was to raise money to give voice to those of us who're not ashamed to say we do?

She raised the money! They're here!

But it gets even better! JoEllen writes:

We did it! We raised $14,000! From the bottom of my heart, I want to thank all of you for your donations, your prayers, your encouragement, interest, and support. Your enthusiasm for the project enabled us to reach the goal in only two weeks and two days!

We have purchased the ads, and due to a delay, the interior ads, which were scheduled to begin the 15th, will now start December 22, along with the taillight ads. We have enough money to run these ads for five weeks instead of four. This means that the ads will run through January 25th, and thus be up through the Inauguration and March for Life! The ads for the sides of the buses have also been purchased and will run December 29th - January 25.

Read the rest - and buy bumper stickers if you like - at I Believe Too.

These are great! In England right now we have an atheist poster on public transport which reads "There is probably no God! Now enjoy your life!" As if they need to advertise atheism! However, the fact they had to put probably in there makes me laugh- doesn't sound concrete enough does it? I guess they can't be as sure as they thought!

How exciting.. this is just wonderful news!!