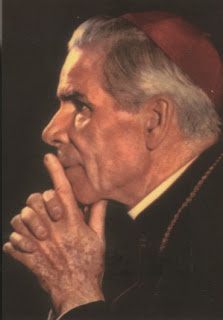 According to the Diocese of Paterson, memorial masses are scheduled to be celebrated worldwide on December 9th.


A worldwide celebration of Masses Dec. 9 will commemorate the 30th anniversary of the death of famed author, lecturer and television evangelizer Archbishop Fulton J. Sheen, as well as promote his cause for canonization.

Mayer, who is a board member of the Archbishop Fulton J. Sheen Foundation in Peoria, Ill., and president of its advisory council, credits her friend Washburne with conceiving the worldwide Mass idea.

You can read the rest here
Posted by EC Gefroh Posted 2:05 PM

Labels: Cause for Canonization: Archbishop Sheen

What a beautiful photo of Archbishop Sheen--it looks like an oil painting!
Thank you for posting this!

It does now that you mention it.