Could the French Revolution Have Been Avoided? 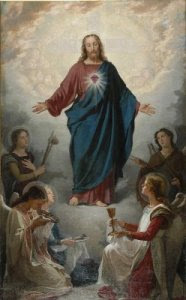 According to Edna McGrew in the book Herald of the Fatima Apparitions: John M. Haffert, that is what John Haffert, co-founder of the World Apostolate of Fatima, believed. In December 1673, Jesus appeared to St. Margaret Mary Alacoque and shared with her the devotion to His Sacred Heart. Jesus asked for a Communion of Reparation to His Sacred Heart be made on nine consecutive First Fridays. This was "...a final effort of His Love to favor human beings in the last centuries of the world, and to withdraw them from the empire of Satan, which He intends to destroy and to replace with the reign of His Love."

"Then in 1689 Jesus told St. Margaret Mary: 'The eternal Father, wishing to repair the bitterness and agony which the Heart of Jesus endured in the palaces of earthly princes, wishes to make use of the reigning monarch of France [Louis XIV] to proclaim public devotion of reparation to that Sacred Heart.' It was a comparatively simple request. The King was to consecrate France to the Sacred Heart and to erect a shrine in which the picture of Jesus' Divine Heart would be honored. In addition, the King was to ask the Holy See to establish a Mass honoring the Sacred Heart.

Throughout his life King Louis XIV ignored this request from God. In the meantime, impoverished by the continuous wars during the King's reign, France faced an economic crisis which ultimately resulted in the French revolution. As John [Haffert] points out: 'exactly 100 years after the Sacred Heart made His ignored request, in 1789 came the French revolution which destroyed the monarchy and set the stage for worldwide disaster.'"

So very true, Esther. Thank you for reminding us of the warning of St. Margaret Mary.

King Louis XVI made the consecration privately while he was very ill and under house arrest during the Revolution in the spring of 1791. It was too late to stop the Revolution but perhaps the King's offering and prayer helped to bring many graces to France in the following century, in which there would be St. John Vianney, St. Catherine Labouré, St. Bernadette, St. Therese, etc.
Here is the Dedication of Louis XVI to the Sacred Heart: