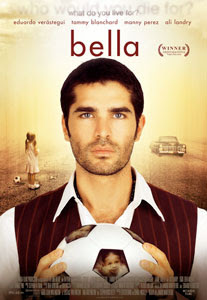 My family and I were not able to attend the Bella movie and dinner fund raising hosted by a local prolife group. Happily, we found that the movie was going to be shown at the same theater where the fundraiser was held, for a very limited time. Yesterday afternoon, we jumped at the chance.

There was only three of our friends there when we arrived. I sat there and prayed that others would show up to support a prolife movie of such quality! God answered my prayers. For a late Friday afternoon, the theater was well filled.

Other than glancing at reviews of the movie, I tried to avoid reading any reviews or commentaries because I did not want to be disappointed by the hype.

From beginning to end, the movie captured my attention and my heart. It was a very well done movie considering it was what most of Hollywood would consider low-budget.

Since many of you still have not seen it, I will not go into any details. But as I was sitting at the theater as the credits went rolling by at the end, I asked myself why I liked it so much. It was for the following reasons:

All of the above things are dear to my heart.

The only problem I had with the movie and which most of you only English speakers will not even be aware of, is the constant use of one particular curse word in Spanish. It was just so unnecessary. I wonder if it was given the PG-13 rating because of that word usage. It made me bristle every time I heard it.

Lastly, and BTW, The choice of the main actors had to be divinely inspired.
Posted by EC Gefroh Posted 8:40 AM

I've been waiting so long for it to come out and now I'm too busy to go. I have to get some time and someone to go with me.

The same thing happened to us. We had been planning to go to the fund raiser for a month and then we couldn't go.

I saw this on Bill O'Reilly. The actor and producer spoke VERY well on it.

The HYPOCRISY of Hollyweird is that though they are villifying this film the PRO-ABORTION movie, 'Vera Drake' received an Oscar nomination! Go figure!

Thanks for the heads up on this particular movie Esther:)

I didn't know that about Vera Drake. I remember my dh buying it and bringing it home thinking I would like a movie like that. He returned it when I told him what it was about.
God bless Marie,