For a while now, I have been watching and recommending movies by Protestant film companies, otherwise referred to as Christian films.  We have watched many movies by Christian Films as well as PureFlix. However, this recommendation came to the end the other evening.

I had enjoyed a movie produced by the latter film company entitled The Book of Daniel. I thought it was good timing seeing as the reading of the day was about the three  young Jewish youths being placed in a very hot fire by King Nebuchadnezzar because they refused to bow down to the statue of the king.

However, it was before Mass the following morning that my mom brought something to my attention.  She asked me if I thought the statue looked a little like a pope.  I looked at her quite quizzically and responded with an emphatic "NO", that it was the statue of Nebuchadnezzar.  She insisted to me that it was an image of a Catholic pope.

Later that day, I fast forwarded to the image of the statue in the movie (which we watched via Netflix).  To my surprise, I saw that my mother was correct! (Although, to me, it looks more like St. Patrick without his bishop's mitre).

Since when is a pagan king depicted with a shepherd's staff, two fingers raised in blessing and with crosses on priestly vestments?

UPDATE: A reader actually found that the filmed appears to have used a Russian Orthodox statue of St. Nicholas as the model for Nebuchandezzar. 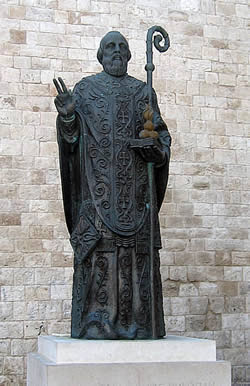 Picture source The following is how I pictured Nebuchadnezzar and I'm sure many others did too: 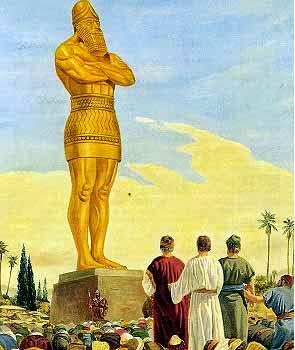 You can see there is a huge difference between the depiction by Pureflix and a Protestant bible illustration.

To be fair and to give the producers the benefit of the doubt, I contacted them via Twitter. But they did not respond.

In these times where forces of evil are persecuting Christians everywhere, I was hoping this persecution would unite us.  Sadly, it looks like Catholics are still not considered Christians by some who call themselves Christians, and who knows, something even worse perhaps.
Posted by EC Gefroh Posted 12:10 PM

Maybe it's St Nicholas - see the spheres in his right hand? That looks like one of his symbols. Would also fit with the crozier.

Unbelievable, it DOES look like St. Patrick. My previous parish was St. Patrick Parish and there was a statue there that looked an awful lot like this one.

Mary, I really wanted to give them the benefit of the doubt too.

I'm not Catholic but when I saw the shot in the film I thought the same thing (not Pope but Catholic Saint). I'm not sure what the reason for that is. It's almost as if they just used a real statue and digitized it for the film because it was easier. The film has another, I think bigger, problem. It strongly misrepresents the 4 kingdoms represented by the image in Nebuchadnezzar's dream. But that could get into a really long post so I'll leave it at that.

Ok, so I took a look around the interwebs and it is St. Nicholas.

Nice find! The Russian Orthodox statue of St. Nicholas seems to be what they used in the film. Thanks!