The founder of the Redemptorists just happens to be one of my favorite saints.


I have had crosses in plenty-more than I could carry, almost. I set myself to ask for the love of crosses-then I was happy. 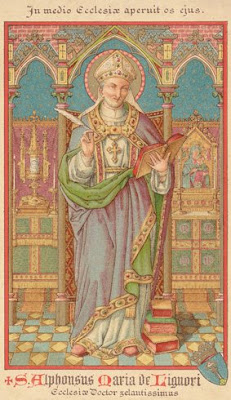 St. Alphonsus Liguori came from a distinguished family in Naples. He gave up being an accomplished lawyer, for the priesthood. In 1732, he founded what is now known as the Redemptorists. Because of many difficulties and misapprehensions, St. Alphonsus was condemned and removed as their leader by Pope Pius VI. He was appointed bishop in 1762 and governed the small diocese of Sant' Agata dei Goti with "great wisdom and industry" until forced to resign in 1775, due to poor health. The difficulties with the Redemptorists became even more troubling to him after this time. Yet St. Alphonsus found the time to devote himself to ascetical and moral theology. It was during the last year and a half of his life that he was tormented "with the most fierce spiritual trials, but he died in peace in 17687, within two months of his ninety-first birthday. He was declared a doctor of the Church in 1871.

- Source A Dictionary of Saints by Donald Attwater 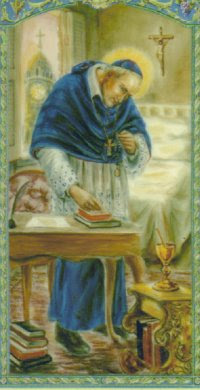 
The greatest glory we can give to God is to do his will in everything. Our Redeemer came on earth to glorify his heavenly Father and to teach us by his example how to do the same. St. Paul represents him saying to his eternal Father: “Sacrifice and oblation thou wouldst not: But a body thou hast fitted to me . . . Then said I: Behold I come to do thy will, O God[5].” Thou hast refused the victims offered thee by man; thou dost will that I sacrifice my body to thee. Behold me ready to do thy will.

Uniformity with God's Will
Posted by EC Gefroh Posted 9:27 AM

Great pictures! St. Alphonsus is one of my best friends, too! His books are a life-changing experience.

Elena, I think I could guess that :-)