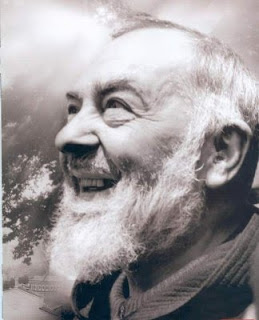 "Joy, with peace, is the sister of charity. Serve the Lord with laughter. "
- Padre Pio
Picture source 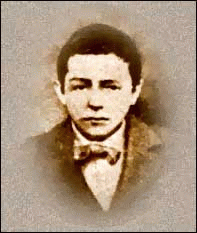 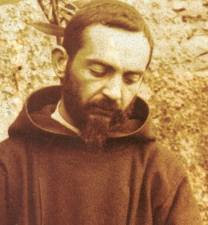 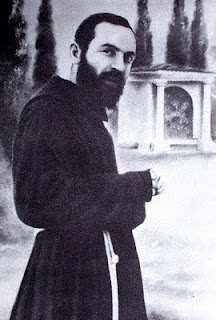 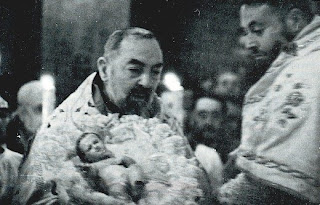 "...Nothing can be heard except the sobs and whimpers of the infant God. And by means of his crying and weeping he offers to the Divine justice the first ransom for our redemption..." 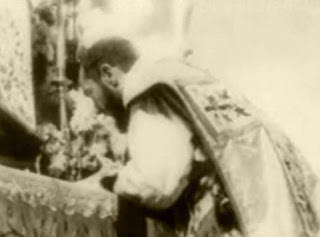 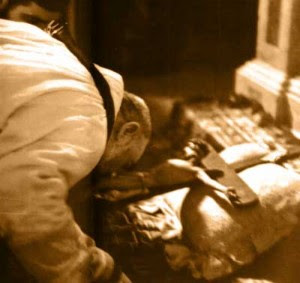 Padre Pio received the Stigmata in 1918 while praying before a cruficix.   One of his spiritual daughters asked Padre Pio a series of questions such as the following one regarding the Cross of Christ:


Q..."Father, how do you remain upright at the altar?"

R..."The way Jesus used to hold himself on the Cross."

Q..."Do you mean that you are at the altar hanging from the Cross, the way Jesus did at Calvary?"

Q..."How can you keep yourself upright?" 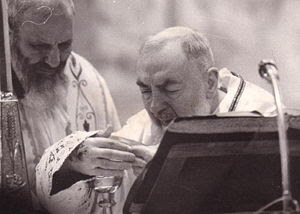 
"A Mass! Ask an angel" — states Padre Pio — "what a Mass is and he will answer: I understand what it is and why it is celebrated, but I cannot understand all the value it has. One angel, one thousand angels, all of Paradise thinks the same. And you, you who receive the benefits from it, you do not want to meditate on it"?

..."When you go to Mass", continues Padre Pio, "concentrate to the maximum on the great mystery being celebrated in your presence: "The redemption of your soul and the reconciliation with God." 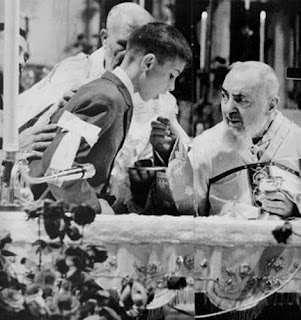 "Jesus likes to give Himself to simple souls; we must make an effort to acquire this beautiful virtue of simplicity and to hold it in great esteem. Jesus said: Unless you turn and become like children, you will never enter the kingdom of heaven. But before He taught us this by His words he had already put it into practice. He became a child and gave us the example of that simplicity he was to teach us later also by his words. Let us empty our hearts and keep far from us all human prudence. We must try to keep our thoughts pure, our ideas upright and honest and our intentions holy." ... From a letter to Padre Agostino from Pietrelcina, 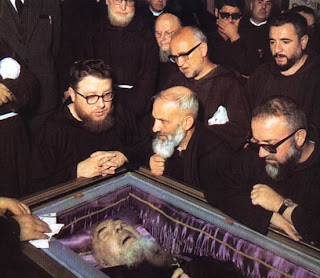 In 1959, when the new church at San Giovanni Rotondo was dedicated, a lady from Naples approached Padre Pio, very distressed. She felt certain that the blessing of the new church was an omen of his death. "No," he reassured her, "I’ll die when they bless the crypt."

The crypt to which he referred was a room which had been excavated beneath the sanctuary of the church to serve as Padre Pio’s tomb.

One day, Padre Romolo sprang a question on Padre Pio: "Are you afraid of death?" Padre Pio reflected for a moment. Then he said, almost flippantly: "No." He had been praying for his death all his life... 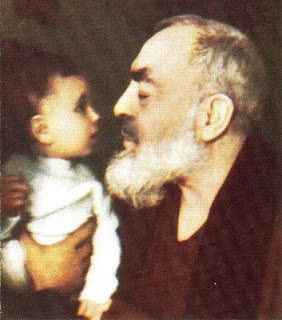 
-- "I have made a pact with the Lord: when my soul has been purified in the flames of purgatory and deemed worthy to be admitted to the presence of God, I will take my place at the gate to paradise, but I shall not enter until I have seen the last of my spiritual children enter." ... from a letter to spiritual daughter Antonietta Pompilio

Taken from the book "The Life of Padre Pio: Between the Altar and the Confessional" by Gennaro Preziuso, St. Pauls, 2000. pp. 150-1, 197 --
The only saint known to have made such a promise
Source

To become a spiritual child of Padre Pio, please visit The National Center for Padre Pio
Posted by EC Gefroh Posted 10:01 AM

Thank you so much for making this post. I'm grateful to have found it. St. Padre Pio lifted up my spirits today. It's exactly what I needed. I've always hoped that I was a Spiritual Child of his. There's always hope.

St Padre Pio, pray for us.

La Verne, thanks for letting me know :-)
God bless,