Tradition and the Art of Native Hawaiian Basket Weaving 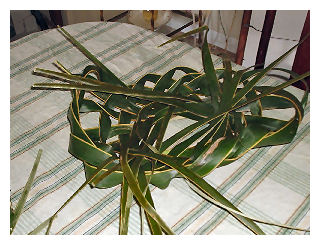 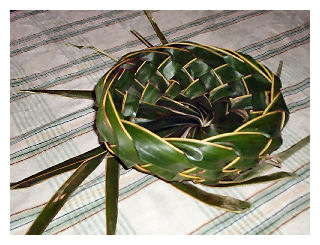 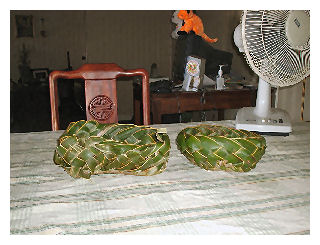 If you look in the Catholic Dictionary, you will find a very long definition for the word tradition.

"It means properly the act of handing down, and thus the doctrine so handed
down. In its widest sense it includes all truths or supposed truths handed
down from one generation to another; and in all societies which have no
literature tradition is, with all its manifold imperfections, the great bond
between the present and the past, and one of the great distinguishing marks
between man and the brutes, which latter have no tradition, and therefore no
history...

What does the above definition have to do with Hawaiian basket weaving?

We have a neighbor who graciously offered to teach a couple of us moms and our sons how to weave baskets out of palm fronds.

So a total of six of us met yesterday afternoon, equipped with knives, cutting shears, palm fronds and Charlie our kapuna.

We were first taught which palm fronds to collect or pick. Charlie told us which were the ones that were good for basket weaving without hurting the tree.

In the Hawaiian culture, you respect nature.

I should tell you that Charlie is not a native Hawaiian. However, he grew up on the big island with native Hawaiians. There he and the other keiki learned this skill.

Then we prepared the palm fronds. The palm fronds we used yesterday came from ones that were trimmed from local palm trees by professional tree trimmers. These fronds had to cure a few days in order to be pliable enough to work on. We trimmed the fronds for use and then Charlie told us that he would teach us with the understanding, that once we learned this skill, we in turn would teach others.

So first he taught my friend while the rest of us prepared our fronds for weaving. He then taught me. It was interesting to note that the way we weave these palm fronds is go towards the natural flow of the palm itself.

Charlie then told us he would not be teaching the boys....actually, three young men...instead, we as their mothers, would teach our sons this skill. In that way, the tradition is passed on from one family member to another. He also expects our sons, in turn to teach their children.

So you see, the connection between tradition and basket weaving.

This got me to thinking about the Catholic Church. The church is based on Jesus' teachings in Scripture but tradition also plays an important part in what the Church is. So when the Church is criticized for what some say is relying too much on tradition, that isn't necessarily a bad thing. If you think about it, tradition is a very important concept in all cultures, and the Church's tradition, came from Jesus and the men who knew Jesus very intimately.

That's sounds like a beauiful experience, and how BEAUTIFUL that the Moms learned how to weave the palm fronds so that they could pass the tradition to their sons. That really takes on the meaning of "tradition."

Awesome! I'm really impressed, and I love how you weaved the two traditions together.

Sunny, pun intended? LOL. Thanks so much!