ACN-USA News - Lebanon in crisis - 'We need a miracle’ 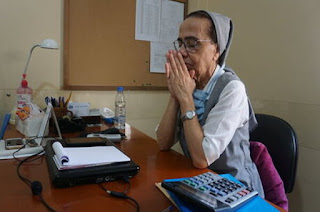 QUIETLY AND POLITELY, they form a line in the hot sun outside the Socio-Medical Intercommunity Dispensary in the poor Beirut neighborhood of Nabaa.  Some are elderly and live alone.  Others have families to feed.  In order to eat, all have put aside any embarrassment in accepting a handout.

The dispensary has been run by the Assembly of Female Religious Congregations since 1973. It was originally founded in 1968 by the Franciscan Missionary Sisters of Mary to serve those in need.

As Lebanon’s economy worsened, the dispensary expanded its medical and social mission to the needy to include distribution of hot meals in 2017, serving 250 portions per day. Now, as Lebanon teeters near economic collapse, the program has reached 1,200 portions a day.

“We’ve come to a situation in Lebanon where the middle class have become poor and the poor have gotten poorer,” says Sister Marie Justine el Osta, from the Maronite Sisters of the Holy Family, who serves as director of the dispensary.  “This is a disaster.”

Despite the increasing misery she encounters, the petite, energetic 72-year-old sister continues to offer a warm, encouraging smile to all those she serves.

“My strength comes from God, only,” Sister Marie Justine says. “Our mission is to stand by the people, to lift them up and give them a dosage of positivity and hope. To tell them that God is with us, that better days are coming.”

However, Sister Marie Justine admits, “what is really very painful for me is when you see people asking for the least of their rights—asking for food.  They feel they have lost their dignity.  It hurts me to see this.”

Maguy, a mother of four children, ranging from seven to-16 years old, began coming to the dispensary for the hot meal program a few weeks ago.

“It’s something I never thought I would do,” she said of being on the receiving end for food assistance.  “But I got to the point that I didn’t want to see my children starving.  I will do anything for them.”

“The Sisters and everyone here make me feel so welcome. God bless them for all they are doing.”

Hot meals are prepared off site and beneficiaries bring their own containers so they can eat at home.  Due to coronavirus precautionary measures, distribution takes place outdoors at the entrance to the dispensary.

The meal program was not disrupted by Beirut’s catastrophic blast that rocked the capital city August 4, which killed almost 200 people, injured another 6,000, and displaced more than 300,000 people.

Although it is located 2.5 miles from the blast site, the dispensary still suffered considerable damage, totaling nearly $40,000 in repairs. Sister is thankful that no one was injured at the dispensary, as it was closed at the time of the early evening blast.

“In this country, we live day by day.  We don’t know what will happen tomorrow.  We can’t see the light at the end of the tunnel,” says Sister Marie Justine.

“I always say that God always helps us.  Thank God, He sends us helpers,” she said, such as Aid to the Church in Need.  “We are so grateful.”

Yet the needs keep increasing, she points out. The possibility of a famine in Lebanon is very real. “We are getting closer (to famine), because goods are getting very expensive and people will not have enough money to buy anything from the supermarket,” Sister Marie Justine warns.  “We need a miracle.”

A recent United Nations report shows that more than 55 percent of Lebanon’s population is now in poverty and struggling to meet their basic needs, nearly double the percentage from a year ago.  The Lebanese currency has lost more than 80 percent of its value in less than a year and prices of food staples have doubled, tripled and even quadrupled.

Aid to the Church in Need has funded a program that is about to distribute food packages to more than 5,800 needy families affected by the Aug. 4 explosion. Sister Marie Justine will oversee part of the distribution. 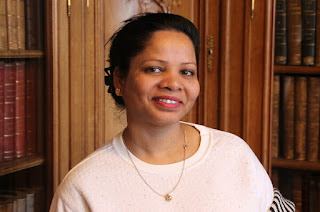 IN A VIDEO INTERVIEW she granted Aid to the Church in Need (ACN), Asia Bibi appealed to Pakistani Prime Minister Imran Khan on behalf of the religious minorities in Pakistan, citing in particular the plight of the many underage Pakistani girls abducted, forcibly converted and forcibly married.

The Pakistani Christian wife and mother, who has become a symbol of the suffering inflicted by anti-Christian persecution around the world, spoke from her current home in Canada to Alessandro Monteduro, the director of ACN’s Italian national office.

In their conversation, Monteduro mentions two young Christian girls, Huma Younus and Maira Shahbaz, both victims of such abuse, whose cases are being fought with help from ACN, not least by a constant campaign to raise awareness in the media.

Asia Bibi responded: “I know that these girls are being persecuted and I appeal to Prime Minister of Pakistan Imran Khan, please help our young girls, because none of them should have to suffer like this!”

Another particularly delicate issue concerns Pakistan’s so-called anti-blasphemy laws. As ACN’s own regular report on Religious Freedom Worldwide explains, these so-called “Blasphemy laws,” which were incorporated in 1986 into Pakistan’s Penal Code. They represent a severe restriction on freedom of religion and expression. Defiling of the Koran and making derogatory remarks about Mohammed are crimes punishable with life imprisonment and the death penalty, respectively.

In practice, these laws are frequently used in daily life as a means of persecuting religious minorities. Falsely accused, Asia Bibi herself, a mother of five, was imprisoned on death row for almost 10 years, until October 2018, when her sentence was finally vacated on appeal by Pakistan’s Supreme Court.

“At the moment of the founding of Pakistan and its separation from India, our founder Ali Jinnah, in his opening proclamation, guaranteed freedom of religion and thought to all citizens,” said Asia Bibi. “But today there are some groups which are using the existing laws, and so I appeal to the Prime Minister of Pakistan—especially for the victims of the blasphemy laws and the girls who have been forcibly converted—to safeguard and protect the minorities, who are also Pakistani citizens.”

“As a victim myself, I am speaking from my own experience. I suffered terribly and lived through so many difficulties, but now I am free and I hope that these laws can be changed in such a way as to prevent any abuse of them.”

Asia Bibi also spoke about Pope Francis. “I have two sets of rosary beads given to me by the Holy Father,” she said. “One was left behind in Pakistan and the other I still have with me and with it I pray the Rosary every day for the gift of faith and for those who are persecuted in Pakistan.”

“I thank the Holy Father Francis, and also Pope Benedict who interceded for me as well, and I thank ACN and all the other people who prayed for me.”

Monteduro, speaking on behalf of ACN, invited Asia Bibi and her family to come to Rome, an invitation she was delighted to accept. “I have a deep desire to come to Rome and, if possible, to meet with the Holy Father,” she replied, adding: “I pray for Pope Francis, that he may sustain us in our faith.”

Asia Bibi concluded with some words of thanks to ACN donors: “I am grateful to ACN and to all your benefactors, in Italy and all over the world, for supporting people like me who are persecuted on account of their faith.”

In an Aug. 31, 2020 interview with Voice of America, Asia Bibi appeared to disassociate herself from her forthcoming autobiography. But sources who spoke with her suggested to ACN that the interview, as presented, likely not accurately presented her views. Asia Bibi “believes that the heavily edited interview may have been misinterpreted and gave a false and confused picture of what she actually said,” one source said.

With picture of Asia Bibi (© ACN)