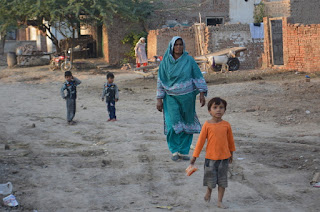 STRUGGLING CHRISTIAN FAMILIES in Pakistan, facing hardship and hunger as a consequence of the COVID-19 lockdown in the country, will be the beneficiaries of emergency aid provided by Aid to the Church in Need (ACN).

The measures taken by Pakistan to contain the coronavirus pandemic have further exacerbated the social hardship already facing the Christian minority in the country. The bishops of the Dioceses of Faisalabad, Islamabad Rawalpindi and Lahore appealed to ACN for help.

The prelates have proposed a broad emergency program to provide food packages to more than 5000 of the poorest families, families that were already living below the poverty threshold before the pandemic, and who are now facing a desperate situation.

ACN will support this program with an initial aid package totaling $165,000.

According to official figures, as of May 27, more than 59,000 Pakistanis have been infected by the virus and 1,225 have died. The two hardest-hit regions are the provinces of Sindh and Punjab.

"Christians, who make up around 2 percent of the population of the country, are among the poorest members of society in Pakistan. They have been particularly hard hit by the economic consequences of the coronavirus lockdown and the other restrictions imposed since the end of March this year."

"The coronavirus and the lockdown have deprived them of their already meager livelihoods, and forced them to live through the crisis in extremely cramped and overcrowded conditions with a minimum of resources. We simply cannot leave them to face a cruel choice between hunger and infection," explained the executive president of ACN International, Dr. Thomas Heine-Geldern.

According to local reports, and as ACN recently reported, certain NGOs in Pakistan and certain Muslim leaders have refused to help Christians and other religious minorities under existing COVID-19 emergency aid programs-even though these minorities are among those hardest hit by the consequences of the pandemic.

"The state-sponsored aid programs for the most part exclude the religious minorities, who are de facto second-class citizens and only rarely able to access state aid. Religious discrimination is sadly nothing new in Pakistan. What is deeply concerning, however, is that even during this global crisis such minorities are being clearly disadvantaged," Heine-Geldern said.

Many Christians work as day laborers, domestic servants, cleaners or kitchen staff, or sometimes as street traders or laborers in the brickworks. They earn the lowest wages and are dependent on their daily wage to feed their families.

"All these areas of employment are precisely the ones that have been most impacted by the economic shutdown, and many Christian employees have been simply dismissed without notice by families for whom they have worked for years, because these families are afraid that the poor may bring infection into their homes," ACN's executive president added.

In Faisalabad the emergency aid program supported by ACN not only involves the distribution of food parcels but also includes an awareness-raising campaign, aimed at informing families via radio and digital media as to how to protect themselves against the virus.

According to Heine-Geldern, there is also a plan to distribute face masks to the faithful in the churches and equip priests, catechists, diocesan staff and other volunteers with personal protection equipment as they continue to carry out their pastoral and social aid work.

"A major priority of our organization involves helping Christians who are suffering discrimination and persecution, and this is clearly the case in Pakistan. We have already provided emergency aid in the form of Mass stipends for the support of priests and their pastoral mission, but this is clearly not enough."

"Of course, we simply do not have the resources to meet all the needs, but we think it is important to make this gesture of solidarity, and we are hoping that other organizations and many people of goodwill will join with us in our efforts."

"Otherwise, Christians in Pakistan will be facing the threat of extinction," Heine-Geldern warned.

With picture of Khushpur, an almost entirely Christian village in the Diocese of Faisalabad (© ACN)

Founded in 1947 by Father Werenfried van Straaten, whom Pope John Paul II named "An Outstanding Apostle of Charity," the organization is now at work in over 145 countries throughout the world.

The charity undertakes thousands of projects every year including providing transport for clergy and lay Church workers, construction of church buildings, funding for priests and nuns and help to train seminarians. Since the initiative's launch in 1979, 43 million Aid to the Church in Need Child's Bibles have been distributed worldwide. 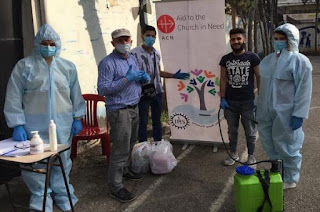 THE CONTINUING EMERGENCY facing Christians in Syria has been further exacerbated by the coronavirus pandemic. To mitigate its impact, Aid to the Church in Need (ACN) has launched a new $550,000 aid program to support 20,550 Syrian Christian families in grave need.

The emergency plan will benefit various denominations—Catholic, Orthodox and Protestant. Help is sorely needed as lockdown measures have plunged many families into a crisis, while straining the financial capacities of the local churches in Syria to the very limit.

“Each family will receive a one-off subsidy of some $28 so that they can purchase essential foodstuffs and articles of hygiene to protect themselves against the coronavirus. This may not seem much, but it represents approximately half the monthly income of an average Syrian family today and is thereby a lifesaver.”

“This emergency support will reach many people. However, it must be implemented without delay, before the pandemic spreads throughout the entire country,” explains Thomas Heine-Geldern, the executive president of ACN International.

The aid program covers seven separate projects and reaches various locations. Those supported by the program include many people from bombed-out cities that were heavily damaged during the civil war—for example, 6,190 families from Aleppo and 7,680 from Homs; but it will also help some 400 families from the towns of Al-Hassakeh and Al-Qamishli in northeastern Syria, where fighting continues.

“We are still supporting more than a hundred other projects, both small and large, in Syria,” said Heine-Geldern, adding: “Some have had to be cut back on because of the pandemic, but many are continuing, for example our project Drop of Milk, which supplies hundreds of babies and small children with vital milk rations.”

“We believe that this new aid program will be an important signal of encouragement for our brothers and sisters in this country, giving them spiritual comfort as well as financial support.”

Many people in Syria have already reached the end of their strength, as a result of the war and the ongoing economic sanctions. But now they have to face a new enemy, the coronavirus. “We are not going to abandon the Christians in Syria now,” insists Heine-Geldern.

During the nine years of the civil war, the Syrian Christians have suffered greatly. Prior to 2011 discrimination of Christians was rare, and there was only a limited number of Christian families choosing emigration. However, today Christians feel they have become second-class citizens, abandoned by the government and discriminated against by other Syrians.

During the war, Christians’ properties and possessions were destroyed, looted or sold off cheaply. Many have lost their jobs. On account of sanctions and closure of borders, it is difficult to get outside aid into the country. There is runaway inflation in Syria. On top of this, the banking system in neighboring Lebanon, which to some degree kept the system going in Syria, has collapsed because of that country’s own political and social crisis.

Then the pandemic hit.

With picture of Syrians fighting the pandemic in Homs (© ACN)