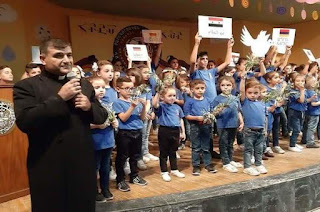 “THE WAR IN SYRIA IS NOT OVER YET. We continue to feel the presence of ISIS.” These are the words of Armenian Catholic Archbishop Boutros Marayati of Aleppo. He spoke by telephone with Aid to the Church in Need (ACN) following the Nov. 11 murder of Father Hovsep Bedoyan, parish priest of the Armenian Catholic parish of Saint Joseph in Qamishli in northeastern Syria

The archbishop said that Father Hovsep had been on his way to Deir ez-Zor to supervise the re-building work on the Church of the Martyrs there. “We are trying to rebuild the church and the houses of the Christians who used to live there, so that they can return to the city,” he said.

Father Bedoyan (43) was traveling by car together with three other people: his father, Ibrahim Bedoyan, a deacon and another layperson. The archbishop continued: “Shortly before they arrived at Deir ez-Zor, two armed men on a motorcycle overtook their car and opened fire.”

“The father of the priest was killed instantly, while Father Hovsep Hanna died later outside the hospital in Hasaka.” The deacon was also wounded, while the other layman was able to escape uninjured.

The incident is still being investigated. “So far we don’t know who killed him, although it appears that ISIS has claimed responsibility for the attack.”

“What we do know is that Father Hovsep was dressed in his priestly attire and was consequently identifiable as a priest, in addition to the fact that his car was clearly marked, in large letters, with the words ‘Armenian Catholic Church,’” said the archbishop. Hence it is entirely plausible that Father Hovsep was murdered because he was a priest and because of his efforts to re-establish the Christian presence in Deir ez-Zor.

“This is a very important town for us,” Archbishop Marayati stressed, “because it is there that many of our martyrs were killed as they fled the Turkish genocide of 1915. Today there are no Armenian Catholics left there. Undoubtedly, the Turks don’t want us to return, because our presence would be a reminder of the Armenian genocide.”

At midday local time Nov. 12, the funeral Mass for Father Hovsep Hanna was celebrated in Qamishli. The entire community was present, including many Muslims, with everyone wishing to demonstrate the unity and solidarity of the entire town.

It is a town that is now threatened by severe tensions, owing to the clashes between Turks and Kurds. The archbishop said: “The situation is chaotic. There are Turks, Kurds, Americans and Russians. Just yesterday there were three explosions.”

“The Christians are afraid; with every new outbreak of violence, many families are deciding to emigrate.” Before the war, there were some 5,000 Armenian Catholics and five churches in the region. Today, there are just 2,000 faithful and only two churches remain open.

Archbishop Marayati appealed to the international community: “All we are asking is that this war should end, but that will not be possible if people continue to help the terrorists and send arms to Syria.”

The archbishop also addressed Christians all over the world: “I beg you to pray for us and for our people, because at present we are living through extremely difficult times.”

With pictures of Father-Hovseb-Bedoyan (© ACN)