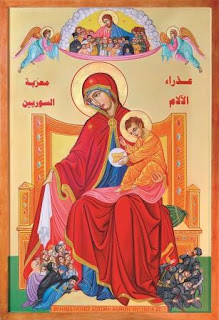 ON THE FEAST OF THE ASSUMPTION, Pope Francis blessed 6,000 rosaries earmarked for suffering Syrian Christians; on Sept. 15, 2019, these rosaries were distributed in Catholic and Orthodox churches throughout Syria. That same day, the Pope blessed a Marian icon that will travel the country.

Aid to the Church in Need (ACN) commissioned the icon of the “Blessed Virgin Mary, Mother of Sorrows and Consolatrix of the Syrian People” as part of the “Console my People” campaign of prayer for Syrian Christians sponsored by ACN alongside the Catholic and Orthodox Churches in Syria. The campaign seeks to comfort those families who had loved ones abducted or killed during the eight years of the Syrian civil war.

The 6000 rosaries, commissioned by ACN and produced by Christian craftsmen in Bethlehem and Damascus, were distributed in parishes across the country’s 34 Christian dioceses in commemoration of the feast of the Seven Sorrows of the Blessed Virgin Mary.

At Mass and during processions, the faithful’s prayers went out to those who were killed or abducted during the war and to their families. Some 2000 Christian families in Syria have lost one or more loved ones during the conflict and 800 families had a family member abducted.

Along with the rosaries, Bibles in Arabic—donated by ACN—were distributed, along with crosses made in the Holy Land of olive wood and blessed by Syriac Orthodox Patriarch Ephraim III.

Following the Pope’s Sept. 15 meeting with an ACN delegation, Cardinal Mauro Piacenza, ACN president, expressed gratitude to the Holy Father for “his affectionate closeness, as always, wherever there are tears to be dried, a sign of just how much the world needs compassion.”

He added that the feast of the Sorrowful Mother “offers us a lesson of true and profound compassion and maternal tenderness. Mary suffers for Jesus, but at the same time she also suffers with Jesus, and the passion of Christ is a sharing in the whole of human suffering.”

With picture of Our Lady of Sorrows, Consoler of Christians (© ACN)

Posted by EC Gefroh Posted 11:23 AM No comments: