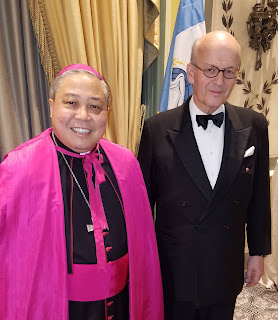 ARCHBISHOP Bernardito Auza, Permanent Observer of the Holy See to the United Nations and president of the Path to Peace Foundation, has praised Aid to the Church in Need (ACN)—the recipient of the 2019 Path to Peace Award—as “the leading organization in the world putting words to the persecution Christians are suffering in certain places and, even more importantly, responding with action.”

Speaking May 22, 2019 at the Path to Peace Foundation’s annual Award Gala at the Pierre Hotel in New York, Archbishop Auza said that the foundation sought to honor ACN “as a voice crying in the wilderness, echoing the voices of Christians crying out for help.”

The archbishop cited ACN’s biennial reports—Persecuted and Forgotten? and Religious Freedom in the World—as “the best reports that exist detailing, respectively, the ravages of Christianophobia,” as well as the state of religious freedom in 196 countries.

“The importance of the information these reports provide cannot be overstated,” said the archbishop, even as ACN “has done even a greater service by all their work on the ground.”

Archbishop Auza—who, as a young priest, received a scholarship from ACN that allowed him to study in Rome—noted in particular ACN’s work on Iraq’s Nineveh Plains, where the organization “is leading a what has been boldly called a ‘Marshall Plan’ for the rebuilding of houses, institutions, churches and lives in response to ISIS destruction.”

Accepting the award, Dr. Thomas Heine-Geldern, executive president of ACN International, said that the honor belongs to “those Christians who, just because of their faith, are persecuted, oppressed, discriminated or silenced.”

“Tonight, in lending them my voice, my hope is that their martyrdom is a little less silent.”

He continued: “Our work would not be possible without the unflagging support of our benefactors worldwide. We exist because of their extraordinary moral and financial support and we should keep in mind that it is often the mite of the widow which helps us.”

“Our donors are the foundation on which we build bridges of faith, hope and charity in support of the persecuted Church.”

ACN was founded in 1947 by a young Dutch Norbertine priest, Father Werenfried van Straaten (1913 -2003), to help meet the needs of refugees and displaced people in post-World War II Germany.

Today, ACN is a papal charity that supports persecuted and suffering faithful with more than 5,000 projects around the world each year.

Projects include the construction of churches and chapels; support for the training of seminarians, men and women religious as well as lay catechists; emergency aid; and transportation for clergy and religious.

Last year, ACN donors gave more than $100M in aid. Since 2011, ACN has provided more than $70M to support Syrian and Iraqi Christians threatened by ISIS and other Islamist groups, ensuring the survival of Christianity in the region.

“Religious freedom,” said Dr. Heine-Geldern, “is a fundamental human right. It is the responsibility of all nations and international NGOs to protect every individual’s right to religious freedom.”

“We must not give up the fight for the full implementation of this basic human right, which is inseparably linked to the dignity of every human being.”

Concluding his remarks, he said that “we all have an obligation to respond and show our solidarity with Christian communities suffering persecution, though in the end, the hardest job is not ours.”

“Standing with the faithful on the frontlines, confronting persecution, hate and violence, are courageous men and women—bishops, priests, women religious and lay volunteers. The ultimate servants of peace, they remain with their people. I also dedicate the 2019 Path to Peace Award to them.”

The Path to Peace Foundation supports various aspects of the work of the Holy See Mission to the UN. The Foundation also funds humanitarian projects in developing countries.

Previous recipients of the Path to Peace Award include: Cardinal Mario Zenari, papal nuncio to Syria; Prince Henri of Luxembourg; and Queen Sofia of Spain.

In his opening remarks, Archbishop Auza said that “the Holy See Mission would not be able to do what we have tried to do in defense of Christians at the United Nations were it not for ACN-USA’s steady and superlative collaboration.”

“We are committed to help persecuted Christians everywhere and we want to ensure that global anti-Christian persecution stays front-and-center in the news and public discourse,” said George Marlin, chairman of ACN-USA, adding: “We are calling on government and Church leaders to make the issue a priority.”

With picture of Archbishop Auza and Dr. Heine-Geldern (© ACN)