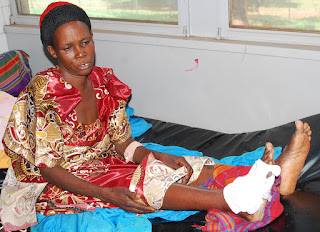 54-YEAR-OLD JESSICA Nansubuga, a Ugandan mother of five, lives with her family in Katanga, one of the biggest slums in Uganda’s capital of Kampala. For years, she struggled with her addiction to alcohol.
Today, she credits the Church with her sobriety. She told her story to Aid to the Church in Need:

“I was so addicted to alcohol that I would neglect my children; I also engaged in risky sexual behavior. I could hardly fall sleep without gin; I sold everything we had so I could buy more alcohol; my husband left me because of my addiction.
“Living in a slum only made my situation worse and my family more vulnerable. My children dropped out of school and started working as porters. I didn’t care about whether or not they had eaten; all I cared about was drinking. I even had sex in exchange for alcohol; most of the time, I was drunk and didn’t know who I was sleeping with. Nothing else mattered.
“In August of 2016, I became sick and lost weight rapidly. I assumed that it was a result of overdrinking and a poor diet, but I had actually contracted HIV/AIDS. I hated myself, and at one point I considered suicide.
“That is when local health workers urged me to stop drinking and referred me to the Serenity Center, a rehabilitation clinic that was started by Catholic missionaries to treat alcohol and drug abuse in the community.
“There, before I began my antiretroviral treatment to treat HIV/AIDS, I was counseled by a Catholic priest named Father Richard Kyazze. Brother Emmanuel Mubangizi, the Center’s executive director, encourages all HIV-positive addicts to return to Christ and pray for the Virgin Mary’s intervention.
“We struggled to stop drinking, but the Church was on our side and helped bring about our full recovery. Most Center employees are Catholic, and they educated us about living in harmony with spiritual principles, even as they respected our own views. We also learned about the many dangers of alcohol, including domestic violence, liver disease, cancer, and an increased risk of HIV exposure.

“I continue to benefit from the Center programs—like regular counseling and psychiatric evaluation, family education, detoxification, and post-treatment programs—which have reunited me with my family.
“What’s more, some of us have been trained to become a tailor, cook, or how to work with computers so that we can support ourselves and more easily rejoin society.
“Thanks to the Church’s intervention, my life has been restored, and I am able to fix what went wrong at home as a result of my drinking.”

With picture of Jessica Nansubuga (© ACN)