ACN News -For a Catholic single mother in Pakistan, life is very difficult 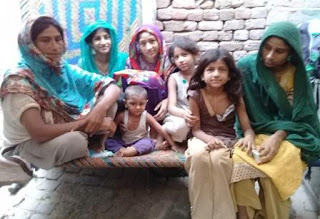 Rubina Bibi (38) is a Catholic widow and mother of five. She lives in Sargodha, Pakistan. In 1998, she married Boota Masih, who has since died. Today, she lives in a dilapidated house, which has only one room, and which lacks basic necessities.  She has no regular income, though she works as a maid, earning just enough to provide meals for her children. She worries about their health and security but cannot afford a better home. Rubina’s story provides a snap shot of the life of an impoverished Christian in Pakistan.

“My name is Rubina Bibi. My husband’s name was Boota Masih. I belong to the Catholic Church and was baptized by a priest in the Sargodha parish. My husband was a laborer and received daily wages; after we married, we lived in a rental home.

“We survived very poor conditions. My first daughter, Rimsha, was born after two years of marriage; after her, we had four more daughters. My husband died suddenly of a heart attack prior to the birth of our fifth child. At the time, my eldest was only 12.

“After my husband’s death, life became harder, more laborious. It was very difficult to raise our children without his support, so I decided to get out of the house and found work as a maid. Being a woman, I face many hurdles and challenges while on the job; it is hard to provide necessities for the family.

“My children were studying in a nearby school, but they were expelled because I could not afford the tuition payments. I looked for other schools in different areas of the city and found one run by Pakistan’s Presbyterian Church. They offered a free education and access to hostel facilities.

“With the help of a local pastor, my children were admitted to the school, and my request for access to the hostel facilities was approved. But my desire for a son remained a source of distress; that longing was fulfilled when my brother gave me his newborn boy to raise.

“To provide meals for the family, I work from 9AM to 5PM, but I do not have enough for our rent. We no longer receive help from our local pastor, and my home is in bad condition; the owner of our house will not pay for its reconstruction.

“I ask for your prayers and God’s encouragement, and that my children, with their education, will one day be able stand on their own two feet.”

Through original reporting, Aid to the Church in Need aims to give donors a glimpse at the lives of ordinary Christians living out their faith in often very challenging circumstances. These stories give a human face to the persecuted Church around the world, so many of whose faithful suffer anonymously.

With picture of Rubina and her daughters and adopted son (© ACN)