ACN News -In North Korea, despite hostile regime, the faith clings to life 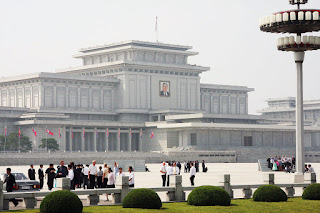 FATHER KANG JU-SEOK is director of the Catholic Northeast Asia Peace and Cooperation Institute, which is based in Paju, in South Korea. The aim of the institute is to study peace-building methods in Northeast Asia and to work for the evangelization of North Korea.
As we know very little about North Korea, can you give us a picture of the day-to-day life in this country?

North Korea is often just seen as a security problem, headed by an irrational dictator with missiles. And often we miss out on the story of 24 million ordinary people who are living their lives in that country. In fact, we don't know much about their stories.

Nonetheless, according to the refugees from North Korea, people are no longer able to function within the state socialist economy—there is the lack of food rations, for example—and so the people have started smuggling goods back and forth across the border with China.

Many refugees report that there is more foreign information and more foreign media seeping into the country. More North Koreans have access to mobile phones, DVD players, and computers. Increasingly, they are secretly watching South Korean movies, soap operas, even Hollywood movies.

The country has about 24 million inhabitants, of which half live below the poverty line?

In the 1990s, many perished from starvation. We don't know the exact numbers. We think about 1 million people died in those days and today most North Koreans are suffering from extreme poverty. Because the North Korean regime has been violating the international rules concerning nuclear weapons, the UN sanctions have been in place for a long time.

I worry about the people, especially the poor and vulnerable, who suffer from those sanctions.

Few understand the political structure in North Korea, the personality cult of the Kim family. Can you explain?

Many experts say the country is a kind of religious group and that the people worship the Kim family. We don't know exactly the reason why people do this, how the system of the society works.

One thing that we can assume is that the fear and hatred of the people [towards South Korea] could be a reason. During the Korean War 2 or 3 million people died in North Korea. The government of North Korea is still taking advantage of this trauma of their people.

Before the reign of the Kim family, the North Korean capital of Pyongyang in the early 1900s was such a source of Christian activity that it was known as the Jerusalem of the East. At its height, 3 out of 10 people in Pyongyang were practicing Christians and more than 2000 churches were built in the region. What happened to decimate Christianity so quickly?

After the North Korean regime took control, the government thought that religion was its most dangerous enemy. Therefore, they started to persecute religious groups in various ways.

Even before the Korean War, many North Koreans, mostly Christians, crossed the border seeking freedom of religion. In addition, before and during the war in which millions of people were murdered, Christians were persecuted without remorse.

Today there are four-state sanctioned Churches in Pyongyang: two are Russian Orthodox, one is Roman Catholic and one is Protestant. They exist as “proof” that North Korea tolerates religion. Are these just facades?

It is a complicated thing. The Catholic Church in North Korea founded the “Chosun Catholic Members Association” along with the completion of the Changchung Cathedral in 1988.  With the Changchung Cathedral in Pyongyang and the Association thus established, they began to represent North Korean Catholics, while the Church in South Korea began a series of efforts for the sake of inter-Korean exchange and support.

Over the past 20 years, those priests and Catholics in the South who have visited North Korea through various channels had opportunities to visit Changchung Cathedral and to attend Mass together with the North Korean faithful. Humanitarian exchanges and aid have also been going on through the Changchung Cathedral.

However, the reaction toward the North Korean Church varies among South Korean priests and faithful. Some of them were impressed by the liturgy in which they participated, while others have come to have suspicions. It is understandable that some would have such suspicions, asking: “Are the North Koreans who come to Mass at Changchung Cathedral true believers?”

In my opinion, the truth is that there are some genuine faithful among those North Koreans who come to Mass in Changchung Cathedral. Though attendees are mobilized by the North Korean regime, I believe that some of them are real Catholic faithful.

Do you have hope that one day Christianity will flourish again North Korea?

Yes. Not soon but very slowly, I believe that Christianity will come back to the North along with the reform and opening up of North Korea. The North Korean regime will not let down its guard against religions and missionary works so easily. Yet, I believe that the Holy Spirit will be with us and we will need to make continuous efforts, along with much patience.

With picture of government buildings in Pyongyang, the North Korean capital