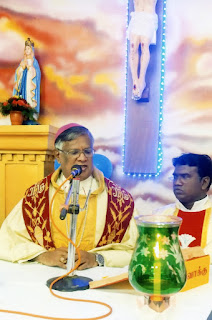 N THE SOUTH Indian state of Tamil Nadu, Christians are complaining about increasing violence and discrimination by fundamentalist Hindus. In early May, about 20,000 Christians of various denominations in at least 16 towns took to the streets to demonstrate against anti-Christian aggression.

Since the start of the year, there have been reports of more than 15 cases involving violent attacks in Tamil Nadu. But the suppression of the Christian minority in mostly Hindu India is also intensifying in other parts of the country.

The offenses range from acts of desecration in churches to the rape of nuns and even the murder of a pastor, which provoked major protests by the Christian population.

Thousands took to the streets. The victim, a pastor of an independent Christian Church in the district of Kanchipuram in the state of Tamil Nadu, was found hung in January after he had complained to police about cases of harassment by Hindus.

Bishop Thomas Paulsamy of the Diocese of Dandigul reports that Christians in Tamil Nadu feel increasingly under threat from radical Hindu fundamentalists. The bishop spoke to us of his extreme disappointment about the increase in violent attacks.

"We Christians actually cultivate good relations with Hindus, Muslims and other religious groups," the bishop said. "We travel together, eat together and live together. Many even come into our churches." At Christmas, for example, he said, thousands of non-Christians attended Catholic liturgies, including many Hindus.

However, the bishop said, a Hindu nationalist minority is disturbing this peaceful co-existence in this way. In Bishop Thomas’ neighboring diocese, mainly protestant churches have recently been attacked and Bibles burned.

Bishop Paulsamy is chair of the Committee for Disadvantaged Castes and Tribes at the Indian bishops' conference. There is a discussion currently underway, he reported, on how the Christian minority in India can be protected more effectively.

An inter-religious working group has already been created in which representatives of a number of religious minorities, including Muslims, discuss possible solutions together. In addition, more and more bishops are now speaking out publicly and have protested against Hindu aggression. "But they do so always peacefully, never violently," Bishop Paulsamy stressed.
Bishop Paulsamy believes the main cause of deteriorating relations between Hindus and Christians is the rise to power of Narendra Modi of the Hindu nationalist Bharatiya Janata Party (BJP). Before the BJP was in power, relations had been much more peaceful and harmonious, Bishop Paulsamy said.

Since Modi became prime minister, however, he indicated, fundamentalist Hindu groups have become increasingly powerful. "The BJP supports the fundamentalists," said the bishop.

According to its constitution, India is a secular and democratic republic. "All people have an equal right to freedom of conscience, and free profession, practice and propagation of religion," reads Article 25 of the constitution. However, Paulsamy warns that Prime Minister Modi wants to turn India into a Hindu country. He said: "He does not want the constitution to apply, but rather the religious principles and values of Hinduism."

Modi's ministers have repeatedly emphasized their support for measures intended to "protect" the Hindu religion, the bishop said. In the eyes of Hindu nationalists, religious minorities are seen as a threat, especially Muslims and Christians.

Following their electoral victory in 2014, the BJP government also wanted to reintroduce a nationwide anti-conversion law—a move which blocked by the law and justice ministry, which argued that any legislation from the central government which restricts the free choice of religion is a violation of the constitution.

Even so, anti-conversion laws are in force in seven of 29 Indian states. Conversion was also banned in Tamil Nadu, a state with a comparatively high proportion of Christians at 12 percent of the population.

Though the law has been rescinded, the government frowns upon conversions. It is unlikely that the Modi government will abandon efforts to impose a nationwide conversion ban.

National elections are slated for May 2019. The opposition is trying to form a coalition party to stand as one against the BJP. Whether this succeeds in challenging Modi's majority is far from certain. Christians may be faced with an additional five difficult years with the BJP in power.

If Modi and the BJP are re-elected, Bishop Paulsamy is certain discrimination against the Christian minority will continue. He concluded: "As long as the BJP is in government it will make life difficult for Christians in India."

Posted by EC Gefroh Posted 10:34 AM No comments: