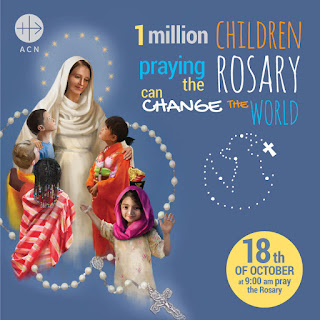 
SCHEDULED for October 18, 2017, Aid to the Church in Need (ACN) has launched the “One Million Children Praying the Rosary” campaign–in honor of October as the month of the Holy Rosary and to petition the Lord for peace in Syria, especially for the sake of the children in the war-ravaged nation.


ACN is calling for children everywhere to say the rosary on that day at 9AM on Oct. 18, in their respective time zones. That day, the rosary will also be dedicated to a prayer for unity and peace throughout the world. In many parts of the world, plans calls for an interruption in the classroom so that students can participate and pray along.


The children’s rosary campaign was initiated in 2005 in Venezuela. The initiators have placed their faith in a quotation from St. Padre Pio, “When one million children pray the rosary, the world will change.” This gave the initiative its name. The response from all over the world has been great. Last year, children in 69 countries took part in the prayer campaign.


ACN international president, Cardinal Mauro Piacenza, wrote in his letter of invitation to children everywhere to join in: “In 2017 especially, the 100th anniversary of the appearances of the Queen of the Holy Rosary at Fatima, the best thing we can do for peace in this world is to take the message from heaven seriously.”


“Is it not significant that God chose children in Fatima to be the recipients of the most momentous peace plan for the new age? The children understood the language of Our Lady and, most importantly, believed her words.”


“Shouldn’t we be doing so much more to teach children and support them in playing a part in this peace plan, a plan that is more topical than ever today?”

Materials for the prayer campaign can be downloaded at www.millionkidspraying.org

With picture of campaign poster (© ACN)


Founded in 1947 by Father Werenfried van Straaten, whom Pope John Paul II named “An Outstanding Apostle of Charity,” the organization is now at work in over 145 countries throughout the world.


The charity undertakes thousands of projects every year including providing transport for clergy and lay Church workers, construction of church buildings, funding for priests and nuns and help to train seminarians. Since the initiative’s launch in 1979, 43 million Aid to the Church in Need Child’s Bibles have been distributed worldwide.