ACN News - In Syria, the absurdity, cruelty of war continue 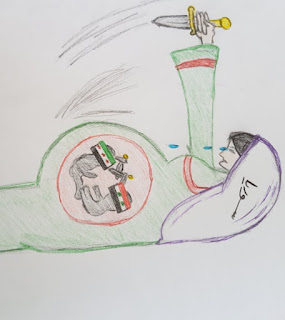 “Before the war, Syria was widely respected in the Middle East. Education and healthcare were free. Homs was developing very well; people were earning a reasonable salary, food was not expensive and many people could afford to buy a house or a car. I was studying to become a dentist.”

The speaker is Majd J. and she is a volunteer for a project funded by international Catholic charity Aid to the Church in Need to help families in need in the city of Homs. The eyes of this young Syrian woman shine brightly as she sits in her overcoat to protect herself from the cold—there is no heating in people’s homes. The windows in many of the houses are smashed because of the impact of missiles.

Majd relates how one family lost their son, who died of his illness for lack of medication, and how they now have another who has been diagnosed with cancer. Another family has just lost its father, who died of a heart attack as a result of the stress and suffering of the last few years. With tears in her eyes, she looks straight at me and says, very slowly: “I understand nothing of this conflict. Nothing.”

Many miles away from Homs, in the region of Zaleh, in Lebanon, where many thousands of Syrians have taken refuge—Christians and Muslims alike—the father of a family comments: “The cure has been worse than the sickness. There were problems with Assad, but what has befallen us since then with the Islamic State has been simply inhuman.”

“In the town of Rakkah we weren’t allowed to smoke in the street, and girls of six had to cover up completely before going outside. We were living in fear every day.”

Syrians continue to suffer, even though the media seem to have fallen silent since the conclusion of the battle for Aleppo. However, the situation in that city continues to be precarious. Electricity is scarce, and there is no steady supply of water—weeks can go by without; and there is a grave shortage of fuel for heating and cooking.

Wearing a scarf bearing the Arabic word for “Syria,” a pregnant woman is weeping. In her womb, two babies are fighting each other. The mother is holding a dagger, threatening to stab herself. This is one of hundreds of drawings sent to ACN by both Muslim and Christian Syrian children, who were asked to express their feelings about the country’s civil war. This drawing’s stark message is all too clear: Syria is continuing to kill its own.

Since the beginning of the conflict in 2011, ACN has committed more than $15M in aid to the suffering Christians of Syria, helping countless Muslims in the process.