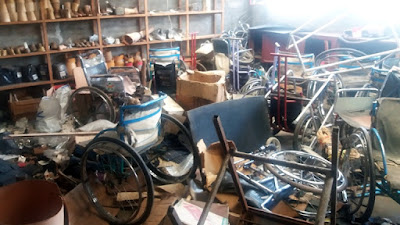 A Bishop in Ethiopia has expressed his horror after the Feb. 18, 2016, torching and looting of a Church compound by the very people being helped by priests and women religious.

In a message sent to international Catholic charity Aid to the Church in Need (ACN), Bishop Abraham Desta described how Gighessa parish—“one of the oldest and biggest parishes of the Vicariate of Meki”—was attacked by “the people for whom, and with whom, we work very closely.”

Bishop Desta, the Apostolic Vicar of Meki, described how villagers “including  young and old, women and children… started throwing stones and destroying Church properties,” including the rectory, diocesan pastoral center, a small Ursuline convent and a clinic specializing in care for the handicapped.

More than 55 people from around the world attending a conference on nursery education at the pastoral center were whisked to safety, but the Sisters stayed behind, refusing to leave patients at their clinic, until eventually they too fled the scene.

Having set fire to the rectory, the attackers made off with a year’s supply of food, as well as livestock including cows.

Bishop Desta added: “The Ursuline Sisters who run the clinic were left behind with the patients as they were not willing to leave the patients alone, but the people did not spare them.”

Having demanded that all the clinic’s goods be handed over, the mob “began to destroy and to take away everything including the personal clothes in front of the Sisters.”

The prelate reported: “Sad to say, no one went to help the Sisters, but by God’s grace they managed to reach Shashamane, the nearest parish, along with the patients and spend that night there. The patients are currently being cared for in Shashamane.”

“They have lost everything, except the precious gift of life that is being given freely by God almighty,” the bishop said.

The bishop expressed his shock that “all this [was] done by the local people whom [the Sisters] were serving, whom they know very well – if not all [then] at least a good number of them.”

The conference center was looted, the bishop said: The mob “carried away all that belonged to the center, including  more than 250 beds, mattresses, some 700 blankets,  bed sheets, bed covers, as well as washing machines, televisions, generators, copier machines, and computers—even the doors and windows of the” building, which was left completely damaged and barren.”

The attackers also seized more 26,455 pounds of food, including wheat, rice, and pasta—the center’s supply for the whole year. Cows and chickens, which were kept on a small holding attached to the parish, were also taken. The only building in the compound that was not attacked was the school.

Bishop Desta added: “Today there is a question in our hearts and minds. Why Lord? Why like this? I hope that in due time the Lord will give us an answer.” 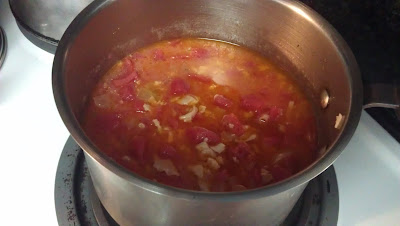 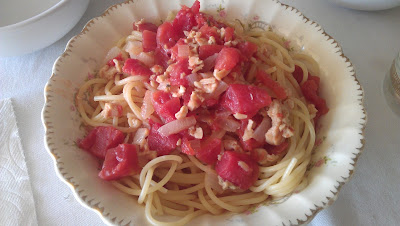 This recipe is easy and perfect for Lent because we are using canned clams.

2 small cans of clams (one minced and one chopped)
1 onion, diced
5 garlic cloves, minced
1/4 cup Extra virgin olive oil
1 large can of whole plum tomatoes
Pinch of red pepper flakes, or more to taste
Fresh parsley (I didn't have any but it does make the sauce better)
Salt and pepper
1 lb uncooked pasta, such as linguine or spaghetti, cooked and drained

Heat the oil in a pot and then add the garlic and onion.  Cook until the onions are soft.  Add the clam juice, but not the clams.  Add the tomatoes, making sure to either chop or crush with your (clean) hands before adding to the pot.  Season with salt, pepper and red pepper flakes.  Bring to a boil at medium high heat, then lower to low.  Simmer for another 10 to 15 minutes.  Then add the clams and chopped parsley.

Serve over hot pasta.
Posted by EC Gefroh Posted 11:46 AM No comments: 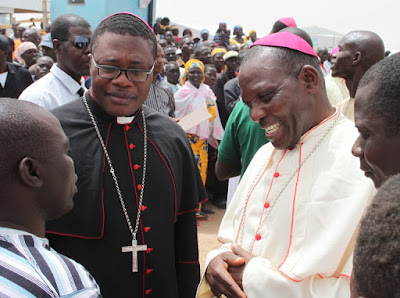