ACN News - Letter from Aleppo: ‘He was just 13 years-old’ 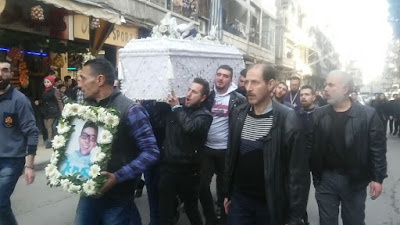 Letter from Aleppo: ‘He was just 13 years-old’

He was just 13, our poor Fouad Banna, this child whom we just buried—leaders of the Christian community, his sister Rosy, his close family members and myself. His two parents, both also gravely wounded, were not present at his sorrowful funeral ceremony, for they themselves are caught between life and death in intensive care.

The three of them were in their apartment Feb. 14, in the evening, when the building collapsed after being struck by one of the many rockets fired from the rebel side into our Christian quarter in the city of Aleppo. Of his immediate family the only one present at his funeral was poor Rosy, his sister, a young student aged 17. When I asked her if there was anything I could do to help her, the only thing she said to me was, “Father, I beg you, ask the Lord to heal my two parents.”

Rosy has been left terribly alone. She is in mourning, together with many other Christians. They have been devastated following this fresh tragedy that has befallen our innocent families in this city, ravaged by the continuing and savage bombardments by the jihadists who, after having destroyed everything we have, are now daily terrorizing the population and doing everything they can to prevent our people, who are innocent and peaceful, from simply living in their own homes—even to the extent of trying to wipe them out if they stay on in the country.

There were five people in the Christian quarter who were slaughtered along with Fouad that day. How much suffering and unhappiness they have subjected us to, for more than four years now, these brutal and pitiless assailants! They want to rule the world and claim to be obeying God in their attempts to impose, by force and violence, their outdated way of life and their archaic laws on every human being in the world. “Are you still there?” My friends ask me: “What are you waiting for to leave?”

The reason we are holding out, we Christians, despite everything that happens to us, is deeply rooted in the history of our Church, which is that of the earliest Christians. We have been here in Syria ever since the return of our brethren from Jerusalem, right from the earliest days. They had been baptized by the apostles themselves, as we are told in the Acts of the Apostles. We owe our origins to those Jews of the Diaspora who regularly made their traditional pilgrimage to Jerusalem for the feast of Pentecost each year.

Paul was baptized, confirmed, ordained to the priesthood and sent out to preach the good news to the world by our forefathers in Damascus. The Christians who are suffering here today are the descendants of Christian believers who have remained faithful to Christ for 2000 years and who had the courage to pay with their lives for their unwavering fidelity to the Church of the Word Incarnate.

Archbishop Jeanbart is the Melkite Metropolitan of Aleppo, Syria. He sent this letter to Aid to the Church in Need. 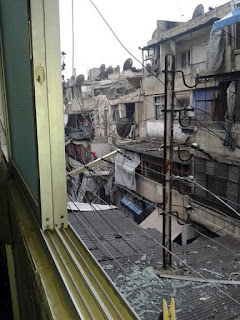 Jihadists may be to blame for cutting off essential water and electricity supplies in Aleppo, Syria’s second city, according to a local bishop who fears for the lives of those affected.

Bishop Georges Abou Khazen, the Apostolic Vicar of Aleppo, told international Catholic charity Aid to the Church in Need (ACN) that most of the city—which is undergoing persistent bombardment—have had no electricity for five months and at present have no water, either.

The bishop said these shortages were the result of targeted attacks and not just collateral damage as a result of the conflict.

He said: “I don’t know who – perhaps it was the jihadist groups – but they cut the electricity and the water, too. The whole population of Aleppo is affected by the lack of water and electricity.”

Bishop Khazen went on to he describe how extremists were behind the ongoing bombing of various areas of the city, including the Christian quarter. He said: “For the last 20 days we have been under bombardment, almost daily bombing, that is destroying many houses, many apartments, and causing many, many deaths.

“Every day, there are four or five deaths – some days as many as 10 are killed. And all this is the work of jihadist groups.”

Christian buildings have been targeted as part of the barrage that has affected all parts of the city. Bishop Khazen added: “Nearly all our churches are damaged and some of them are completely destroyed.”

“A few days ago, the Armenian Protestant church was badly damaged, and five days ago our Roman Catholic church was damaged, along with the pastoral center.”

The prelate charged that the continuing bombing was the work of Islamist extremists.
He said: “In the city these jihadist groups are occupying some quarters about a half– perhaps even two-thirds, of the city.”

Bishop Khazen described how badly the continuing bombardments were affecting those still living in Aleppo. He said: “The people are really very, very afraid because of this bombing. They just hope to see the end of it.”

“Just the other day a student, a little boy of about 13 years old asked me ‘Why do I have to study? I am going to die’ – so you understand how terrible things are here.”

Bishop Khazen added: “We have daily emigration. People are leaving the city every day.” The bishop said that, while there were no exact figures, at least 70 percent of the Christians had left the city since the beginning of the fighting.

He added: “We hope the ceasefire will work. But there are many, many groups affiliated top Al Quaeda or ISIS, and we think they will not observe this ceasefire.”

He continued: “Russia and others are pushing for negotiations, and many of the Syrians want this negotiation to succeed. But, as you know, we have thousands upon thousands of foreign fighters in the country.”

He said that despite this, Christian communities in Aleppo still “have hope – hope for us is like faith and charity – we cannot live without hope.”

“God is almighty, God is our father, and remember in the Old Testament how He saved a remnant of the people – this is what we hope for, too.”

Destruction in the Christian quarter of Aleppo (© ACN) 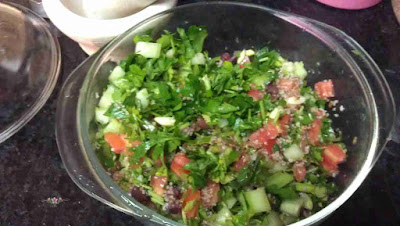 This salad is not only meatless, it is very healthy.  I will serve the Tabbouleh with Japanese Potato and Corn Croquettes. An easy recipe for that can be found HERE

When Bulgar Wheat has absorbed all the water, add all the ingredients, mix well.  This can set aside in the refrigerator for at least an hour for the flavors to blend together or you can serve it right away.
Posted by EC Gefroh Posted 1:28 PM No comments: 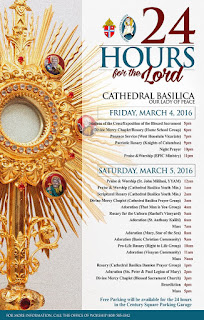