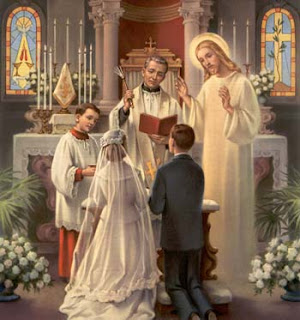 One of my sisters shared the following with me. I think this is great!

Dr. Anthony Esolen was recently a guest on EWTN's Life on the Rock. He is a good speaker. He has his Ph.D. in Renaissance English Literature.  The following are some points for young people to consider in a person before marrying them.

... So then, whom could you marry? A long time ago we came up with something we called "Esolen's Rules." They're only half facetious. But they are an attempt to get at the normal:

3. Don't marry anybody, man or woman, who says, "I'm going to call you at eight," and then leaves you waiting by the phone for an hour. Exceptions can be made for people who are kidnapped by Arabs, or who have epileptic seizures.

4. Don't marry anybody who insists on a separate bank account, bed, bathroom, vacation, or zip code. It makes no sense to be one flesh and two wallets.

Read the rest here
Posted by EC Gefroh Posted 11:53 AM

HAPPY ST PATRICK'S DAY TO YOU. God bless you.

This is great Esther, I'm so glad you shared!!

I've actually seen this list before, but it was much, much longer.

Me too Tracy. Glad you liked it.