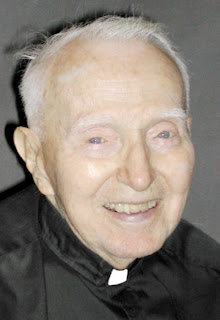 Today is one year since God called my good friend Father Duffy, home. He was called home on St. Joseph's Feast Day. How fitting! Because of my father's passing, I was not able to attend his funeral. I heard there were many priests in attendance that day. I know the homeschoolers were there. He had been our devoted spiritual director for many years.

I cannot pass by his street or think of his beloved St. Pius X Church without thinking of him. He was a wonderful and holy priest with a devilish sense of humor and a twinkle in his blue eyes. He was one of a kind.

If God willing, he is in Heaven right now, I just know is telling his old jokes.

I found his obituary that appeared in the Hawaii Catholic Herald. It was the first time I had read it. Patrick Downes, the editor, did a great job. I hope you take the time to read about this beloved priest.

May his Memory be Eternal.

Thank you Mimi. You are so sweet.