Gospel - 5th Sunday of Lent - The Woman Caught in Adultery 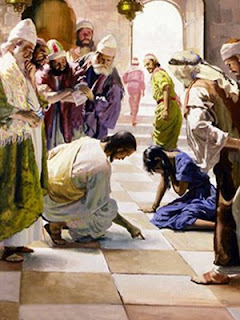 Jesus went to the Mount of Olives. But early in the morning he arrived again in the temple area, and all the people started coming to him, and he sat down and taught them. Then the scribes and Pharisees brought a woman who had been caught in adultery and made her stand in the middle. They said to him, “Teacher, this woman was caught in the very act of committing adultery. Now in the law, Moses commanded us to stone such a woman. So what do you say?” They said this to test him, so that they could have some charge to bring against him. Jesus bent down and began to write on the ground with his finger. But when they continued asking him, he straightened up and said to them, “Let the one among you who is without sin be the first to throw a stone at her.” Again he bent down and wrote on the ground. And in response, they went away one by one, beginning with the elders. So he was left alone with the women before him. Then Jesus straightened up and said to her, “Woman, where are they? Has no one condemned you?” She replied, “No one, sir.” Then Jesus said, “Neither do I condemn you. Go, and from now on do not sin any more.”

Father Romeo gave an interesting homily tonight based on the Gospel reading.

When the Pharisees and the scribes brought the adulterous women to His attention, Jesus was on the ground writing in the dirt.  Father illustrated the following point to us.  He said that when we do not like or are not interested in what we are hearing, we do not pay attention; we busy ourselves with other things.  This is what Jesus did by bending over and writing on the ground with His fingers.  He did not like what the Pharisees and the scribes were up to.

I thought it was interesting that the main question of that Gospel passage according to Father Romeo was not WHAT was Jesus writing but instead WHY was Jesus writing on the ground in front of the Pharisees and scribes.

Father went on to say that when we gossip about our neighbors, God will not listen to our prayers.  Prayers like those are not heard by God.  Just like Jesus would not listen to the Pharisees and scribes.

Another point Father made was the fact that Jesus referred to the woman caught in adultery as "Woman". Father reminded us that Jesus only called one other woman "Woman" and that was His own mother. Father said that Jesus was giving dignity to that woman by referring to her as "Woman".