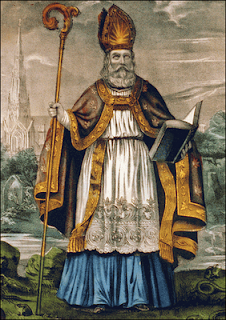 
What do we really know about St. Patrick? His background is shrouded in mystery. What we have heard often mingles myth with reality. To separate fact from fiction we need a closer look. We need to ask the real St. Patrick to please stand up.

In the fifth century A.D. an adolescent boy in Britain was kidnapped and enslaved by marauders from a nearby country. The youngster they captured eventually eluded his captors in Ireland, but several years later returned as a priest with the conviction that God had chosen him to convert that country to Christianity. That young Briton named Patricius died an Irishman named Patrick. Ireland and Christianity have not been the same since. Meet the authentic St. Patrick.

His life was clouded by legend, but peeling away the myth we discover that what is factually known about St. Patrick is far more interesting. He never chased the snakes out of Ireland, nor do we have any certainty that he used the shamrock to teach the Trinity to his converts.

The sequence of his life is not clear, and historians cannot identify when he was born, ordained a bishop, or died. But scholars agree that the two extant examples of his writing are clearly the work of the same man we today call Patrick.

The two brief compositions of Patrick, his Confession and his Letter to Coroticus, are the sources of all we know for certain about the historical Patrick.

The Confession, not really a biography, recounts his call to convert the Irish and aims to justify his mission to an unsympathetic people in Britain.

The Letter to Coroticus, an Irish warlord whom Patrick excommunicated, illustrates his power as a preacher, but yields little biographical information.

In a nutshell these are the biographical facts. Patrick was born Patricius in Roman Britain to a Christian family of some wealth. He was not religious in his youth, and claims he was close to renouncing his family’s faith. Kidnapped and taken to Ireland as a slave for a warlord, he worked as a shepherd for six years and then escaped. At home he began studies for the priesthood with the intent to return as a missionary to his former captors. Clearly he had committed his life to Ireland until death. By the time he had written the Confession, Patrick was recognized as bishop of Ireland by both the natives of Ireland and by Church authorities on the continent.

Two traits are patently evident in Patrick’s Confession: his humility and his strength. These characteristics are missing in early biographies and in the legends.

The missionary Patrick who returned to Ireland was a strong and vigorous personality. He was tough and determined. He had to be to pursue the vision that launched him in the evangelization of the pagan island. He was not the least bit reluctant to undertake this mission despite the fact that in 400 years no one had taken the Gospel beyond the bounds of Roman civilization. As each obstacle was encountered, Patrick mustered the strength to overcome it.

With limited education -- he was chiefly self-educated -- but with the grace of the experience of his enslaved exile, Patrick determined to do what no other had done in the previous four centuries of Christian history. He decided to bring the Gospel to the ends of the earth, and he planned wisely a way to do it. Unaided he figured out how to carry Christian values to the barbarians who practiced human sacrifice, who constantly warred with each other, and who were noted slave traders. That was neither simple nor easy to attempt. Most likely he hazarded this challenge of evangelization never before undertaken by the missionaries of the Greco-Roman world because the Christians of the continent did not consider barbarians to be human.

Patrick’s years as a slave had uniquely molded his attitude to mount a heroic effort to reach the minds and hearts of these untamed people. Patrick detested slavery, and may have been the first Christian leader to speak out unequivocally against it. The Church did not formally condemn slavery as immoral until the late nineteenth century. Patrick had experienced this suffering, knew how to suffer with others, and understood the sufferings of others. Compassion was his strong suit.

A more genuine advocate for the disadvantaged and the marginated of society than Patrick would be difficult to find. Without doubt he is one of the great saints of the downtrodden and excluded whom others shun.

In Patrick women too find an advocate. He speaks of them as individual human beings, lauds their strength and courage in the sufferings they endured in slavery, and respects them as handmaids of the Lord. Unlike most of his episcopal contemporaries, he might be the first male Christian since Jesus to speak so positively about women.

Patrick was convinced he had a God-given mission, and that Providence would see him through thick and thin. This gave him the will to return to the barbarians who had mistreated him. Patrick saw God at work in the world as a loving and benevolent Father.

Did Patrick accomplish his mission? At the time of his death human sacrifice had ceased, the Irish people abandoned the slave trade, and, although they had not stopped warring with each other, the battles were more restrained. Patrick knew these people would not change overnight.

This is the legacy left by St. Patrick: he had met the objective set by Christ, the Master of Apostles, to spread the Gospel to the ends of the earth. And his successors continued the pursuit of that objective.

As Ireland without Patrick is unthinkable, so too is life today without the saints. The saints are for the ages, ours no less than others. Without saints life would be miserable. The saints are for everyone -- believing and unbelieving -- because they are the people who proclaim by their lives that life is valuable, life is worth living, that a provident God cares for us. Without them life would be a series of disasters. St. Patrick personified this Christian hope.
Posted by EC Gefroh Posted 10:30 AM

Holy St. Patrick, pray to God for us.
A blessed day to you!

and to you to Mimi! Sorry I am a bit late.