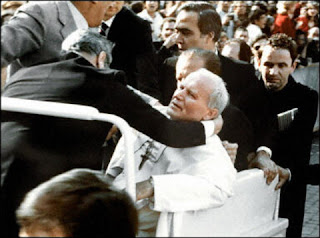 I know just about every Catholic blog is or has posted this story of John Paul II's instructions to the medical personal, after he was shot and was waiting surgery.

I am sharing it with you because it reminded me that when my father was dying, my mother gave the doctors and nurses repeated instructions to not remove my father's brown scapular, no matter what. My father died with his scapular on. It is almost a year since I  shared the story of my father's happy death.  He was not what one would consider to be a devout Catholic because he did not attend Mass nor did he go to confession in a long time. His dying with the Brown Scapular along with the anointing of the sick gave my mother and his children, the reassurance we needed and prayed for over the years, that our beloved husband and father would one day be in Heaven through the infinitely divine mercy of God. 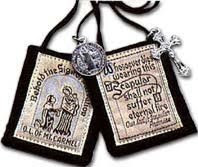 I shared the story of Pope John Paul II's instructions of not having his brown scapular removed, with my husband and mother yesterday. My husband told me that his dying father, who died two months after my own father, thanked the medical personal for letting him keep his Brown Scapular on. Unlike my own dear father, my father in law, was a devout Catholic. Yet, my husband too was very comforted knowing his father died with his Brown Scapular on.