Book Review - No Turning Back: A Witness to Mercy 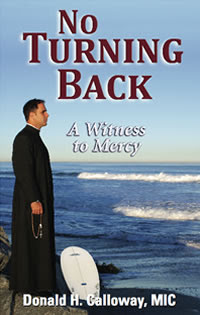 "Amid the fiery splendor of all the glorious seraphim, Mary was crowned Queen of heaven's Angels and Saints.  But she is the Immaculate Queen of earthly sinners as well.  The world is full of her prodigal sons who scorn their Mother's house and waste their substance in riotous living, feeding their souls on the husks of sin.


Meanwhile their Mother "watches from afar off," praying endlessly for their repentance.  If they take one step only toward her, she runs the rest of the way to meet them.  The grace of repentance, which Jesus won for sinners, is given to them through Mary.


Habits of sin can be broken in Confession-if I have real sorrow.  I should ask Mary for it often."

The above reflection could have been written by Father Peyton with the young Donald Calloway in mind.

By now, just about every Catholic should be familiar with Father Donald Calloway's incredible...actually, miraculous story of conversion.

Some have referred to Father as a modern-day St. Augustine.  In actuality, even at his worst, St. Augustine could not have been as bad a boy as then Donald Calloway was.

I first heard Father Calloway's story on a DVD.  Then Father came to personally give testimony on his conversion at two Divine Mercy Conferences on Oahu.  In fact, when Father introduced himself to his audience, he noted that he did not think anyone had ever heard of him.  My son and I were thinking "not true, Father, not true".  At both conferences I asked around for his book on his conversion.  Surprisingly, at that time, there was no book on his conversion!

Father Calloway finally wrote about his conversion story in his new book No Turning Back.

Let me tell you: this is no run of the mill conversion story.  This is not a preachy conversion story with lots of scriptural references.  Although I appreciate other converts' stories like that, I personally find it a bit boring.  Father Calloway's book or story is not by any means boring!

More than half of the book's 262 pages are filled with Father's past life and bad experiences.

Right away Father starts off describing in vivid detail his infamous arrest and expulsion from Japan as a mere teen.   As I read this part of the story, I was thinking to myself...."He would have been so punished, if he were my son!"

Father Calloway has a writing style all his own.  He writes as he speaks.  He writes as if talking one on one to a friend.  The book is an easy read not only because of the writing style, but because of Father's riveting life story.  I had to keep reminding myself all his experiences happened before he was even 20 years old!

Sometimes, Father's shares something that would just crack me up because I found it to be very funny.  I am not sure whether or not Father meant it to be told in a humorous way, but he really had me laughing and sharing some parts with my whole family, which then had them laughing.  Because I have heard Father speak in person, I am guessing he is naturally funny.  The part I am referring to here is his time in jail in the United States.

Another thought I kept having as I read the book is "I can't believe the guy in this story is a priest!"

Although Father did not shy back when sharing his intimate details, he carefully used his words for the reader so as not to offend but I appreciated Father's candor throughout the book.  Father really wanted to be quite honest and open in portraying his past.  This fact will make his conversion even more meaningful and will really impact the reader, especially if you are not familiar with his story.

Divine Mercy is so evident in the life of this now famous priest.  It can only have been through God's Divine Mercy and of course, through Mary, that tough little guy, anti-Christian Donald Calloway, fully repented and gave his life to God and His Mother.  Father Donald continues to spread the necessary and important message of Divine Mercy wherever he is or wherever he goes.

It was at the first Divine Mercy conference that my son asked Father if he can now return to Japan.  At that time Father said he did not know.  For Japan's sake, I hope he can go back.

For more information on Father Calloway or to order his book please check out his website here.
Posted by EC Gefroh Posted 4:06 PM

Nice book review. I heard Fr. Calloway speak at a local parish shortly after he was ordained. I've also listened to an audio version of his DVD.

He was on catholic radio the other day...maybe you heard him.

I agree with you it's hard to believe he is a priest, and ...it's not possible St Augustine was as bad as Father Calloway.

If you don't mind I am going to link to this on my blog. Eventually I'd like my blog to have conversion stories as it's primary focus and my Contemplative Catholic Reflections blog will focus on the spirituality mothers and others need to maintain in order to best help their loved ones come home.

Thank you for your comment on my "new look"...and by the way I hope it is ok I am using one of the tags you made. If not let me know and I will remove it.

I pray you have had a holy Lent thus far.

God bless you in your ministry.

Aloha Patty:
Glad you liked it. Please be my guest on both counts. Thanks so much!

I saw an ad for this book the other day . . . your post confirms God must want me to read it. I'll get it straight away. Great review!!! Mahalo!

The conversion part of the book is just as good!