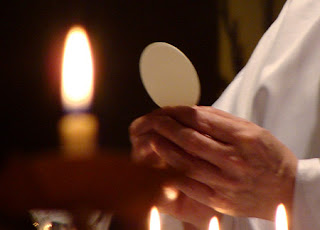 It started with this reporting by Deacon Greg regarding Jack Chick tracts being passed out by a Baptist minister in Tennessee. One of Father Z's reader's alerted him to the following letter to the editor of the Diocesan newspaper in Knoxville regarding Father Flaherty, the priest interviewed in the original story.


Father Jay Flaherty, the pastor of Holy Cross Church in Pigeon Forge, gave a heartfelt message on Jan. 2 so profound that it’s worth repeating. He said “I am no longer Father Jay, but Father Flaherty.”

He began by explaining the Catholic Church’s rules for Mass and the Eucharist, and addressed parish volunteers. He reminded us of God’s presence in the tabernacle. There’s a family-life room for visiting, eating, and unruly kids, with Mass on TV.

He spoke of growing disrespect for the host, such as the time one was found with a cough drop stuck on it. One must fast for one hour from food, drink, or chewing gum before taking Communion, Father said. “And if I or the eucharistic ministers see any of this, that person will not receive Communion. Don’t leave early; stay until Mass ends!”

Father addressed respectful attire, especially for ushers and those on the altar: ties, long pants, dresses, and no shorts. Latecomers must wait outside until after the homily, because “I do not use notes, and I get distracted.”

He ended by saying, “If you don’t like these changes, you can go worship elsewhere. You can complain to the bishop or go all the way to the pope.” As a priest, Father Flaherty is accountable for how he leads his flock to God. You could have heard a pin drop during his homily, but the congregation applauded at the end in agreement.

He had hit the nail on the head. I hope his message resounds throughout the diocese.

I like this article Esther! Speaking plainly sure hits home for me. I hope more Catholics can hear this message and heed it.

I know several parishes that could use this message. I pray that the "good priests" test their bishops...maybe they need to have their eyes opened by their flock.
Let me change a quote around that recently was in the paper......
I'll forgive the bishops lack of common sense and respect for the church and the Body of Christ if he accepts my good manners and love of the church and Eucharist given to us by Jesus Christ.

This is amazing! Me and my family go to Pigeon Forge a lot, and we almost always go to mass at that church. When I saw the title I wondered if it was our Father Jay, and it was! :)
Thanks for posting!

Michelle, did you hear that particular homily?

No, I wish I had.
We did hear a very good homily by him against abortion though, during one of my family's last vacations there.

Michelle, BTW, I visited your lovely blog today. I couldn't leave a comment though.

Thank you!
I just set it up where anyone can comment now. :)

AMEN. It never fails to amaze me how the adults (who definitely should know better) don't adhere to the fasting before communion. And the girls who are allowed to come to Mass in shorts and tank tops/off the shoulder blouses! Amazing.

Mary, I know. It is a problem here too.

Wow, good for Fr. Jay. Our priest, Fr. Ed, is an easy-going person in general but is very strict about communion, and if he sees someone being disrespectful in any way, he simply stops passing out the host for a minute and corrects that person. (It only takes one correction!) We do have some folks leave right after communion (although I have never seen anyone leave before communion); I am always surprised by that because for me the best time is right after communion when Fr. Ed gives us time to spend in silent prayer; that time with God is sweet, and anyone who leaves early is really missing a lot.

Elizabeth, Father Ed sounds like my kind of priest!